Destroy All Monsters: THE LONE RANGER and (Despicable) Me 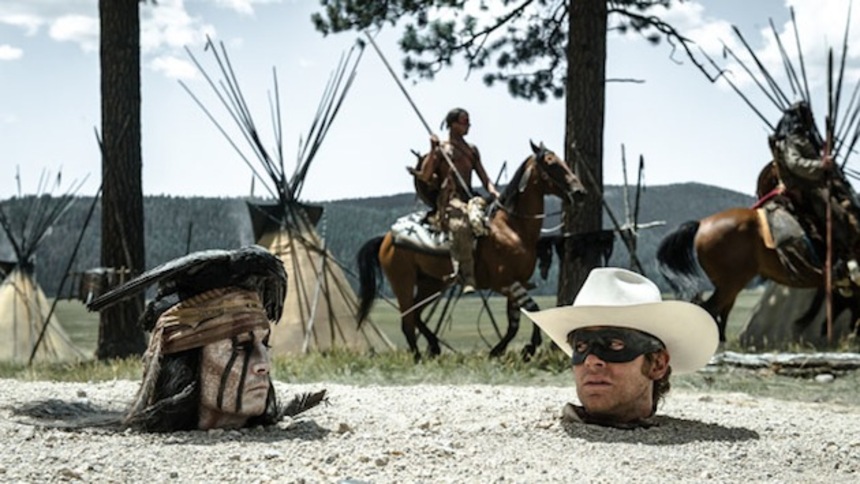 Hollywood loves a bomb almost as much as it loves a hit, and no bomb has been pre-approved for consensual bombhood like The Lone Ranger since last year's John Carter (formerly Of Mars). Scraping a measly $49M off a very long weekend and falling ignominiously also-ran to no less welterweight a competitor than Despicable Me Too, Gore Verbinski's revisionist/revival Western will, barring any sleeper bombs yet to be revealed, likely be recorded as the defining financial misfire of Hollywood's 2013.

Before long, we're all going to wish The Lone Ranger was a much better movie, because despite its blazing lack of popular appeal, it's still the most interesting thing to come out of Hollywood's moribund summer, and conversations about interesting things are easier when they don't have to be prefaced with something along the lines of "I know the movie has problems, but..." Sure, The Lone Ranger has problems. It's sloppily plotted, takes forever getting through its corpulent second act, and at the end of the day, its stable of characters aren't themselves charismatic enough to wade us through the murk like their Pirates of the Caribbean counterparts did.

But when it works, The Lone Ranger is trying for something truly amazing, and if it only gets there for a total of about 45 non-consecutive minutes, everything else about the attempt -- what the film is trying to do -- is itself a more audacious project than any Disney summer movie bankrolled at $250 million has a right to be in the second decade of the 21st Century.

Enjoy it while it's here, folks: The Lone Ranger is likely the last revisionist/revival $250M blockbuster to be made in 2-D, possibly ever.

In a summer writ large with American icons trying, and failing, to find their sea-legs in the United States' troubled 2013 (see also: Superman, James T. Kirk, and Will Smith), The Lone Ranger is a daffy, halfway-successful inquiry into the roots of a country's wobbly virtue. As a revisionist Western, it ain't Rango, and as an inquiry, it certainly ain't Django Unchained. But The Lone Ranger's sad survey of modern America's Quixotic relationship with imaginary heroes -- and simultaneously, willful blindness to the magnitude of race-based carnage upon which the country is built -- is both chilling, and chillingly inappropriate given the Disney milieu.

The saddest moment in The Lone Ranger, by far, comes right at its beginning, when a brown-eyed moppet wanders into a carnival sideshow and finds 100-year-old Tonto, fossilized behind glass as a standing representative of "The Noble Savage." Tonto opens his eyes and whispers "Kemo-Sabe...?" with such unabashed longing for his erstwhile partner that one instantly intuits the breadth and magnificence of the man's connection to his lost best friend, and the horrible vacancy that John Reid's presumed passing has left in Tonto's world.

This framing narrative is set in the 1930s. It could not be set now, and not for reasons having anything to do with the credibility of Tonto's advanced age. The frame couldn't be set now because the kid couldn't exist now; because there are no 8-year-olds wandering around the modern world wondering what ever became of the Lone Ranger. Any kid wondering such a thing would have to have been the elder Tonto's age by the time The Lone Ranger hit theatres last Wednesday. To borrow from Matt Zoller Seitz, The Lone Ranger is a film with no constituency to speak of.

Much of the reporting on the Ranger's box office disaster has focused on just this latter fact, as though Verbinski, Depp, Bruckheimer and Disney all suffered some sort of consensus mass hallucination wherein they genuinely believed that a vast and underexploited Lone Ranger fan base was waiting on tenterhooks for this film to appear. I won't bother to speak for Bruckheimer or Disney's motivations. In the case of both the director and the star, though, I don't see The Lone Ranger puffing into existence out of some colossal misunderstanding of their film's value proposition.

Instead, I see a point.

From the framing sequence at the sideshow, we enter the film proper by way of Tonto/Depp's muggish narration. We continuously and conspicuously return to the sideshow in the 1930s just when shit's getting good throughout The Lone Ranger -- a sideshow in locale, theme, and perhaps by inversion, purpose. This is more than a cheap trick to grease the rough transitions that occur whenever Tonto's granddaddy of a yarn about the hero of the American Old West starts spinning out of control. We are being consistently reminded that the story is being told from a point in time when a lurking genocide will turn all of The Lone Ranger's native American characters into (metaphorical) sideshow oddities like centenarian Tonto himself.

It's the same genocide which will, in anticipation of some larger questions about The Lone Ranger as a whole, make it impossible to find a marquee Hollywood movie star to play Tonto who is more than (perhaps) one-quarter Cherokee. Depp is there to remind us of this, just as much as he is there to delve into the curious mix of outright racism and more pathological stereotyping that creates a character like Tonto in the first place. Depp is, whether you like it or not, the reason this movie exists at all; no Depp, no Ranger. After flopping in The Rum Diary, Dark Shadows, and now Ranger, Depp's brand (and his Infinitum Nihil production company) may be at the tail end of its bankability. But for now, Johnny Depp's Tonto is the reason Disney could, and did, shell out $250 million on something as defiant as The Lone Ranger. As pirate heists go, that's a pretty good one, Captain Sparrow.

Tonto painstakingly tells the kid -- and us -- a tale of the hero of the Old West that consistently, persistently, stubbornly, refuses to be heroic. The Lone Ranger promises -- and delivers -- two state-of-the-art swashbuckling set pieces, both involving trains, conjured by the Hollywood director with the greatest personal ability to keep multiple plates spinning, while consistently reminding his audience of what's on which plate and why. They're beauts. But otherwise, The Lone Ranger seems to have very little interest in what You, The Viewer, might consider to be its value proposition at all -- or even in its principal character.

It happened on Batman and Superman: The Movie so I suppose it's a fair play; a Hollywood blockbuster where the titular character receives second billing in the credits next to a larger, supporting star. Never before has a titular character been more titular than the Lone Ranger in The Lone Ranger, here played by Armie Hammer as an awkward mixture of prat and doofus. This is one isolated-ass dude. He's not just alone (nearly) in his stalwart adventure to bring American justice to them thar hills; the Ranger seems to be alone in what kind of movie he thinks he's in.

The Lone Ranger is a movie not about mythmaking, but about the implausibility of mythmaking. The mythmaking is all delivered by a character, Tonto, who is the film's largest source of pathos while simultaneously being, in every conceivable regard, batshit crazy. The film isn't about the greatness and grandness of the Old West, as Westerns tended to be at least up until the 1970s. It's about something that has already ended, already been swept away, as Hans Zimmer's particularly exquisite score continuously reminds us.

It's a startling moment, indeed, when the film's grand finale begins and the "William Tell Overture" finally explodes out of the soundtrack -- we'd almost forgotten it was in there, waiting to get out. In counterpoint to the "Hi-yo Silver!" shenanigans inspired by "William Tell" and the Ranger's charge across the rooftops towards a speeding train, we have Zimmer's "Home" theme, which crops up repeatedly throughout the rest of the film, and is as painfully nostalgic a longing for times gone by as any piece of music you could hope to find.

If the saddest moment in The Lone Ranger came at its beginning, the second-saddest comes at the very end. After the marquee credits roll, the remainder of the film's end credits play over a static shot of ancient and decrepit Tonto wandering into the painted backdrop of the American West, as the "Home" theme plays again, quietly, on the soundtrack. Is Tonto going home? Is home out there? Would it matter, even if it was?

The "William Tell Overture" it is the cheekiest, sunniest, most ridiculously ridiculous heroic music in pop culture history, and by the time it turns up in 2013, it is less a signal of the Lone Ranger's ascension to heroism than a perverse dirge about how such a thing simply isn't, and probably never was, possible. The Lone Ranger isn't about how there aren't any heroes any more -- it's about how we can't even imagine heroes any more. It's a revisionist Western about revisionism itself, and how sad revisionism is. Revisionism cured our naiveté and killed our wonder. Wasn't the world a better place when we could just fuck off to the movies and not worry about all this?

Do you feel this content is inappropriate or infringes upon your rights? Click here to report it, or see our DMCA policy.
Gore VerbinskiJohnny DeppThe Lone Ranger