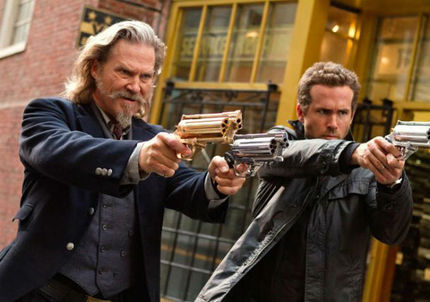 Alas, it comes the time in every summer when a high-concept, sci-fi themed comedy erupts on our screens in order to try to take our ticket money away from our stingy pockets. Some, like Back To The Future or Men In Black, worked to a certain extent. Others, like the rest of the mens in black [sic], not so much.

So it's mildly disheartening to report that, yes, R.I.P.D. is exactly as bad as you expected it to be from the trailer. For a film that uses the stench of death as a major plot point (allusions to "Bacon gone bad" being a core metaphor), it's hard not to be snarky about the work. And thus, despite at least some modicum of restraint, I shall be snarky.

The title refers to the "Rest In Piece Department", a heavenly police force for those seeking to recapture the dead that have escaped and are living on earth. When this is spelled out in the film, there's a sarcastic comment about being "clever". Alas, this moment of self-awareness from the script was quickly abandoned in favour of a rote version of the film that this one-note concept inevitably leads to.

But first, the parts that almost work: Director Robert Schwentke, who previously did the passable RED, has once again cast Mary-Louise Parker. She's the best part of this film, and between this and the role she handles in RED 2 (also landing this week), she's almost managing to single-handedly keep her respective films afloat. Schwentke isn't quite as deft this time with shooting action, but at least he kept a central part of his previous cast.

I admit to enjoying a few moments of levity with Jeff Bridges doing a mashup of "The Dude" and the Dude from True Grit, mostly in the form of his crotch-airing posture while driving a 70s sedan. The jokes, such as there are, are few and far between, but Bridges at least seems committed to the bit.

Kevin Bacon, on the other hand, seems like he's in another movie. Yet it's the star Ryan Reynolds who does the anti-Parker -- if she's the bright light in two films opening this week, when combined with Turbo Reynolds proves to be the dead weight in both. He's mugging for the camera, doe-eyed, through much of it, and simply can't be considered leading man material even in this kind of film. There's a tedium to the way he plays things that's frankly grating after a while, and save for a pretty-boy face, I'm at a loss as to why he's still starring in films.

The story is as silly as you probably can guess, but the almost inexcusably bad character animation, combined with gimmicky 3D and an unenthusiastic palette, makes the film feel cheap, despite what I'm assuming to be a relatively lavish nine-figure budget. Given the central plot device, this thing has bomb written all over it, and I'm not sure that audiences will stomach the banter for more than a few moments.

Then again, I've been surprised before. There might really be those craving for some Freaky Friday-meets-Heaven Can Wait via Ghostbusters fun, and I wish them luck with this work. For me, it was an exercise in will to stay awake throughout, with a sweltering theatre during a local heat wave providing little respite, crafting a muggy, infernal environment in which to stomach this so-called "film".

So, despite a charming Ms. Parker and her spunky white boots masking her ankles, it's hard to see R.I.P.D. as anything more than C.R.A.P.