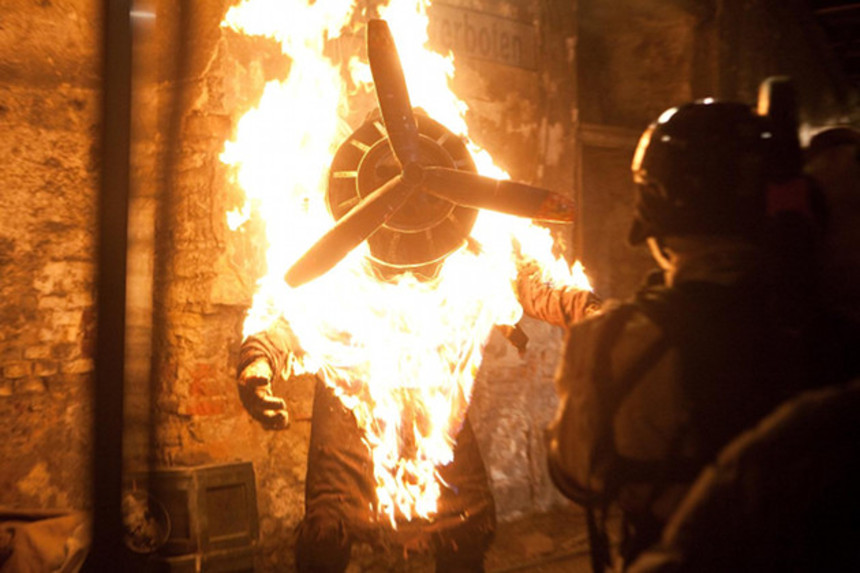 Ever since he released some impressive promo's and shorts, expectations have been high for a debut feature film by Richard Raaphorst. Now, several years later, it has arrived in the form of Frankenstein's Army. And similar to its own creation, the film takes quite some time to get going, but it still ends up being a whole lot of fun. This is the kind of film where "tripping over your own legs" doesn't necessarily mean they're still attached...

The story begins near the end of World War II. A Russian recon squad is sent on a mission to help comrades who seem to have encountered some trouble in a small East German village.

Upon arrival, though, nobody in the village is alive, the graves have been robbed, and some very weird-looking corpses are strewn throughout the landscape. Also, someone is jamming their radio signal. Then the Russian soldiers discover a factory of sorts ... and run into an army of Nazi monsters, stitched together from machines and corpses.

Let's get the elephant out of the room first: the rumors about Frankenstein's Army being a found-footage film are true. The Russians have a propaganda officer with them who documents everything with several cameras, and this means that, especially in the first half, you're treated to a whole lot of running-with-the-camera shots.

While there are some good jokes in there as well, and most of the monsters run towards the camera to get their extreme close-ups, it does mean that for some of the grander set pieces you get the feeling you're not seeing enough of what is happening. But later on in the film, the found-footage device starts to be used much more inventively and effectively. For starters, you finally get a good look at the monsters, who are the obvious highlight of the film. 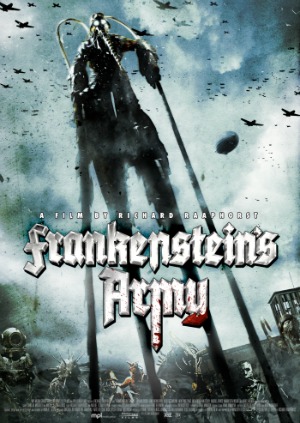 I visited the set last year and was amazed by the production design. The amount of love and detail which went into the creatures is astounding, so to see them now as brief blurry blobs when people are running with the camera through a dark cellar is dismaying. Basically, in the early scenes most of the monsters just look like someone wearing a tarp, a helmet and some weird gloves.

Fear not though: Raaphorst's WICKED designs get their place in the limelight later on. Frankenstein's Army really comes into its own when the disappointing first half gets capped with a very good and very funny second half. A lot of that has to do with the Frankenstein character appearing, a fantastic Karel Roden who seems wasted in the role until he suddenly starts to shine with an evil glee.

In fact, the finale comes closest to what we've been waiting for all these years: a creature-fest with an insane maniac in a Gothic laboratory. It takes a bit of a wait to get there, but at the end the icky gore goes through the roof, the monsters rock and the jokes connect.

With its found-footage look and scary monsters showing up aplenty, Frankenstein's Army resembles a ride though a carnival's haunted house. Thankfully it's a good one, though, and while the film has a literally shaky start, the finale had the audience intentionally in stitches.

And I hope Raaphorst will get the chance to make a few more of these, as his imagination obviously goes beyond the scope of what was possible in this single film.

[Full disclosure: Todd Brown, ScreenAnarchy's founder and editor-in-chief, served as a producer on the film. He was not involved in the editing of this review.]

Review originally published in somewhat different form during the International Film Festival Rotterdam. Frankenstein's Army opens in select theaters in the U.S. on Friday, July 26, and will also be available to watch via various Video On Demand platforms. Visit the official site for more information.