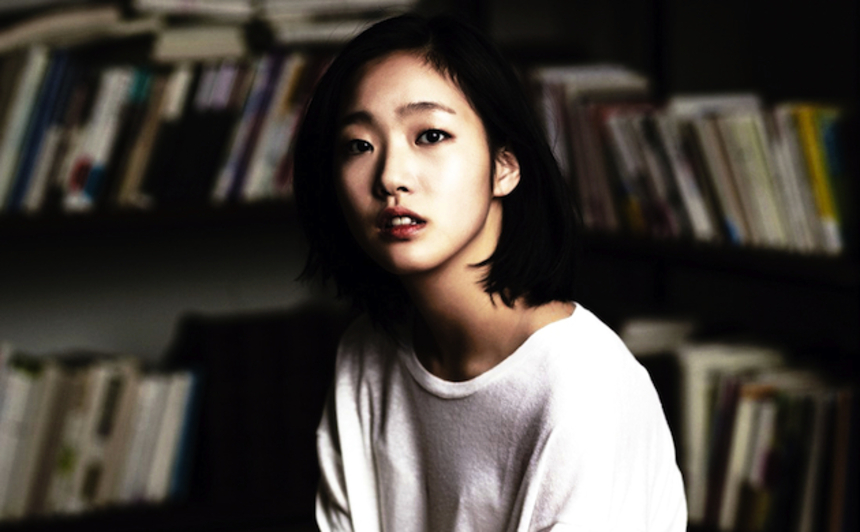 Plucked from relative obscurity to play the title character in Jung Ji-woo's adaptation of Eungyo (A Muse), the controversial and popular Koren novel by Park Bum-shin, Kim Go-eun is no doubt now a star in her native country winning nearly a dozen accolades for her role as the 17-year old muse of a 70-year old poet, including nods from the Bull Awards and the Korean Association of Film Critics. Kim sat down with Diva Velez this past week in New York to discuss her breakout role, her working relationship on set with Jung and what's next on her own creative horizon. [ed. Ben Umstead]


The Lady Miz Diva: What has it been like for you to hear the NY audience's reaction to your work?

Kim Go-eun:  I was very thankful and I liked it a lot.

LMD:  Can you tell us about how you got the role of Eungyo?

KGe:  I had an audition.  I knew one of the set members in the film from school.

LMD:  I think it is a very brave role for anyone to take, much less a beginner.  What did you think when you first read the script and saw how explicit it would be?

KGe:  I was afraid.  It was very burdensome, but I felt like I wanted it.  The role of Eungyo is someone who has to lead throughout the movie.  She appears in every scene.  So I felt that I didn't want to embarrass the crew and it felt a bit burdensome because of that. {Laughs}

LMD:  What was it like to tell your friends and family what they would be seeing onscreen?

KGe:  I talked to my friends and family a lot before taking on the role.  It wasn't like, "Oh, you're going to be seeing this on the screen."  I had a lot of conversations with my parents, so they were ready. {Laughs}

LMD:  If you had to describe Eungyo to someone, what would you say?

LMD:  How did Director Jung Ji-woo make shooting the graphic scenes easier for you?

KGe:  They used the least amount of crew members on board and the director didn't shout "Cut" all the time; "Oh, let me get it from this angle, let me get it from that angle."  We went for one take, so I was ready to act with the actor and go with the flow and the camera director was able to shoot it to make it more comfortable.

LMD:  Was there a lot of rehearsal or reading time with Mr. Park Hae-il & Mr. Kim Mu-yeol?

KGe:  We had about three readings.

LMD:  Director Jung said some lovely things about you in our interview today...

LMD:  He said your personality informed the way we see Eungyo onscreen.  Was he open to your suggestions? Did you improvise at all?

KGe:  All of his commands or suggestions, they weren't forceful.  He was able to fence me in a big field, so I was able to run around and do whatever I wanted to, but if I wanted to go over the fence, he stopped me a little bit.  But I wasn't very caged in where he gave me every single direction to every scene.

KGe:  A month before I did the shoot.  It was helpful.

LMD:  Like a lot of girls her age, Eungyo's very flirtatious, especially when she is one-upping Seo Ji-woo.  Do you think she was aware of the feelings she brought about in these men, especially the older poet, Lee?

LMD:  As the film goes on, we can see the physical change in you as the person embodying the character and Director Jung has said he felt you matured a lot during the filming.  Did you notice or feel any change in yourself or understood things you didn't before?

LMD:  The film has been compared to Vladimir Nabokov's "Lolita". Have you read that novel or seen the films?

LMD:  I read that you were drawn to filmmaking after watching Chen Kaige's "Together", has working with Director Jung brought back that interest?  Are you interested in writing or directing as well as acting?

KGe:  I'm very introverted and shy even though I've become an actress.  I'm very shy.  When I first got to my high school, I didn't go there because I wanted to become an actress.  I was interested in the film industry.  So when I went there, I had to write a screenplay and I had to shoot a film.  But for now I don't want to think about anything else. {Laughs}

LMD:  Has this experience whetted your appetite for more acting?

KGe:  I'm very thankful for the film Eungyo because it made me long to become a better actress.

LMD:  Since this success is so new, has there been anything surprising about transitioning from an unknown?

LMD:  Please tell us what is next for Kim Go-eun?

KGe:  I'm filming now.  We'll be done in the middle of July.  In September, I begin a new film.

This interview was cross-published on Diva's website The Diva Review

Do you feel this content is inappropriate or infringes upon your rights? Click here to report it, or see our DMCA policy.
EungyoJung Ji-wooKim Go-eunKorean filmNYAFF