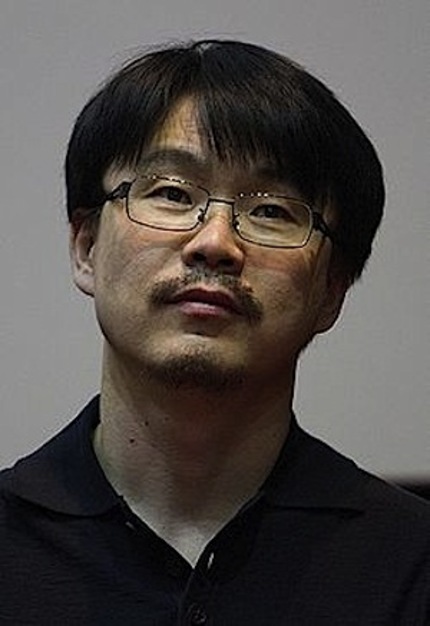 Jung Ji-woo, best known around these parts for his 1999 film Happy End, and as screenwriter for the 2010 thriller Moss, was in New York this past week for the screening of his latest film as director: Eungyo (A Muse). Diva Velez sat down with Jung to talk about his process adapting a controversial and popular piece of literature, turning 35-year old actor Park Hae-il into a 70-year national poet, plus working with newcomer Kim Go-eun -- the muse of the title. [ed. Ben Umstead]


The Lady Miz Diva:  What made you want to make a film of this novel?

Jung Ji-woo:  As a person, I felt that I was getting older.  As I was reading the novel, it described really well about a man's feelings towards himself getting older, that's why I wanted to make a movie out of it.

LMD:  What was it like to take author Park Bum-shin's words and make a screenplay of them?

JJw:  In the novel, the two men's perspectives were very important at how they looked at the girl, but in the movie, I wanted to show the girl not only as a subject, but her inner perspective as well and how she matures throughout the movie.

JJw:  I never showed him the scenario.  He was very shocked when he saw the movie.  It's very different from the novel.  When he saw the movie for the first time, he didn't know what the movie was trying to say; he was in a shocked stage.  When he saw it for the second and third time, he felt the same way when a normal person watches for the first time.  The funny thing is that the character of Lee is more innocent than Park Bum-shin.  He is more conniving than the character. {Laughs}

LMD:  Park Hae-il is known for playing youthful roles.  What made you think he would make a convincing 70 year old man?

JJw:  First of all, people in Korea take the actor Park Hae-il as very friendly and they trust that actor.  The first reason was that the character, the 70-year old poet, had to gain some trust and support from the viewer.  That's why I decided to cast Hae-il.  I thought it was an opportunity for rather than two actors playing an older part and a younger part, for one person made up as an older man, you can see vividly how the person ages.

LMD:  I wonder if people would have been as sympathetic to the Lee character if your older man hadn't been as handsome? The makeup is very convincing, but you can still see that's a very attractive man.

JJw:  I have thought about that.  If an actual 70-year old actor was cast, I wanted to film the love scene between the older man and the girl.  To film it that way, would have been interesting.

LMD:  Of course the revelation of the film is Ms. Kim Go-eun's performance.  Can you tell us how much of that was her natural ability and how much was following the script and your direction?

JJw:  I think both ways.  I wanted to find an actress who had the inner emotions as Eungyo.  There is a lot of similarities between Kim and Eungyo, like an interest in the world.  I didn't want to mess with the emotions that she already possessed and I wanted to help her through and walk her through the movie.

LMD:  You've described Ms. Kim as having an unusual and free upbringing.  How did her personality affect your idea of the character of Eungyo?

JJw:  I think it helped a lot.  She grew up in China most of her youth, so she's not as totally Korean as a girl who grew up in Korea.

LMD:  Are you a director that enjoys using the interpretations of your actors, or do you have a set idea of what you want to see on screen?

JJw:  I prefer to let them bring in their own perspective.  I want them to be able to explore their own options and abilities, as well, as long as they don't miss the key point of a certain role or a certain part.

LMD:  Because the film is so intimate and depends so much on the three characters' close interactions, did you have a lot of readings or rehearsal?

LMD:  The sex in the film is pretty notable.  How did you approach it to make your actors feel secure?

JJw:  It's not that I requested, 'Oh, this will stimulate the viewers more,' or, 'This scene should be shot that way,' but after going through why these characters are acting this way and why these characters cannot stop what they are doing, after we accomplished that, everything went smoothly.

LMD:  Was there any issue with censorship?

LMD:  "Eungyo" is beautifully filmed.  Can you please talk about collaborating with cinematographer Kim Tae-kyung?  What was the visual idea you tried to convey?

LMD:  Did you ask your actors to read the original story, or did you prefer they kept only to your script?

JJw:  In this case, they read the novel first.  I never told them to.

LMD:  You've shown "Eungyo" in several countries.  Has there been any reaction that has surprised you?

LMD:  Was Nabokov's "Lolita" in your head as you were making the film?

JJw:  I've seen both the Lolita films and I felt there was some sort of black comedy aspect within those movies; but what I was more interested in rather than black comedy was a melodramatic scene and I wanted to tell the story of a man aging.

LMD:  I'm compelled by Lee's relationship with his assistant Seo Ji-woo, and vice versa.  I could see Seo's place as an apprentice/acolyte that perhaps fed Lee's ego and helped him around the house, but I'm not sure what Seo got out of it before they published the books?

JJw:  I think Seo Ji-woo received a lot of help to deal with his loneliness, and for Lee to bring Seo Jiwoo as his adoptive son; Lee got his help around the house and a lot of emotional help that way throughout the years.  I think it was one of the ways to reward Seo Ji-woo - writing the novels in his name - to reward him for all the help that he's gotten.

LMD:  What would you like the audience to take away from "Eungyo"?

Please tell us what is next for Jung Ji-woo?

JJw:  I'm working on something more societal and something a little more political, which will be out next year.  And the film after that I want to collaborate with other companies from other countries and film elsewhere.

This interview was cross-published at Diva's website The Diva Review.

Do you feel this content is inappropriate or infringes upon your rights? Click here to report it, or see our DMCA policy.
A MuseEungyoJung Ji-wooKim Go-eunKorean cinemaNYAFFPark Hae-il