Destroy All Monsters: Between SHARKNADO and PACIFIC RIM, All Monsters Have Been Destroyed 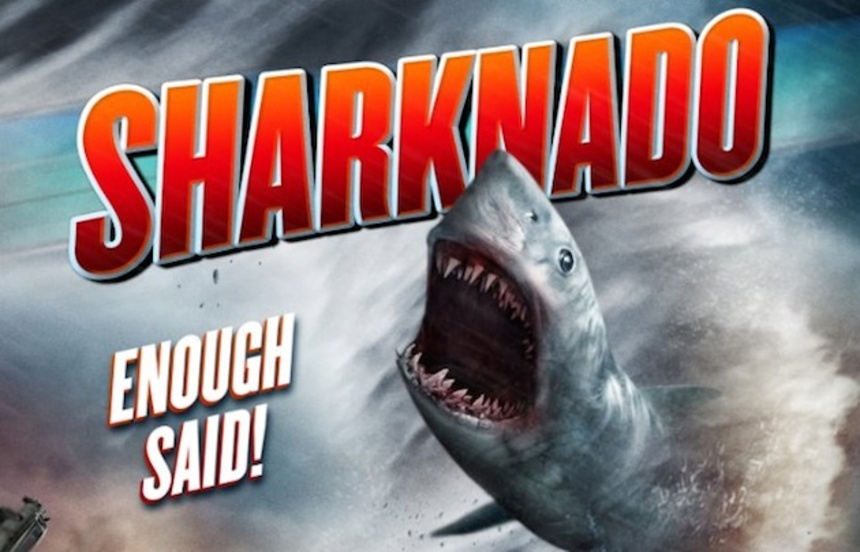 The marquee release out of Hollywood this past weekend -- at least in geek culture circles, though apparently not beyond -- was Guillermo del Toro's Godzilla update, Pacific Rim, which features giant mecha-bots beating up giant monsters from beneath the sea.

The most-talked-about pop cultural phenomenon of last week, meanwhile, was a televised exploitation flick called Sharknado, in which ... well, sharks and a tornado met chainsaws and Ian Ziering. Clearly, we have witnessed the metascendance of the B-movie, an astrological phenomenon so rare -- basically, one eclipse eclipsing another eclipse -- that the Mayans might have predicted it for last year.

Sharknado, designed from the ground up with the sort of cynical horse-sense about the American television marketplace that has run riot since the first season of Survivor, gets away with having been designed to be bad; the worse, in fact, the better, as evidenced by the proliferation of Tumblr gifs of Steve Sanders chainsawing his way into, and out of, a shark.

Pacific Rim, in the meantime, must suffer the ignominy of being expected to be good -- because Guillermo del Toro + Giant Robots + Giant Monsters, in fan alchemy, must mean good. Unfortunately for devotees of del Toro's ceaselessly perverse visual imagination, however, Pacific Rim is also required to be saleable. Studios do not, typically speaking, give away $200M for free, and with Pacific Rim now angling to do Hellboy numbers in the United States (Hellboy, mind you, was made at far less cost), the likelihood of del Toro swinging around to his In the Mountains of Madness adaptation, or for that matter Hellboy 3, seems further and further away, unless Pac Rim taps into its innate Asian flavour and does miraculous business overseas.

(The overseas number business is finally interesting. It's a chaotic game, but if Hollywood can master it, and the primacy of American tastes vanishes from blockbuster marketing, we may see some spellbindingly weird results.)

I like del Toro, and want to see him continuing to make Pacific Rim-sized spectacles, but I recognize that the base level cost of this style of moviemaking may finally have reached a threshold where such things simply can't be done. We complain a lot about the recent preponderance of franchises, remakes, and reboots, but the mathematical certainty of an identifiable brand for a movie in the $200M range is pretty much the only way to pay for the party any more.

The exception that proves the rule -- Avatar -- demonstrates more and more with each passing year just how gutsy and canny James Cameron's foregrounding of the 3-D experience proved to be. Cameron may have been wrong in his insistence upon 3-D's longevity as a value-add (rather, he was the first to punch the ticket, and thereby reaped the rewards), but with good old-fashioned hucksterism, he built an experiential scaffolding around Avatar's value proposition that allowed it to be more than just a $200M "original idea" with no identifiable or existing brand, precursor, or star. (Paging Sam Worthington: your career is calling. It wants to know where you are.)

Pacific Rim, in the meantime, is as good as Avatar and is built to exploit the same fan base of 12-year-old boys (the same marketing muscle, notably, that drove the most important blockbuster grosses in history, those of Star Wars). But Pacific Rim will never come close to Avatar's popular success, and not just because of its lack of a love story. (For those of us who groaned aloud when the best platonic, heterosexual relationship in SF history, Mulder and Scully's, became a romantic pairing, seeing Raleigh and Mako not bump uglies in Pacific Rim's third act was a blessed relief.)

For all the paroxysms of delight that Pacific Rim generated in the cultural gutters of the internet, the audience at large stayed away, because no one successfully convinced them that there was an idea there that was worth paying into.

The irony is that Pacific Rim -- compared to, for example, Sharknado -- is doing the very thing that built the blockbuster age in the first place: it's taking a B-movie concept and elevating it to A-movie production value while still keeping the B-movie's lunkheaded ludicrousness and likeability. This is the strategy that gave us Star Wars and Raiders, or turned beach paperbacks like Jaws and The Godfather into cinematic classics. There's a dirty little secret in popular moviemaking, which is that crap, properly detailed, makes really good movies.

But the strategy that built empires for George Lucas and Steven Spielberg, and ran the majority of Hollywood property in the 1980s and 1990s, no longer works in the post-Lord of the Rings world. (Spielberg and Lucas, to whit, are now talking about their cinematic visions being better suited to the new, lower-risk, VOD age.) We're a B-movie culture that no longer trusts premise alone, and B-movies are entirely based on premise, as Sharknado demonstrated.

When B-movies were the second feature following the main show, and cost you anywhere from fifty cents to a couple of dollars, we might have been more willing to find out what happened to The Thing That Replaced Dr. Frankenstein's Brain, or whatever else the hoary premises had in store for us. But when giant robots fight giant monsters in the seas of the Asian Pacific at an admission price of $20 per person (plus 3-D glasses), the popular "sure, why not?" factor around a property like Pacific Rim is understandably muted.

Sharknado, on the other hand, cost the viewer nothing, or at least the imaginary "nothing" that people ascribe to the cost of their television services. Its "sure, why not?" factor was enormous; nobody paid to see it, and nobody approached it as anything other than an insane idea to kick around on Twitter for an hour or two. Its poster tag line is terrifyingly clever: "Enough said!" Very true. After you concoct a word like "Sharknado," what remains to be communicated?

Sharknado wasn't the most expensive Asylum production, nor the least; it also wasn't the most successful SyFy original movie, nor the least. (Thanks to the social media shitstorm that happened on Thursday night, we can expect repeat showings of Sharknado -- along with their ad buys -- to be more lucrative.) In a way, the fact that Sharknado cost a million five is disgraceful; hand that kind of budget over to a couple of 16-year-old kids and they could have made the exact same movie, while still having $1.49 million left over to buy everyone who watched it a quarter pounder. SyFy got ripped off, but no one's complaining, least of all Ian Ziering. At the bottom of the budget spectrum, the lowest common denominator can't get low enough.

At the budget spectrum's top end, meanwhile, the end of days has come. Two summers from now, we'll see the conclusion of an arc for the modern blockbuster, which began with the Movie Brats' workmanlike fixer-uppings of B-movie ideas into the new franchises of the 70s and 80s, and ends in a summer constructed entirely of sequels, with no "original" properties of any kind. (Start counting: Avengers 2, Terminator 5, Pirates 5, Finding Nemo 2, Independence Day 2, Jurassic Park 4, and in a true completion of a 40-year arc for the modern blockbuster, Star Wars 7.)

Both sides of this arc are built on people reusing content and ideas from somewhere else, but what's changed is the source of the value proposition as presented to the audience, from the idea to the brand. Why do trailers give everything away nowadays? Because their purpose is no longer to lure you into a story of what Tony Stark might get up to this time around; the trailers exist only to assure you, repeatedly, that Tony will get up to something. It's as though Hollywood doesn't trust people to intuit that Sharknado is awesome or stupid all on their own any more.