Destroy All Monsters: Kneel Before VOD 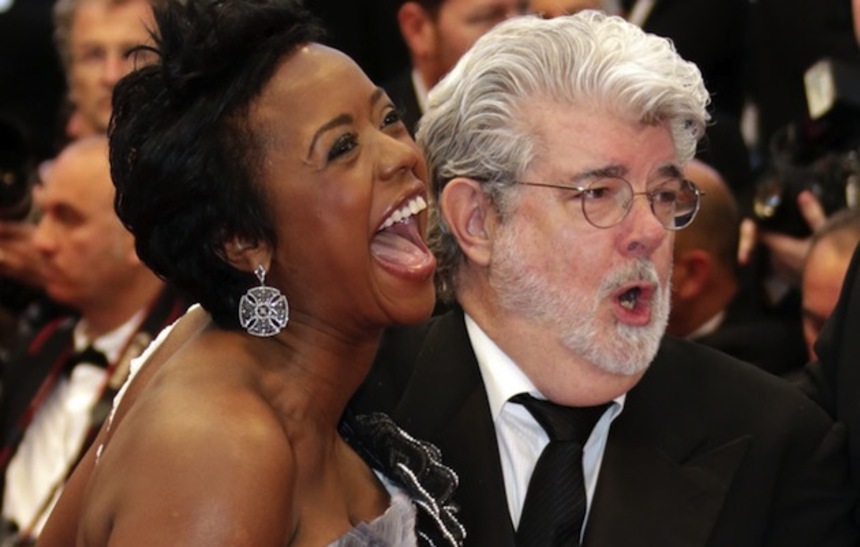 About two weeks have passed since George Lucas and Steven Spielberg announced their considered opinion that the Hollywood film industry as we know it is about to implode. We've been arguing the same thing on my podcast for years, so it was nice to see the whiz kids catch up. No one lost their job or melted down as a result of anything Lucas and Spielberg said, because George and Stevie are, after all, a couple of old dudes waxing philosophical about a film industry they are no longer in charge of. But it was fun to consider their dystopic (?) vision, regardless.

(A brief outline of the argument, the longer version of which can be found here:

OK, the programmable dreams thing is nonsense, or at least I have to believe it is, given how completely Strange Days wigged me out in '95. But I grew up believing that the PADDs from Star Trek would arrive in the 24th century, so what do I know.

There's something nice about the idea of Lucas, purported to have railed against the notion of becoming a corporate fat cat, finally slipping his self-imposed shackles, selling his company to Disney (to Disney!), and vanishing into the hills with his new bride -- who he married on the weekend -- as the film industry itself collapses around him. There's a gleeful spirit of unaccountability to everything the two 800-pound gorillas are saying, in that they don't have to be around to deal with the consequences, right or wrong.

They are, of course, right.

Over in South Korea, Disney and Sony are testing a day-and-date VOD system for new releases that gives consumers the choice between going to the theatres to see Brave or just sitting at home and watching it with the kids. (Canny move, in the case of family movies especially -- because if you think your two-year-old is in any way precious about the experience of Mom and Dad taking the whole gang to the multiplex at a total cost of $100+, you're fooling yourself.)

Back here in North America, shortly after Lincoln scarcely escaped a straight-to-HBO fate (as reported by Spielberg), one of the most significant American directors of the past 20 years delivered his filmmaking valedictory by way of a straight-to-HBO, never-in-theatres feature film: Steven Soderbergh's Behind the Candelabra.

Soderbergh, like Spielberg, is an interesting case, in that he is essentially quitting the film industry out of a confessed frustration with the narrative limitations of the art form, mere (proverbial) seconds before that art form might be liberally unchained from its current concept of narrative, by dint of its new delivery mechanism. (Or to put it another way, I want to see more films by the director of Che Part Two and Ocean's Twelve in this new, weird landscape, not less.)

Whatever else one thinks of Arrested Development's recently-arrived fourth season, its relationship between the delivery mechanism (Netflix) and the content (narratively independent, yet narratively overlapped, episodes) is a bellwether for larger, more fascinating experiments to come. Netflix dumping an entire season's worth of television episodes onto their servers at once seems like a strategic failure for a show like House of Cards, in that it deprives the saga of every other television show's ability to build momentum, buzz, and therefore audience, over time. (Similarly, dumping theatrical motion pictures to VOD day-and-date will deprive those movies of the massive shitstorm of publicity that box office number reporting actually generates, for no reason anyone can explain to me.)

But if one liberates cinematic storytelling from the functionally serial requirements of weekly television -- imagine Lost's time-traveling, narratively-ingenious fifth season, if you didn't have to watch it in a straight line -- by dumping all of the content onto a server in a single day, sooner or later a clever filmmaker, television producer, or other storyteller is going to come up with a way to use form to express content in a new, defining way. It didn't happen with Arrested, although it's a good first kick at the can; it probably won't happen in a significant case for half a decade or so. But that green space is out there to be conquered, and if America proved anything in the 20th century, it's that sooner or later, every bit of green space gets conquered.

Ironically, a Choose Your Own Adventure movie was announced right in the middle of all of this. Let us hope -- strenuously -- that CYOA is not the new model for narrative storytelling in the VOD world; although arguably, it could be. Sooner or later, to build on Lucas and Spielberg's comments, all of this digital media is going to bleed together like paint: if your "TV," and your "movies," and your "video games" are all beaming at you through the same big black box (quotes added to imply that even these media definitions are going to undergo massive revision over the course of the next 10 years), how long will it be before TV is a movie is a video game?

An argument will break out about whether or not this is a "good thing," which I'll preempt only by saying: I don't care. Cinephiles of various stripes will be aghast at the notion of their beloved art form transforming into something else, and it will be entertaining to watch them enter support groups with fans of opera and the ballet. Regardless of our subjective feelings on what may or may not happen, however, one thing is certain: a living art form grows, and growth means change.