Review: THIS IS THE END, Celebrity Friends Laughing At Themselves And The Apocalypse 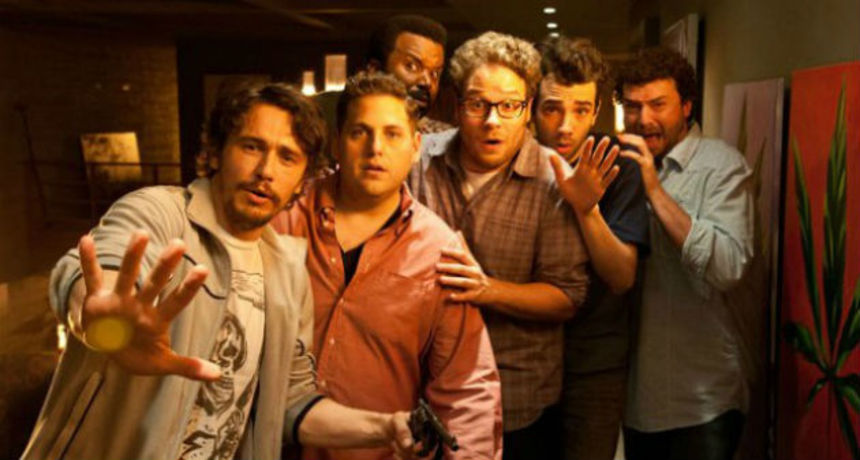 If you can't trust your best friend(s) when the world ends, who can you trust?

Making their directorial debut, Evan Goldberg and Seth Rogen have built a vehicle that is customized to fit the talents of their friends. Loosely constructed, yet jam-packed with a plethora of profane jokes and an overdose of obscenities, This is the End will likely appeal to anyone with a rooting interest in characters whose behavior can most generously be described as "boorish and bawdy but occasionally considerate of others," and who are the most likely to appreciate the overriding joke, which is that the actors play "themselves," adding another post-ironic layer to the proceedings, and allowing them license to ridicule one other's public persona. (Or, at least, their "public persona" as perceived and laid out by Goldberg, Rogen, and the actors.)

The meta is so thick that it's about impossible to know where fake-reality leaves off and fake-fakeness takes over. The only thing that's certain is that reality-reality is nowhere to be found, either in the documentary or narrative sense.

The story begins with Jay Baruchel arriving in Los Angeles to visit his best friend Seth Rogen for the first time in months. Jay's understanding is that they'll spend the weekend 'reconnecting,' but Seth convinces Jay to go to a party at James Franco's new house. It turns out that the two friends have drifted apart; each thinks the other has changed, and neither is entirely certain that things will ever be the same between them.

The celebrity-filled party house is about the last place in Los Angeles to learn that the Apocalypse has begun; while on an alcohol run, Jay witnesses the Rapture at a convenience store -- shafts of light beam down from above, and bodies fly upwards -- and he and Seth both cower before the sheer madness and panic breaking out on an epic scale, complete with huge fires, looting, death, earthquakes, and general mayhem and destruction. After a significant uptick in celebrity body count, Jay and Seth seek refuge in Franco's house, along with Jonah Hill, Craig Robinson, and, eventually, Danny McBride.

There, they cope the best they can, bantering with and baiting each other, jostling to establish their own personal space, and working hard to ignore what's happening to the rest of mankind just outside the front door. The raunchy humor is typical of what this bunch have done in the past; for me, their stream of filthy jokes, peppered with profanities, is very hit-and-miss, with a great percentage of the jokes falling flat.

If you're more in tune with that brand of humor, your enjoyment of the film may rise exponentially. As the story moves into its third act, more dire circumstances -- and the possibility of avoiding them by performing (shudder!) unselfish acts -- are discussed at length, suggesting that the boys want to introduce a vein of 'seriousness' into the proceedings, but that falls about as flat as many of the jokes, mainly due to the chord of insincerity that ripples just below the surface.

Life, death, the end of the Earth ... it's all a joke, right? Especially if you're a celebrity. Might as well laugh with your pals in the face of everlasting destruction.

This is the End opens wide in theatres across North America on Wednesday June 12.

Do you feel this content is inappropriate or infringes upon your rights? Click here to report it, or see our DMCA policy.
Danny McBrideEvan GoldbergJames FrancoJay BaruchelJonah HillSeth Rogen

More about This is the End