Now on Blu-ray: WARM BODIES Is A Clever Teenage Romance For The Horror Crowd 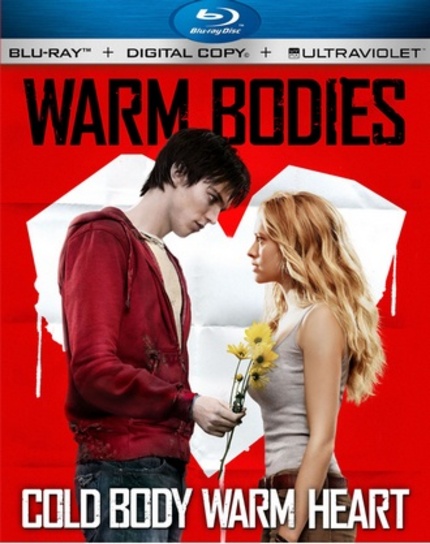 A teenage romance with monsters? Hasn't Twilight already done this and proven, unequivocally, that it's a terrible, terrible idea? Well, yes and no. Warm Bodies swaps the vampires and werewolves for zombies, and the ridiculous melodrama for genuine warmth and humor. The result is a film that I ended up enjoying a lot more than I'd expected. I wish that more kids gravitated toward this kind of film instead of the other, it would save the world a lot of pain.

Our Jason Gorber reviewed the film upon its cinema release earlier this year and had these comments, which I agree with completely:

The whole thing feels of a different, simpler time when romances didn't need to be either overtly cynical or draped in gross-out moments. Essentially, this is a John Hughes-style story with skeletal bad guys, complete with a college radio friendly soundtrack and wide-eyed performances from the attractive yet flawed lead characters.

Director Jonathan Levine continues to surprise. I seriously despised All the Boys Love Mandy Lane when I saw it at TIFF's Midnight Madness screening in 2006, but following that up with the likes of 50/50 and this film makes me find comfort in young directors refusing to fall into pigeonholes with their careers.

Accessible for a young teen audience, yet charming enough not to make an adult viewer want to rip their face off, Warm Bodies does a great job at underplaying its high concept plot, focusing instead on developing empathy for the characters. Thanks to strong performances and assured direction, it's a film that convincingly earns its moments on screen, twisting both classic tales of romance and the usual mechanisms of rampaging zombie flicks.

I haven't yet seen All the Boys Love Mandy Lane, but 50/50 really hit me hard, and I didn't realize that this was the same director until after I'd seen it. The films share a similar sense of humor and lightness, but without being simply transposed versions of one another, which is very welcome. I am definitely looking forward to whatever Jonathan Levine has to say next.

Forbidden love is a love established peril of young love, but in this case the stakes are a bit higher and the love evolves more naturally than it does in any number of Romeo & Juliet stories throughout the years. The film get its tone spot on, it has a very specific look and feel, and creates a world that feels established without an overabundance of exposition, in other words, the minute we finish the opening credits, we're ready for story, just the way I like it.

For anyone out there fearing that this is simply a Twilight retread with zombies, you can breathe a sigh of relief. However, if you're one of those hardcore guys who can't stand your monsters being humanized, you might want to steer clear. Warm Bodies plays a bit fast and loose with the zombie mythos, but in a way that works for its world and its characters, so I gave it a pass because it entertained me and gave me a warm feeling in my stomach. Definitely recommended.

Warm Bodies has a very distinct, very pallid color scheme that is represented very well on this Blu-ray. The image, obviously originating from digital, looks sharp and crisp and the colors are very strong. The audio is similarly good, with the infrequent scenes of action being less impressive than the immersiveness of the soundtrack. Studios are getting much better with contemporary releases on Blu-ray and Warm Bodies is an extension of that streak. The disc also features a lot of bonus material that is too dense to examine in depth here. Just let it be known that if there's something you want to know about Warm Bodies, it's probably covered in one of the many featurettes, commentary, interviews, gag reels, etc.