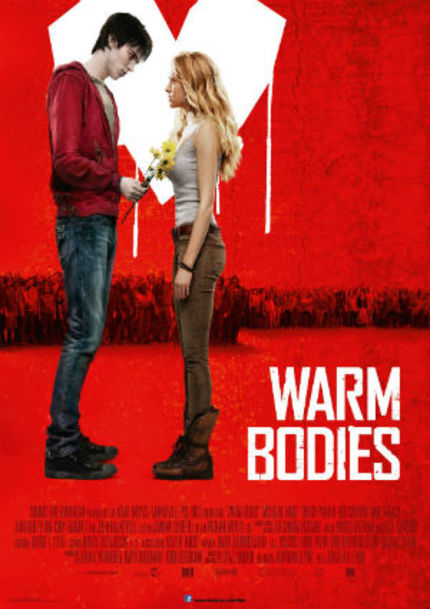 A sweet yet innocuous romance steeped in both Shakespearean motifs and shoegazing tropes, the saving grace of Warm Bodies (AKA 'the emo zombie film') is that it's quite charming, never completely falling into a farcical take on the subject matter.

We meet "R" (Nicholas Hoult) shuffling through an airport, intoning via a melancholy, sardonic voiceover about his days spent in utter banality, suffering from the condition of being undead. It's a highly literary device -- no surprise, since the movie is adapted from a novel by Isaac Marion -- and, done badly, it would have set the film adrift. Hoult's reading, however, immediately hooks the audience.

After an outing in search of brains to munch upon, he stumbles on Julie (Teresa Palmer), who he falls for in part because the ingestion of her boyfriend's cranium has instilled memories of being in love with her. This is one of many cute takes on the whole zombie thing that actually manage to work, despite what seems at first to be a pretty silly conceit.

Without ruining too many of the surprises, this star-crossed lover thing actually plays out in a quite infectious way. John Malkovich plays Julie's dad with even more bombast than usual, his role being a hardcase General tasked with keeping his small band of unaffected humans alive. The always enjoyable Rob Corddry plays a grunting friend to "R" who gets caught up in the shenanigans.

The metaphor is clubbed over the head pretty much from the start, but there are some sweet moments, including a retreat to a post-Apocalyptic hipster nest inside a jumbo jet in order to listen to vinyl and chill out.

The whole thing feels of a different, simpler time when romances didn't need to be either overtly cynical or draped in gross-out moments. Essentially, this is a John Hughes-style story with skeletal bad guys, complete with a college radio friendly soundtrack and wide-eyed performances from the attractive yet flawed lead characters.

Sure, the CGI is bargain basement, but the clearly low-ish budget film does a lot with what it has to work with. Montreal is transformed into a perfectly serviceable decrepit city, and even the old Olympic Stadium, where the Expos baseball team once roamed, makes for a fittingly epic location to spend time in once the world has gone to hell.

Director Jonathan Levine continues to surprise. I seriously despised All the Boys Love Mandy Lane when I saw it at TIFF's Midnight Madness screening in 2006, but following that up with the likes of 50/50 and this film makes me find comfort in young directors refusing to fall into pigeonholes with their careers.

Accessible for a young teen audience, yet charming enough not to make an adult viewer want to rip their face off, Warm Bodies does a great job at underplaying its high concept plot, focusing instead on developing empathy for the characters. Thanks to strong performances and assured direction, it's a film that convincingly earns its moments on screen, twisting both classic tales of romance and the usual mechanisms of rampaging zombie flicks.