Tribeca 2013 Review: THE TRIALS OF MUHAMMAD ALI Lacks Novelty And The Figurative Punch, But Provides Plenty of The Literal Kind 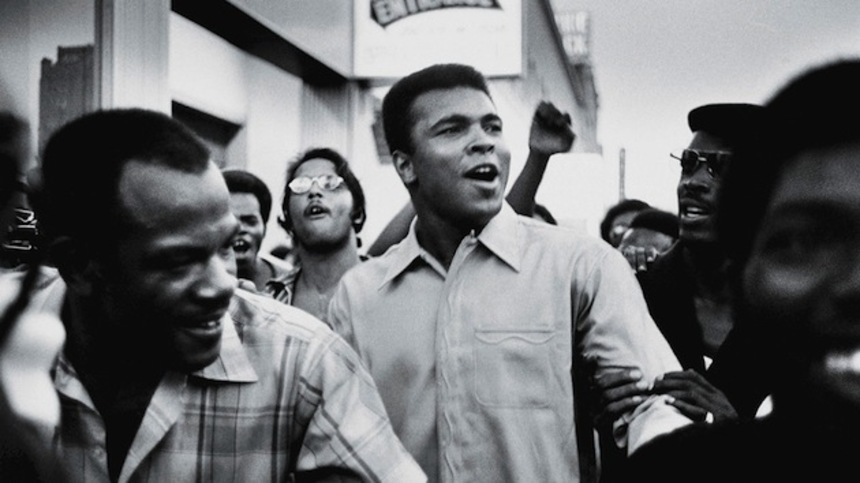 Muhammad Ali, aka Cassius Clay, is one of the most famous boxers in history, and one of
the more recognizable names in all of sports. His legendary strength, speed, power, and his incredible brashness and pride set him apart from his peers. He has long since been immortalized in the American (and global) lexicon, but that didn't stop Hollywood from latching onto his story (Michael Mann's Ali hit in 2001).

Bill Siegel's The Trials of Muhammad Ali examines a significant, though often uninspected portion of the boxer's career, or lack thereof. As the civil rights movement of the 1960s swelled, the man who was born as Cassius Clay became more and more outspoken and vitriolic in his criticisms of an America torn apart by racial oppression. After joining the highly controversial Nation of Islam, Clay was given the name Muhammad Ali. Piggybacking on his already controversial behavior, Ali, after being drafted for service in Vietnam, refused to go on the grounds of religious objection. He was subsequently banned from boxing and it even seemed likely that he would face jail time. Eventually, Ali returned to the ring, but his career, in terms of athletic achievement, never fully recovered.

The Trials of Muhammad Ali takes a look at Ali's involvement with the Nation of Islam, his refusal to compromise his personal beliefs, and the associated fallout. As a document of Ali's history as a boxer, and his emergence as a voice of the counterculture, the film is a worthy effort. Though knowledge of Ali's political beliefs and activities is generally possessed by even casual students of sports and/or history, a deeper understanding of who Ali was in the context of his times is often overshadowed by the larger than life character he presented himself as to the press and the American public at large. There are large chunks of the film, such as Ali's falling out with Malcolm X, which further illuminate certain aspects of the man's character.

However, The Trials of Muhammad Ali runs long and it runs repetitive. Moreover, Siegel seems dead-set on making Ali come out smelling like roses, and there are a few skipped over segments--most notably the assassination of Malcolm X by members of the Nation of Islam and the alleged conspiracy involving Nation founder Elijah Muhammad--that are liable to raise eyebrows. All potential bias aside, the documentary seems to run out of steam midway through the proceedings but then chugs along, dependent on repetitive, but undeniably entertaining clips of Ali to keep the audience's interest. The film begins with some promising background and begins to tap into the origin of one of sports' most fascinating personalities, but any novelty is soon abandoned for a highlights reel approach, as Siegel relies on pandering to the audience's deep-seated feelings about the historical figure in order to run out the clock.

The Trials of Muhammad Ali certainly isn't a bad documentary, but it brings very little to the table that we don't already know. Those filmgoers who are already fairly well-versed in this period from the world of boxing may do well to look elsewhere for a fresh and engaging look at one of the most fiery men in all of sports.

Do you feel this content is inappropriate or infringes upon your rights? Click here to report it, or see our DMCA policy.
BoxinDocumentariesThe Trials Of Muhammad AliTribeca 2013