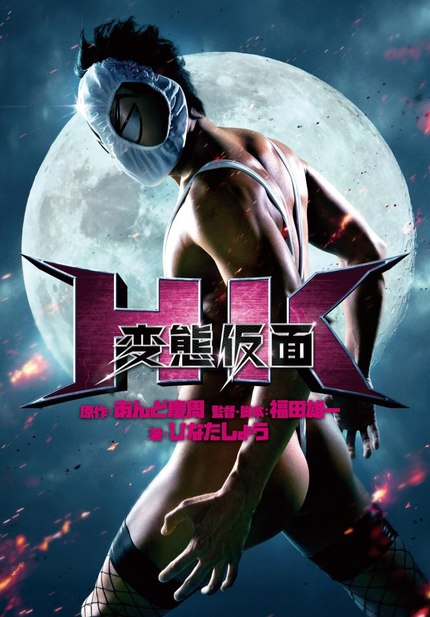 Book and film tell the story of a high school student, Kyousuke, a sweet natured doofus with the heroic heart of his deceased detective father but without the brawn to stand up the local bad-guys and bullies. When the object of Kyousuke's affection, Aiko, is taken hostage in a bank robbery, it's up to the smitten student to rescue her. In attempting to disguise himself as one of the masked criminals the boy accidentally picks up a pair of girl's panties, pulls them over this head and - too late to realize his mistake - breaths deep of the panty odour. A transformation occurs and he becomes the super-powered, and utterly perverted super-hero, Hentai Kamen (Pervert Mask). Exploding onto the screen wearing nothing but a pair of very skimpy white speedos he proceeds to beat the crooks with an assortment of extreme sexual poses and martial arts / wrestling moves that always leave the villains with a face full of crotch.

Suzuki Ryohei, soon to be seen in the upcoming Gatchaman (aka Battle of the Planets) movie plays the hero with a combination of charm and innocence as he struggles to accept his perverted alter-ego. His performance really centres the film and gives it a little heart, creating a tender balance between the love-struck high school kid and the over-the-top super hero.

Director Fukuda Yuichi has another film out at the moment with Kodomo Keisatsu (Kids Police), and it seems he can handle the comedy / action mix competently, with a tighter script and slightly less ridiculous subject matter it would be interesting to see what he could come out with. I'm not sure I would go as far as saying this is a satire, but the film certainly seems aware of certain panty-obsessed aspects of manga and anime culture and has taken it to hilarious extremes. HK: Hentai Kamen has it's flaws but it's a big, colourful, bizarre comedy that is a lot of fun and has enough effective visual jokes to make it well worth a watch, if only for its novelty value.