Review: SOMETHING IN THE AIR Inspires Youthful Passion And Energy 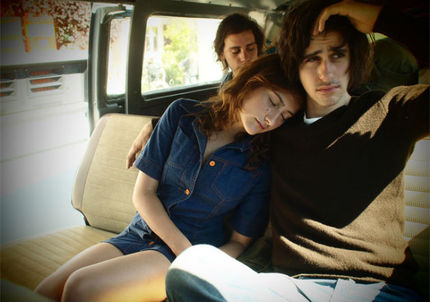 At the outset, Olivier Assayas's Something in the Air is a biographical nostalgia piece about growing up in the aftermath of the May '68 events in France. But what it really is, is a social experiment in which 18-19 year olds, most of them first-time actors, reenact the youth of perhaps the most volatile time in contemporaneous French society, when the revolution seemed palpable.

As it was revealed in my interview with Mia Hansen-Løve (director of Goodbye First Love and the current wife of Assayas), Assayas has a real knack for connecting with and getting great performances out of young actors. (Hansen-Løve herself was in Assayas's Late August, Early September when she was 17 and swears that the experience changed her life.)

The French title (Après mai) refers to the student uprising and General Strike of May 1968. Something in the Air starts with a group of high school students' violent confrontation with baton wielding, teargas shooting cops on motorcycles. The scene is too energetic and immediate to be nostalgic. Set in 1971, this semi-autobiographical ensemble piece about a group of friends in tumultuous times, when everything seemed possible, is at once personal and sprawling.

After vandalizing their school with revolutionary banners and graffiti, they end up injuring one of the security guards and are told to lay low during the summer. Puppy eyed, mild mannered aspiring painter Gilles (newcomer Clément Métayer), who just broke up with his ethereal poetess girlfriend (Carole Combes), hitches a ride with the Leftist filmmakers, along with a devout of the cause, Christine (Lola Créton of Bluebeard and Goodbye First Love) and artistically inclined Alain (Félix Armand) to Italy.

I don't pretend to be an expert in French history; I only have vague memories of that time period of France from textbooks and films. Assayas got all the political jargon and lingo down, as everyone was into politics at the time. If you think today's left is fractured and sectarian, France in the 70s would make your head spin: there was the French Communist Party, CGT (French Trade Union Federation), Trotskyites, Leninists, Le Secour Rouge, the Maoists, VLR (Vive la revolution), FLJ (Front de Liberation des Jeunes), and the list goes on. 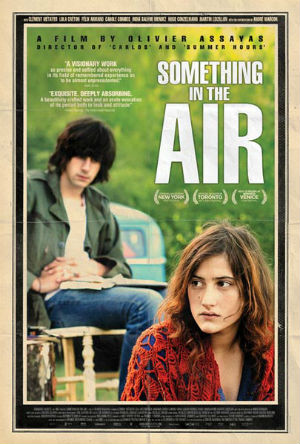 Our Gilles is in the thick of all these political activities, but, at the same time, independent minded. He reads a newly-published book criticizing (first of its kind) Chairman Mao's Cultural Revolution, despite the disapproval of many upper classmen. He also finds his own voice through art -- first painting then filmmaking -- while maintaining his counter culture attitude and general skepticism of the world. Assayas's energetic camera also turns to many of the sunny Tuscany locations, as many of his young protagonists pour out their youthful enthusiasm in art, love and politics. There is no voice over or flash forward. Assayas, born in 1955, who was of age back then, never once steps in to remind us that this is all in the past. No, this is not a nostalgia piece.

The film's hopefulness and youthful energy is quite infectious. In addition to the aforementioned great young actors (Metáyer, Combes, Créton and Armand), newcomers India Manuez and Hugo Conzelmann shine as Leslie, a free spirited American girl, and as Jean-Pierre, a dignified, honorable fellow student activist. One can't help but compare youth in the film with today's largely disaffected, docile young people. What happened to that passion, awareness and dedication?

This is where Assayas's genius kicks in. He uses actual teenagers of today to play the part of youth of his generation! It's a social experiment on a smaller scale. None of the characters seem out of their element. His even-handed attention to each character brings out a well-balanced, strong ensemble piece that is both relatable and affectionate without ever being coy or stereotypical. The more I think about the film, the more I like it. It is one of the best films I've seen at this year's New York Film Festival.

Review originally published during the New York Film Festival in October 2012. Something in the Air opens in limited release in the U.S. on Friday, May 3. Visit the official site for more information.

Dustin Chang is a freelance writer. His musings and opinions on the world can be found at www.dustinchang.com.

More about Something in the Air