Review: COMMUNITY S4E13, ADVANCED INTRODUCTION TO FINALITY (Or, Is It?) 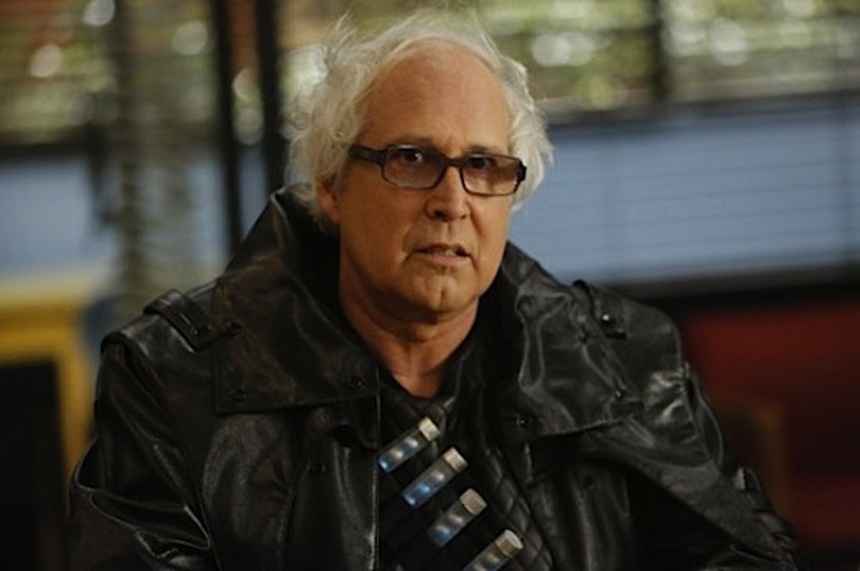 It was in the season 3 episode Documentary Filmmaking: Redux that we saw a hilariously outdated video promoting Greendale Community College. In this video we saw a hopelessly hokey basketball player say "Why Go Greendale? Just because!" That episode, written by Megan Ganz who also penned last night's episode, was one of the wackiest and eccentric the show had put on to date with the Dean pulling a Francis Ford Coppola/Colonial Kurtz level tyrant-style meltdown when he wrangled the entire school into making a new promo video -- and this was in a season full of high-concept, hair brained risks. In looking back on that episode, I feel it worked because it embodied the kind of weirdly bold and passionate "why not?" attitude that a school like Greendale can instill in the misfits, outcasts and dispossessed folk that end up at its doorstep. These are folk that are in need of a place to call their own, a place to find a family. Whether it was with creator Dan Harmon leading his writers room into the fray, or Moses Port and David Guarascio picking up the pieces this season after the Harmon Empire fell, Community has always been about cultivating just that: Community. For our study group who went from Spanish to Anthropology to Biology and then History, Greendale was the place that inspired them and gave them each other. It's a simple thing to acknowledge, and heck, I'm preaching to the choir here, but to hold this dear right now in this moment feels rather important.

To even consider Community without Greendale is a little weird, but we've been preparing for the possibility of a Community with less Greendale for quite some time now. My overall feelings on Advanced Introduction To Finality won't quite settle until Monday when NBC will announce their fall lineup and we will have a clear picture, or clearer picture on the fate of the show. I want to try and let go for the moment the somewhat sad possibility that this episode is not just the season finale but in fact the series finale. I just want to consider the episode on its own terms. Which is, of course, easier said than done.

It's fitting that we have an old hand of the show like Ganz close us out. She's been a fan favorite for sometime and a reasonable and honest voice during a season of many transitions, not all of them pretty. Her task at getting Advanced Intro into shape is a lofty one as there's a lot of plot to handle. She does what she can with a scenario that is nowhere near perfect, but really your overall enjoyment of this episode is gonna depend on your affinity for paintball and the Darkest Timeline.

Though it isn't stated till the action-heavy climax when Abed has gathered his friends in a paintball battle against the Evil Study Group, it is quite obvious from early on that this episode is some kind of "what-if" scenario. With Evil Jeff teleporting in Terminator-style, it's just all to fantastical not to be, right? I mean even in a season full of questionable directions, Community wouldn't go off the rails this much would it? It is a dream perhaps, most certainly a dilemma. It turns out that the Darkest Timeline invasion plot is an visualization of Jeff's own inner turmoil about graduating from Greendale. About leaving Greendale.

Despite being so up in arms about how last week's episode wrapped up the study group's origins all nice and pretty, Lost-style, I barely scoffed at Advanced Intro's main conceit that "it was in his head". This certainly isn't anywhere near a great episode, and if it is in fact the series finale than it only does a ho-hum job of wrapping it all up, but better they do some weirdly inverted Community-fans-only farewell with The Matrix and Star Wars references alike than anything more... broad and... quaint? And for that matter we got a perfectly fine goodbye last season when cancellation loomed even more so than it did this year. If that's the case then one could say that anything good here is just an added bonus.

What didn't work for me was the overly cartoonish Evil Jeff. Yes, yes, he was merely a dream character, but for this to be some dark shade of the really terribly cruel Jeff we so loathed to love in season one, well, that cartoon sneer and gravely voice didn't go in the right direction for me. You know what it's even odd to think about how we would have never even seen a scenario like this in season one, it was such a different show back then. Heh. I'm realizing this right now as I type, and not a second before... Community has pretty much been four different shows (with many even smaller variations) over the course of four years. If you will... four different timelines converging on an emotional constant. Now I'm not saying this literally of course, but it is an interesting abstract to consider and would fit right into the show's mindset. After all, TV storytelling is mutable that way. It's a journey. If Lost taught us anything, it's not about the destination (or the answers), it's about that journey.

So did I laugh during Advanced Intro? I chuckled. I was amused. I was pleased to see these characters gather together at the end and celebrate their time at Greendale. Jeff graduated, and in a fitting send-off to Chevy Chase, so did Pierce. Everyone else, for various reasons explained (Troy still has a year left at air conditioning repair school. Was it common knowledge that he was still there before last night?) and unexplained, will continue on at Greendale next semester. The Dean wore a wedding dress and Chang mellowed right into his second chance.

What's interesting to speculate about -- until Monday at least -- is just what Jeff is going to do after Greendale. Sure, he realized that he wanted to keep Greendale close, stating that he'd get a job at a small firm in town just so he could visit, but did anybody else think that the joke about him ending up with a major in education meant that he could come back to Greendale at some future point (whether that's next season or later) and teach? In a way that only Community could do that would make the show come oddly full circle (inverted full circle?), either giving the show another warm and fuzzy ending, or extending its life perhaps  dangerously so into say Scrubs season nine territory.

A further word on this season: For hardcore fans and more laid back viewers alike, this has been no doubt, the overall weakest season of the show. I am certainly not as in love with the show as I was say mid-season 2, but the affinity I hold for it remains solid. Considering everything, they crammed a lot of material into 13 episodes and some of it worked well, while some of it crashed and burned. There were only a few episodes I really disliked: The Documentary episode, the Puppet episode, and especially the Origins episode. While I most certainly had major concerns and problems with the first four eps they all still managed to feature an interesting moment or standout gag. Herstory Of Dance was perhaps my absolute favorite episode this season what with Abed's triple-date storyline (Brie Larson better come back if we're getting season five!), Britta's triumph, Jeff's struggle (which I felt was fitting and realistic considering his post-dad issues) and Pierce's secret save. Jim Rash as Dean Pelton was most certainly this season's most consistent performer and character... that is if you can stand his cross dressing gags and overly pansexual comments. It's obvious that I myself lap it up quite gratefully.

So, yes, how to end talking about what could be the end of Community? Like Jeff during the episode, I'm at a lot loss for words. I feel I've said everything I've needed to say somewhere in this whole thing, except for this... for any community of readers I've cultivated over the last thirteen weeks of writing these reviews: thanks for reading and... see ya again next year?

- The main issue I have with the overall quality of Advanced Intro is that it has to pack a lot into a mere 21 minutes. Had they been given an extended finale like some other NBC shows, I think this one could have been a lot stronger. As it was Shirley and Troy were largely sidelined and Pierce's final moment could have used another... uh... moment.

- So if season 5 happens, we'll have no Pierce. I'm like a broken record, we all know this. If this season proved anything though it showed us that Chevy Chase did not always need to be around for the group dynamic to work, which means I'll be fine with his absence. We have such a solid stable of secondary characters that Greendale, the college and the town, could grow in interesting and exciting ways.

- I actually smirked at Abed's remark about them finally finding a way to make paintball cool again.