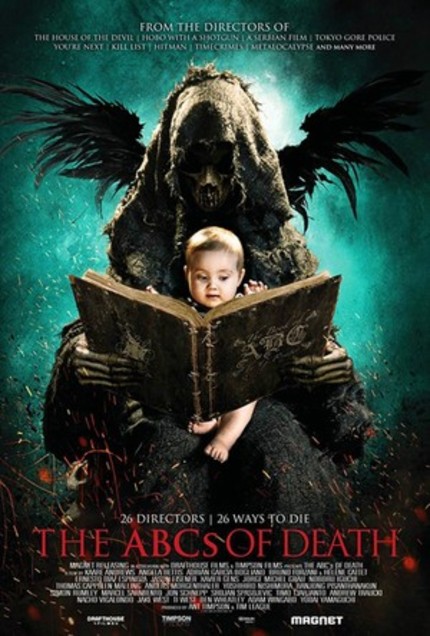 Are you ready for a second lesson in mortality? Because word is out today that horror anthology The ABCs Of Death is getting a sequel and the initial lineup includes some big names from all around the world with a good number remaining to be announced in the future. Who's in there? Read the full announcement below!

Cannes - May 15, 2013 - Producers Ant Timpson, Tim League, and the Wagner/Cuban Company's Magnet Releasing announced today the production of ABCs OF DEATH 2, a high energy sequel to the 2012 anthology hit that delivers 26 new dark tales from the industry's most celebrated genre directors. Taking all that was great from the first installment, ABCs OF DEATH 2 aims to be a wilder, leaner, faster paced and even more entertaining anthology this time around, with a new crop of award-winning, visionary filmmakers from around the globe.
In a significant departure from the first installment, ABCs OF DEATH 2 is expanding beyond horror directors. The sequel's new roster includes Goya Award winner Álex de la Iglesia (THE LAST CIRCUS, DAY OF THE BEAST); ROOM 237 mastermind Rodney Ascher; Academy Award-nominated animator Bill Plympton; Filipino icon - and Director's Fortnight inductee - Erik Matti (ON THE JOB, MAGIC TEMPLE); and the founder of Nigerian "Nollywood" cinema Lancelot Imasuen.

Additional filmmaker announcements, as well as the return of the series' popular 26th Director competition (which allows one exceptional fan-made entry to become part of the finished film), will occur throughout the Summer of 2013.

"The ABCs OF DEATH was a wildly ambitious anthology that connected with genre fans in a big way, and we're all very excited about the potential for the sequel," said Magnolia President Eamonn Bowles. "With talented producers Ant and Tim and the incredible roster of directors assembled, we're confident that ABCs of DEATH 2 will be even better than the first."

"This time around we're all determined to expand the concept to even more hyperkinetic, comically deranged and mortally dizzying heights of how someone can shuffle off this mortal coil," said Producer Ant Timpson.

Magnet is planning a 2014 release of the film. ABCs OF DEATH 2 is produced by Ant Timpson and Tim League, in conjunction with associate producers Todd Brown, Marc Walkow, Mitch Davis, and Ted Geoghegan.

Do you feel this content is inappropriate or infringes upon your rights? Click here to report it, or see our DMCA policy.
abcs of deathalex de la iglesiaanthologyhorrorsion sonovincenzo natali