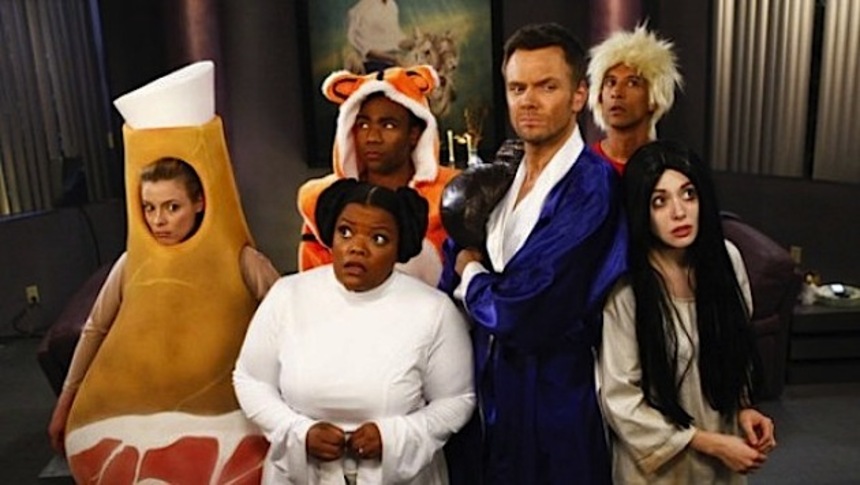 Word came late on Friday that network NBC and studio Sony had arrived at a deal for a fifth season of the ratings challenged, but beloved cult show Community. The fifth season will consist of at least 13 episodes that will fall somewhere on the 2013-2014 NBC schedule. Community joins Parks And Recreation as the only comedies to get renewed by the network, something of a feat considering its low ratings. But when you're on a network that's in last place and still pulling in decent ad shares for key demographics (the season finale on Thursday tied with American Idol for the coveted 18-34, and going up against the biggest ratings juggernaut on television (That'd be The Big Bang Theory, in case you were wondering), it perhaps makes sense to hold onto a show that at least has a loyal audience when you're cancelling three out of every four shows like they're lame ducks. It costs somewhat less to keep a low rated if steady rated show than start up a new one and have that fail before mid-season, right?

Well, if you look a little closer at BTS rumblings you'll see that Sony pushed for a fifth season because Community is a mere 16 episodes away from 100, which has largely been touted as the sweet spot for syndication deals. Even if they only produce 13, that's still 97 episodes ready for basic cable dinnertime reruns, which means a windfall of cash for the studio. In fact, Comedy Central is already set to start airing the first four season starting next fall, which could means a rating spike for the fifth season.

The big question though for fans going into the fifth season is just what the show will be. Due to new showrunners the fourth season has largely been considered the most inconsistent of a show that has always been known for taking risks. If you followed my reviews for the season then you know I was very wary of many choices that were made. I have come out of this feeling less fond of the show, though I'm beginning to wonder if that's just because of time and age on my part and not on the show's. Now here's the bittersweet funny part: Depending on how you look at it, the show is that much closer to being a victim of its own joke "six seasons and a movie". Yes, I said victim. Also consider the theme song lyrics: "I can't count the reasons I should stay, one by one they all just fade away" Damn! this show really is as meta as it always wanted to make us believe it was.

At any rate, just like this past year, I'll be watching out of plain curiosity for what they do. It's quite possible with Jeff having graduated from Greendale Community College and Chevy Chase now out of the mix, the show will have ample room to flex its comedic muscles in different ways, distancing itself further from the Dan Harmon years, which I think is a far better move than being just a mere imitation of the Dan Harmon years. You know what, I'm gonna take this to heart for the summer and see where it gets me come the fall.

So... writers and producers, cast members and grips, camera department, PAs, editors and craft services of Community: Now is the time to prove there is still life in this show. Now. Is. The. Damn. Time.

Oh. God. Sometimes I wish I didn't have a heart.