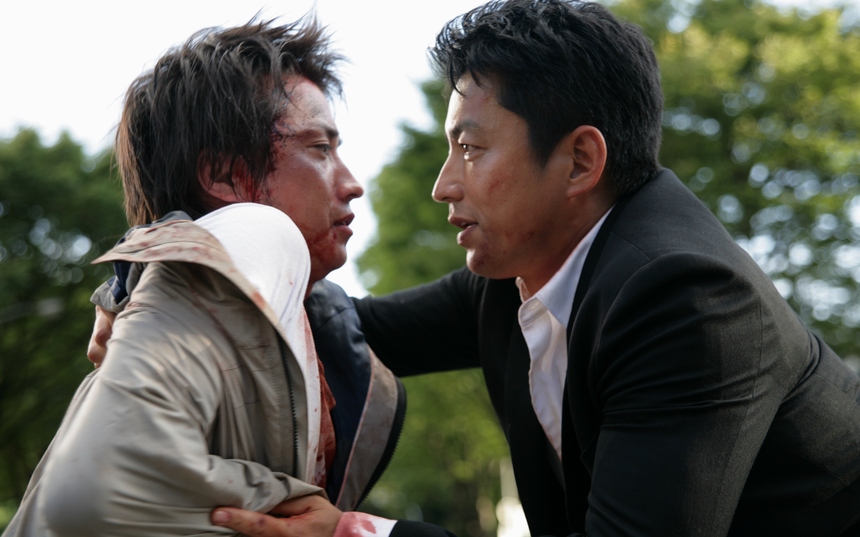 There are so many ways in which Takashi Miike's Shield of Straw falls short of being the knockout that it could have been, it's hard to know where to start. The script alone could easily inspire a novella detailing all of the plot holes, gaps in logic and insanely repetitive exposition. Miike seems, as usual, indifferent to these types of elements, but the real shame is that the man responsible for some of the smartest, most insane, exuberant, boundary-pushing Japanese movies of the past decade has brought the story to life with such flat, joyless direction.

And yet, it really could have been a knockout. Not only does the concept have potential to yield a truly awesome action/thriller, but a number of ideas that the film plays with are both interesting and subversive in the best way. On a much better day, this could have been a tough, intense action movie that raises questions about good, evil, loyalty, honor and revenge with a complexity for which genre films rarely strive. The moments where the film actually comes together and works on this level are strong enough to almost make it worth recommending. At the same time, the wasted potential makes it all the more frustrating.

The plot concerns a billionaire who takes out ads in every newspaper offering a billion yen to anyone who kills the man that raped and murdered his seven year old granddaughter. Hoping to avoid the angry mob, the criminal turns himself in. The police then have to escort him safely to Tokyo for trial, where he will presumably get the death penalty. Atsuko (Nanako Matsushima), a star-security officer who believes strongly in his job and the need to punish the man by legal means, is elected to guard him along with a small team. But with everyone in Japan really wanting that billion dollars, it's going to be a bumpy ride.

Bam! How's that for clean, high-concept action? Some honorable guys have to get somewhere and the entire city is against them. Let's take fifteen minutes to set up the characters, throw them in this plot and kick into gear, right?

Not the case. Instead we're treated to nearly half an hour of clumsy, on-the-nose exposition, and rather just letting the decree stand as a gimmick to set things into motion, the script goes to great, convoluted lengths to explain it and make it plausible, which ends up just drawing attention to how little water it actually holds. And the exposition doesn't stop. Throughout the movie, every single idea, plot point or important character trait is expounded upon at least two or three times with no wit or intensity. And this is coming from the director who condensed probably thirty pages of exposition into a high-energy, blow-your-mind montage in Dead or Alive!

And on that note, what has happened to Takashi Miike? The man who was once able to inject even the most cliche genre stories with wackiness, visual pizzazz and spontaneity seems totally on auto-pilot here. The action scenes all look fine, but completely indistinguishable from any other quick-buck B-action movie --  you know, the kind which seem to come out in January in the U.S. One car-wreck-explosion spectacle on a highway honestly feels like Miike making a bid to be Michael Bay. But even as far as that sort of thing goes, it doesn't top anything in Bad Boys 2 though.

Nonetheless, the first hour passes painlessly enough, though not as quickly as it should. But when the film begins to engage its more intriguing ideas -- for example, how many casualties are justified just to bring an unapologetic child molester to justice by legal means? -- the action stops dead. Characters begin to argue about the same moral quandaries for long stretches while the film's plot holes slowly expand underneath them.

It's a shame, because the complexity with which the film engages the themes of revenge and justice is incredibly refreshing, especially for a genre that are usually predicated on a pretty basic, wrongheaded notion that justice always equals "bad" guys getting killed by "good" guys. It even ends on an extremely bold note that's honest, hopeful and scathing all at once. As the credits rolled, I even felt a fair amount of affection for the film in spite of all it's problems. Upon more reflection though, I think most of it was aimed toward the taut, thoughtful, daring film in my head and not the messy one on screen.

Do you feel this content is inappropriate or infringes upon your rights? Click here to report it, or see our DMCA policy.
Cannes 2013Cannes Film FestivalShield of StrawTakashi Miike