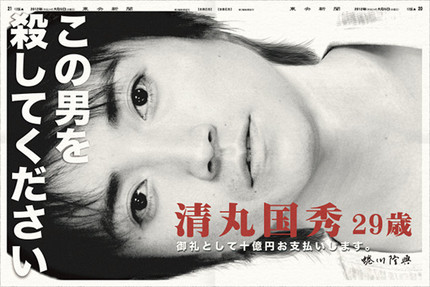 Based on a novel by Kuichi Kazuhiro, the plot is devilishly simple. Fujiwara has been captured and confessed and now must be taken across the country to stand trial, escorted by a pair of police officers played by popular television actors Osawa Takao and Matsushima Nanako. The problem is that his young victim's grandfather is very, very wealthy and very, very unsatisfied with the prospect of conventional justice. And so he is offering a twelve million dollar bounty to anyone who can kill his grandchild's killer en route.

The Japanese theatrical release is planned for spring 2013 but the first teaser and a clip from the film - showing exactly what twelve million dollars looks like when spread out on a table - have arrived online. Check them below.