Review: ERRORS OF THE HUMAN BODY Captures Frailty And Darkness 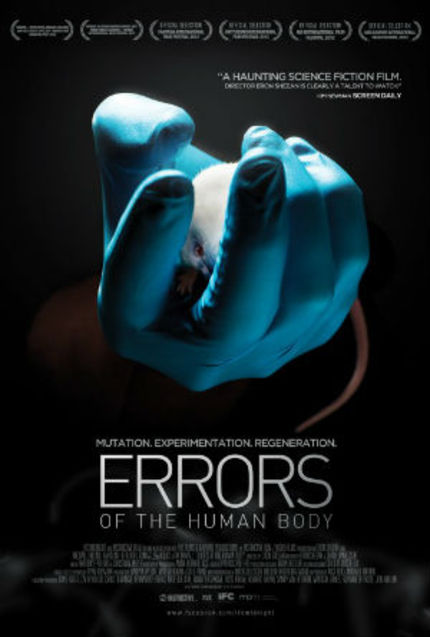 Geneticist Geoff Burton relocates to Dresden, Germany to work on groundbreaking new project, a human regenerative gene. Burton is a celebrity in the field, his reputation based on his work and research into a rare genetic mutation that took the life of his son. His marriage and career suffered because of that loss and Burton is looking to rebound from this tragedy and get to work.

But old feelings surface. At the institute he finds himself teamed up with his former intern, colleague, and perhaps more, Rebekka. And there is also Jarek -- an ambitious scientist who may or may not be carrying out suspicious genetic research outside of lab during the night -- who eagerly seeks recognition from someone of Burton's status in the field of genetic research. Even the exciting results in Rebekka's research and the mystery of Jarek's suspicious actions cannot distract him, Burton still finds himself haunted by the ghosts of his past and struggles to find solid footing as his moral high ground disappears around him.

Director Eron Sheean shot Errors of the Human Body on location at the Max Planck Institute of Molecular Cell Biology and Genetics in Germany. Sheean worked there for a number of years filming and photographing the work of the scientists. The sterile and cold environment serves the film well as Burton struggles to relate emotionally to Rebekka as she seeks out an emotional connection with him in return. This cold and clinical environment also complements the frosty reception Burton gives Jarek, who only searches for approval from Burton, someone Jarek feels would approve of his rogue research practices and attitude. These troubled relationships stand out against this cold and stark background.

Yet, despite the cold German winter outside and sterility of the clinic, Sheean's screenplay easily addresses the frailty of human emotion and the darkness of guilt and shame. Michael Eklund fully embodies the damaged and fragile Burton and the man struggling to find some moral recovery and stability in his life after five years of personal sorrow. Rebekka (Karoline Herfurth), already struggling with her feelings for Burton as he spirals in his personal darkness, faces further despair when the truth is revealed about his son's disease. We see that the source of his pain and anguish may never go away.

Will someone please get Michael Eklund into a David Cronenberg film! One cannot help but get the sense that the recent demands on him physically as an actor in The Divide and here in Errors of the Human Body would make him a perfect fit for a Cronenberg body horror style of film. I want to see this. Someone make it happen! Someone make Cronenberg go back to his style of horror film he did back in the 80s and 90s and then cast Eklund in it. Please.

Full disclosure: XYZ Films - where ScreenAnarchy founder and editor Todd Brown is a partner - served as executive producers on the film. Todd was not involved in the editing of this story.

Review originally published in connection with Fantasia 2012. Errors of the Human Body opens in New York and Los Angeles on April 19, and will also be available via various Video On Demand platforms, including iTunes and Amazon, under the IFC Midnight banner. Check the official site for more information.

Errors of the Human Body