Review: COMMUNITY S4E11, Basic Human Anatomy (Or, Commit To The Bit, Even When It's Not Great) 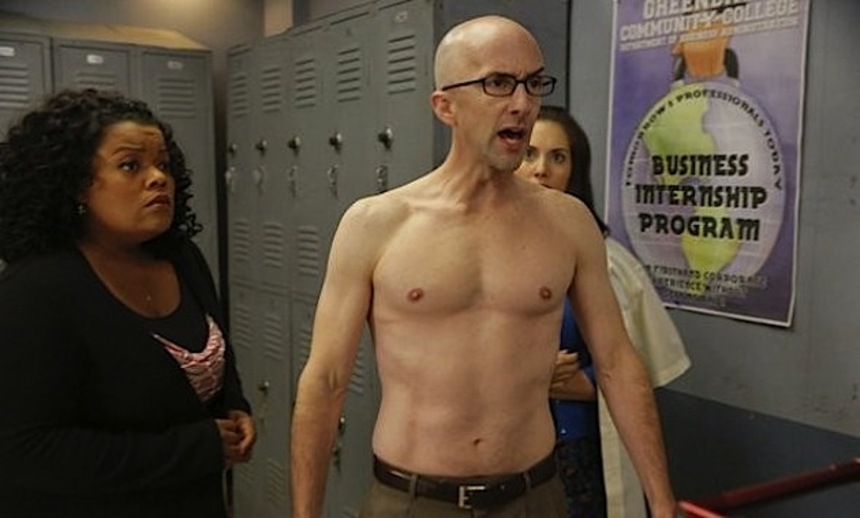 Basic Human Anatomy is an odd duck of an episode. It shouldn't work based on a number of reasons going in, but then largely succeeds on some of those same reasons (and then some), thus proving that the craft of executing a television show in all its stages (from writing to performance) is a rather nuanced, hard-to-pin-down specter (less a muse) of creative urges and tasks.

The task at hand tonight is to address the status of Troy and Britta's relationship, which has been one element of this season that never quite felt justified or even really very real... despite so many of us wanting the two to get together. I haven't talked about their relationship in quite some time mainly because it was largely put on the back burner after just a few episodes into the season. The writers never quite seemed to wrap their collective mind around the construct of Troy and Britta as an actual couple, so by default neither did Troy and Britta, which is how Basic Human Anatomy was born. This makes for a difficult episode on many fronts, but the fact that the writers are addressing the inert nature surrounding the characters' relationship this quickly is a testament to all sides of the show. Nipping it in the bud now means things will be easier for everyone as we move forward... assuming the show is going to get at least one more season...

The Dean himself Jim Rash, is the particular pen behind's tonight's episode, and as it goes the plot is this: The study group have one final joint project for history. Seeing that Professor Cornwallis is half-assing even his assignment letter (he can't even finish signing his name), Jeff proposes that the group pick a project that is "doable" and "passable" and nothing more. Both vying for valedictorian, Annie and Shirley struggle through this idea, but agree to this... sort of. Meanwhile (or rather concurrently), Annie reminds Britta and Troy that Friday is the one year anniversary of their first date at Senor Kevin's. Initially surprised at this, they both are then underwhelmed, with Troy shifting his attention to Abed, giving his BFF a stack of body-switching themed movies on account of it being the third anniversary since they first watched Freaky Friday together. They do a bit, pretending to switch bodies, no one is amused and the day goes on. Come the next morning Abed wakes up in Troy's body, and Troy in Abed's. Or, well, Troy has decided to commit to the bit with Abed going for broke too. It's obvious that Troy will do just about anything at this point to postpone the anniversary date, which now means Abed is going on the date with Britta. This also means that until the two switch back the group has hit a snag in finishing their project, so Jeff goes along with Troy as they search for the lost Freaky Friday DVD that was initially used in their bit as the device that made them flip-flop.

No Community fan in their right mind would totally deny the idea of, or the relative enjoyment that one could derive from watching, Danny Pudi doing a Troy impression and Donald Glover taking on Abed. They're both cute and very animated, playing up the base stereotypes of each character. What may be even better about this body-swapping scenario is that The Dean then tries to prove to himself and everyone else that he and Jeff have switched bodies. There is no denying that the best laughs tonight came from Rash trying on a little of that Winger charm, which included confronting Leonard shirtless. It's cracking stuff to be sure, but then again the most consistently strong material this season has all but gone to Rash, so it's no real surprise how well he runs with it.

What is a surprise is how well the rest of it works, considering that at the same time it perhaps shouldn't. Right off the bat my one major gripe with this episode is that it's been one year since Troy and Britta's first date. As last week was only Christmas does this mean we've jumped ahead in their timeline to coincide with our/their April? I can buy that, but that would then totally drop the idea that Jeff was trying to graduate mid-year, right? And also means that History was a year long class... or have I forgotten something?

The ending that works then is the emotional one. Troy's confession, first to Jeff and parallel of Abed's to Britta, but then actually from himself to Britta, hits home if only because there are so many layers in how all of these people support and understand each other, even through the tough times. Yes, it may seem awful for Britta to be getting the brunt of the break-up from Abed, but it works in large part because she understands Troy's fears and actions, which she is then able to let go of somewhat out of sheer empathy. The final moment in the study room where Britta pulls Troy back for a big hug may seem like they are back on the road to being just friends a bit too quickly, but it proves this more complex place of being and hurting and understanding that I'm talking about. Nothing is ever easy, even when it is. Case in point: this one last private moment between Troy and Britta most of all hearkens back to some of those initial warm and tender times that led them to becoming a couple in the first place.

- Annie being smitten by The Dean's Winger persona was undeniably great.

- While Pierce sat out much of this episode, he kept plenty busy, making some kick-ass banners in just 25 minutes.

- The Dean's speech where he tried to get in the words "having Jeff inside of me" in as many times as he could was another magnificent play made by Jim Rash (with a fine assist from Joel McHale).