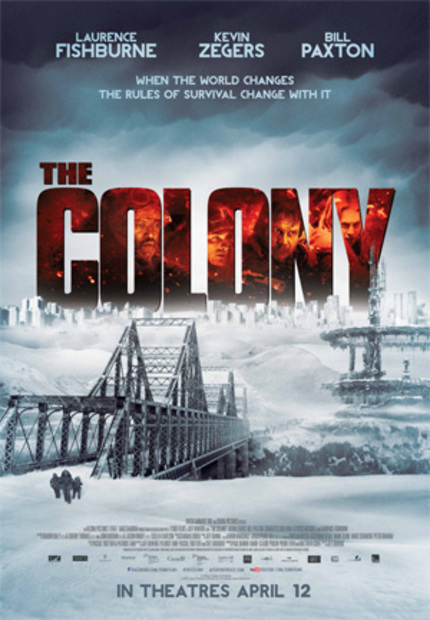 Just over a year ago, I found myself flown to Northern Ontario to visit the set of an ambitious Canadian-produced post-apocalyptic thriller starring Kevin Zegers, Bill Paxton and Laurence Fishburne. The trip to The Colony set was memorable for several reasons, from the epic interview I got to conduct with a slighty amped Paxton, to finding that Fishburne didn't really want to talk, as he (and his small entourage) had just got of the plane. Plus, we got to have our own sense of real-life drama when the weather turned bad while underground, forcing our plane to need late night repairs and having us held up in a small town hotel bar.

I assume this is the way I'll handle the weatherpocalypse when it finally comes, so it was good preparation on that front.

I've had a chance to see the film prior to its red carpet premiere last night, and I'll have more to say on that later. For now, we present this exclusive interview shot last evening in Toronto. We talked about the challenges of doing a  film of this scope while keeping within the budget, of working with such iconic performers, and what kind of things they coughed up while working in Toronto's decommissioned Hearn Generating Station.

Thanks again to eOne (and those formerly of Alliance) for helping setup this chat.

Note: There was an issue with the audio provided by the studio's videographers for both Zegers and Renfroe, we've done our best to clean it up.

Do you feel this content is inappropriate or infringes upon your rights? Click here to report it, or see our DMCA policy.
Bill PaxtonKevin ZegersLaurence FishburneNoradThe Colony