Review: THE COLONY Leaves You Cold 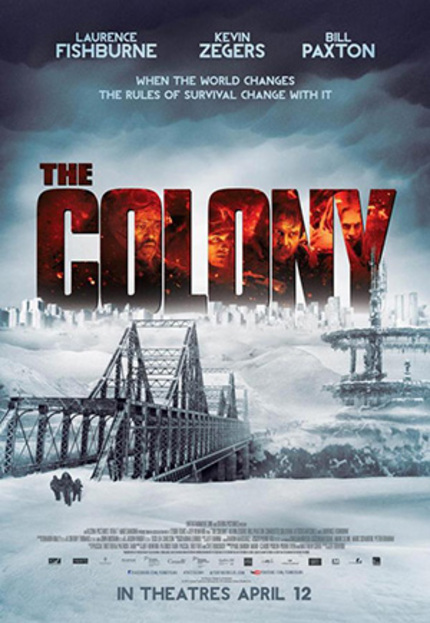 Man, I had such high hopes for The Colony.
Sure, my feelings of hope were coloured a bit by a set visit a year ago that went comically awry. This low-budget, independent sci-fi film, starring Kevin Zegers, Bill Paxton and Laurence Fishburne, was shooting an hour's flight north of Toronto in an abandoned, subterranean, Cold War-era NORAD Air Defence base.

Once we arrived (and were greeted by the mayor!), we traveled 600 feet under ground to visit the sets, strewn amongst the detritus of and cabling from the previous tenants. This was the first film to shoot in the Bunker, and likely the last.

The scope of the project looked immense, and shooting with an Anamorphic kit on Alexis cameras made the thing as glossy as any Roland Emmerich film. Couple this sweep with some smart writing, stick in a bunch of stalwart actors, and you should have a genre classic that rivals The Thing, but with an environmentalist bent. Since we also got stranded overnight, it allowed us to bond a bit with some of the crew.

So, while I did get a pretty fun interview with Mr. Paxton out of it, I did not get what I wanted. For The Colony isn't very good. It's a by-the-numbers film that involves a lot of running around, a lot of stern expressions, and pretty much every cliché you can think of.

Paxton plays one of his old school characters, the whining, intense guy who's worried "they're everywhere, man." They tried hard, dammit, but it's they failed at making him anything less than a grizzled caricature of his role in Aliens. Fishburne comes across with a bit more regalness. And while he too isn't doing much of the heavy lifting, he at least seems to be enjoying the ride.

The star, really, is Kevin Zegers, and bless him for giving it his all. He genuinely seems to inhabit his character, and there are moments when he helps distract from the more maudlin elements going on in front of him.

Alas, behind the facade, beyond the fine production design, slightly less fine model and effects work, there's a pretty silly premise. Sure, it's an "Us-vs-Them" standoff the way you'd expect, but it's hard to believe that it's so simple to follow tracks in falling snow, and that it hadn't been done previously. Besides, if you're going to be slaughtering for meat, why not actually stop and enjoy it? At least zombies are driven, by definition, by a complete lack of self preservation and rampant consumption. And while I like the downed 'copter set, it does seem that somebody would have had to shovel it out once in a while, no?

Alas, if that's the point, the grand metaphor of a cannibalistic culture that feeds upon itself to extinction, then it's not a very interesting one.

The darker part of me had also kind of hoped it'd be really, really bad. I had cooked up some good scatological puns ("The Colony is colon-y!") while sitting at a bar in North Bay, but even they seem out of place. Mostly I'm just kind of disheartened. There's a core of a good movie here, I think. A decent cast, an affable director, and a script that had been honed for years. Yet in the end, there's little to recommend the film. Despite the scope, it rarely feels particularly cinematic, almost as if it's not claustrophobic enough. I wanted Das Boot levels of suffocating dread; instead it felt like those oft-used sets on sci-fi televisions shows where things are grimy but not too grimy.

The Colony isn't good, and it isn't terrible. It is, unfortunately, pretty forgettable, and for that I'm almost more disappointed than if it had been either end of the spectrum.

Do you feel this content is inappropriate or infringes upon your rights? Click here to report it, or see our DMCA policy.
Bill PaxtonKevin ZegersLaurence FishburneThe Colony