Dallas IFF 2013 Review: A COMPANY MAN Is A Bittersweet Life In A Wanted World 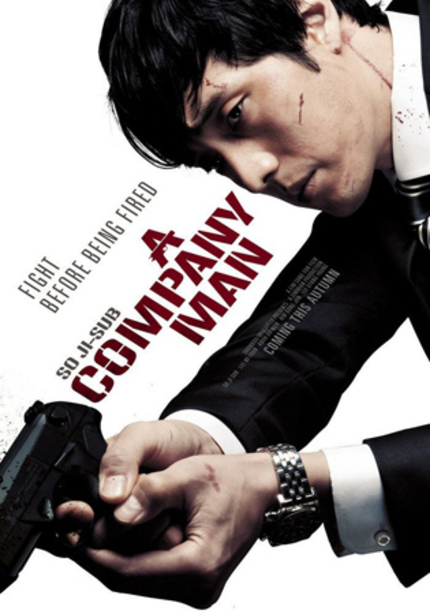 You know what, I'm not even sure that I still get excited about the appearance of new Korean revenge thrillers anymore. It seems as though that's all that anyone is interested in now. Sure, very few national cinemas have managed to hone the revenge thriller to quite the same fine point as South Korea, but when do we reach the point of diminishing returns? Did we race past that threshold at light speed without even realizing it? It's hard to tell which way is up anymore in this game. At this point, the problem for me is that so many of these films are just really fucking good, thereby making me question my own exhaustion. A Company Man is just such a film. A tightly scripted, fast paced mix of action, revenge, and betrayal that doesn't do anything new but manages to reassemble the same old parts into a new variation that actually works. Go figure.

A Company Man opens with a bang. A young assassin, obviously a pro, blasts his way through a half dozen police on his way to x-ing out a rat under the cops' protection. On his way out the door after doing his dirty work, he meets with the even more highly skilled hands of his employer and ends up a blubbering lump begging for his life or perhaps just one last favor. Cut to said employer entering a large metal manufacturing office cum deep underground spy/assassin headquarters. This organization is highly secretive, naturally, and run by a real prick, to whom our leading man Hyeong-do (played by So Ji-sub) must submit to his own deep chagrin. Soon, "something happens" and Hyeong-do is pitted against not only his employer after failing to complete a job as directed, but also against people he thought he could trust. Cue the bullets.

At only ninety-six minutes, A Company Man is a very tight little film, and that works to its advantage. Even though there is more than enough plot here to fill out a typical 2+ hour Korean film, the action, direction, and dialogue are all extremely economical and the film plays somewhat like a Hollywood version of a Korean thriller, but in a good way. We're treated to revenge, a love story, a story of redemption, some betrayal, secrets, and lies, all in a very short space of time, and it works beautifully.

The story takes a little bit from many sources, or at the very least many different influences, which are relatively easy to spot. The secret assassin agency that literally exists behind a rotating wall in a break room is something out of a James Bond movie, or perhaps even Timur Bekmambetov's recent Wanted. The story line is nothing new either, an assassin/gangster being trailed by his bosses after not following orders is a story as old as time, but the one that jumped out at me in this case, perhaps just because of the language, is Kim Jee-woon's A Bittersweet Life, though A Company Man doesn't quite reach those emotional heights. However, if you're looking for a slick little thriller with a bit of heart, this should do the trick. I really enjoyed it.