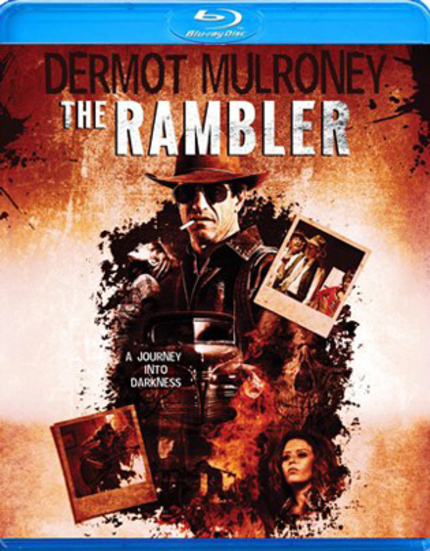 Never thought I'd see the day when a Calvin Lee Reeder film would end up on Blu-ray, but here we are.
On June 25, Anchor Bay will release Reeder's Sundance and SXSW audience-dividing nightmare, The Rambler, on Blu-ray and DVD. I just caught the film at Dallas IFF last week, and it looks pretty fantastic on the big screen, so I'd imagine it'll look amazing in HD as well. An amusing note to me is the fact that Dermot Mulroney's name on the cover is at least as big as the title of the film. That's the kind of star power we're dealing with!

In addition to this home video release, The Rambler will see limited theatrical release in North America on June 7th. No word on locations, yet, but you can be sure I'll post them when I know. In the meantime, check out the press release for The Rambler on home video.

It's the old story...a drifter, some mummies, some vomit

BEVERLY HILLS, CA - Remember midnight movies from the 1970s? Those after-hour slices of cult celluloid that stunned audiences with their mash-up of genres, innovative narratives and psychedelic imagery? Get ready to relive those hallucinogenic halcyon days again, as Anchor Bay Films and AKA Pictures Present An XYZ Films / Brooklyn Reptyle Films Production of The Rambler!

Fresh from sold-out screenings at this year's Sundance and SXSW Festivals, Anchor Bay Films announces the June 25th Blu-ray™ and DVD release of the groundbreaking indie-short turned feature film starring Dermot Mulroney (Stoker, The Grey), Lindsay Pulsipher ("True Blood," "Justified") and Natasha Lyonne (American Pie, American Reunion, But I'm A Cheerleader). Written and directed by Calvin Lee Reeder, The Rambler has an SRP of $24.99 for the Blu-ray™ disc and $22.98 for the DVD, with pre-book on May 29th. In addition, limited theatrical engagements will be announced shortly.

In the film, a stranger known only as "the Rambler" (Mulroney) is just released from prison and anxious to build a new life for himself. Coming home to a faithless girlfriend (Lyonne), he quickly realizes his old life is truly behind him. With the promise of a job and some stability from his brother, the Rambler embarks on a cross-country journey to what hopefully is a new start.

Like Odysseus and other travelers on the road-to-wisdom before him, the Rambler - armed only with his cowboy hat, shades, a guitar and traveling sack -- will encounter all manner of obstacles and dangers on his road to redemption, including a scientist with a dream-recording (onto VHS!) machine, a cab driver with an unnatural love of the original Frankenstein film, "mummies" in the back of trucks and, oh -- did I mention exploding heads?

More about The Rambler