What's He Doing With That Pickaxe? First Art From Dante Lam's THAT DEMON WITHIN 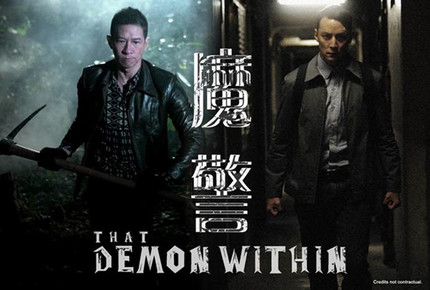 Why, yes. That's Nick Cheung with a pickaxe. And given that it's Hong Kong action maestro Dante Lam who put it into Cheung's hands you can rest assured that it is almost certainly going to be put to very unpleasant use.

The artwork is the first from Lam's That Demon Within, which pairs Lam regular Cheung with Daniel Wu in a gritty crime story.

By a strange twist of fate, dutiful Hong Kong policeman Dan saves the life of the leader of a violent gang of armed robbers.  When they commit another crime, Dan is determined to put an end to their activities.  He works with the leader, whom the gang had betrayed, to engineer a plan to wreak havoc within the gang and let the gangsters kill one another.  But it becomes increasingly obvious to Dan and to his colleagues that Dan is suffering from a severe mental disorder, and Dan finds that instead of upholding the law as a righteous police officer, he has now become a fugitive wanted for murder.

Now in post production it seems a safe bet that footage from the film will premiere at the upcoming HK Filmart. Stay tuned ...