SXSW 2013 Review: KISS OF THE DAMNED Intricately Apes Classic Eurohorror, Warts And All 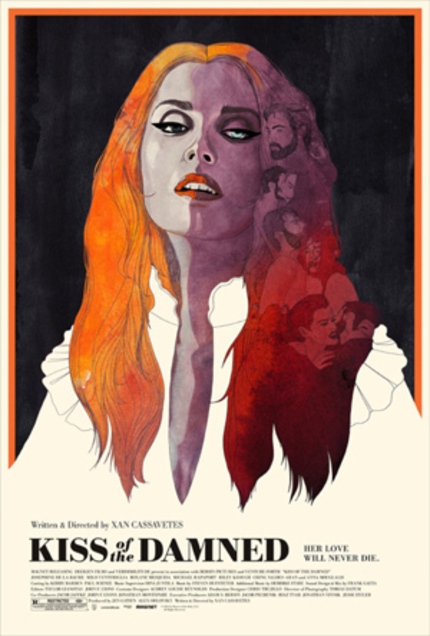 There are few subgenres of film quite as specific and instantly recognizable as '70s Eurohorror. Filmmakers like Jean Rollin, Jess Franco, Jose Ramon Larraz and a few others left an indelible mark on the international horror market. Their creations were just as concerned with sensuality as they were with shock value, and as a result, the films positively oozed sex, literally sometimes. It is from this mold that Xan Cassavetes (Z Channel) debut narrative feature, Kiss of the Damned, was cast. Cassavetes manages to recreate much of the atmosphere and feel of those classic Eurohorrors, often to the point of irritation for a true fan. Is it worth watching Kiss of the Damned when I can now reach into my Blu-ray collection and pull out a classic like Shiver of the Vampire? Yes and no.

As much I enjoyed a lot of what Kiss of the Damned was doing, it is certainly not a film that will inspire many superlatives from me. Part of paying tribute to something as esoteric as Eurohorror is acknowledging its faults, and there are some very significant ones only magnified by the advances in technology and probable leap in budget of this new-fangled redo. That being said, Kiss of the Damned is extremely faithful to the look and feel of its predecessors and the viewer's reaction will be largely indicative of their fondness to or predilection for those films.

Josephine de la Baume plays Djuna, a beautiful female vampire living in seclusion and feeding from the blood of animals. One night when she is out at the video store, of all places, she and the handsome screenwriter, Paolo (played by the eternally scowling Milo Ventimiglia) lock eyes and so begins a passionate affair that seems to erupt out of nowhere. While she first spurns his advances in order to protect him from her own violent carnal hunger, she quickly relents to his unusually steadfast advances and the two begin on their road to eternal damnation. Soon the pair is joined by Djuna's vampire sister, Mimi (Roxane Mesquida), who is a troublemaker and is determined to ruin the bond shared by Paola and Djuna. Things quickly spiral out of control as Mimi and Djuna must now fight for their own futures and best interests while Paolo sits on the sidelines.

I've already pointed out the most basic comparisons that can be made with films of directors like Jean Rollin, but Kiss of the Damned is so indebted to that style that it is impossible to dissect without pointing out the extent to which this film is an homage. Kiss of the Damned's small cast, limited locations, international cast acting phonetically in languages that aren't their own, focus on the sexual nature of vampirism and blood play, and even the film's score and short run time are all note for note matches with films like Fascination or The Nude Vampire. The problem here is that part of the charm of those older films was that these elements are the same elements that made them feel otherworldly, and as such, the stilted delivery of dialogue was forgivable as a way to establish the fact that these stories take place not only in another time, but also another world.  Kiss of the Damned attempts the same, but is only partly successful, largely due to the intermittent reminders that we are in the real world, through the use of locations like the video store and a local bar. These intrusions of this ethereal story into the real world render the stilted dialogue delivery here even more strange and unbelievable.

Not all is lost, however, Kiss of the Damned is absolutely dripping with atmosphere and stunningly gorgeous cinematography. In fact, if there is any aspect of Kiss of the Damned that clearly and decisively advances on those of its antecedents it is the technical brilliance of the film. The widescreen compositions are never less than stunning, and the use of music is easily on par with the films to which Cassavetes is paying homage. I really enjoyed the story as well, it was a bold move on Cassavetes' part to attempt referencing such a particular niche of films as her first feature. I also think that much good can come from this, if not directly, then at the very least indirectly by perhaps exposing new film fans to this kind of film and giving them a point of departure to investigate from whence this film evolved.

Xan Cassavetes most definitely shows promise with her first feature film, and while it is far from a masterpiece, it is certainly destined to land solidly with a certain audience. Kiss of the Damned is one of the boldest horror stories I've seen in a while; bold especially in its patience, an attribute which eludes many filmmakers these days. The languid pace of the film will certainly leave many modern horror fans yawning, but for those with an old school attention span and a love for the slow burn, there's definitely something for you here.

Do you feel this content is inappropriate or infringes upon your rights? Click here to report it, or see our DMCA policy.
kiss of the damnedSXSW 2013Xan CassavetesJoséphine de La BaumeMilo VentimigliaRoxane MesquidaAnna MouglalisDramaHorrorRomance