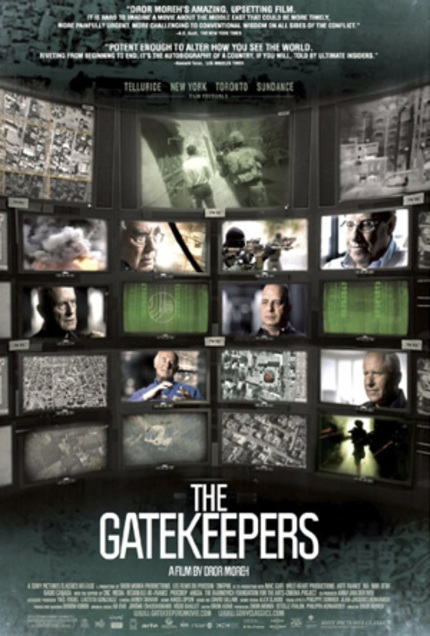 It came as no surprise in retrospect that The Gatekeepers is a film celebrated by Errol Morris. Having missed the film when it played TIFF last September, I had assumed, incorrectly, that it'd be a dry piece, merely talking heads parsing out careful responses. Instead, we get something quite remarkable, a decidedly open and honest account from those at the forefront of the Israeli interior security apparatus, and the ambivalence they feel towards their protracted role in helping secure their state while combatting acts of terror.

Director Dror Moreh cites Morris' The Fog of War as a major influence, and it's easy to see how that other, often misunderstood film can provide a benchmark. Some superficially looked to Fog as either an indictment or an apologia for McNamara's policies, while others felt that Morris didn't go far enough in attacking who they feel to be the architect of the Vietnam debacle. It's the strength of Morris' film, and in turn Moreh's, that the truth behind the knee-jerk politics is far more "foggy" than one's own political bias would present.

It's truly remarkable the frankness exhibited by the surviving leaders of Shin Bet, the interior "MI5"-style service in contrast  to the foreign-oriented "MI6" that is served by Mossad, or the NSA-equivalent military intelligence service Aman. What complicated Israeli policy in general is that what counts as "internal" is a shifting goal post, and Shin Bet has played since the '67 war a frontline role in keeping Israelis safe, as well as being responsible for all forms of internal counter terrorism.

The film is unflinching at looking at some of the more egregious incidents attributed to the organization, from the failure to prevent the assassination of the Prime Minister at the hands of a radical Israeli Jew, to the incidents regarding captured hijackers who were then murdered once put into custody.

Each participant comes across as eloquent and introspective, and some of their statements are quite shocking, particularly to an audience more used to a far less nuanced take on the Palestinian/Israeli issue. Each to a man talks of the necessity to engage with one's so-called enemies, each finding the restraints of politics, with its binary yes/no decision apparatus, restricting and frustrating.

It would be easy for those predisposed to find fault in this "occupier" regime to draw some of the more startling quotes, such as when Avraham Shalom actual equates the behaviour of the IDF to the actions of Nazi Germany. Out of context this is a shocking statement, fuel for an anti-Israeli crowd, and immediately putting on the defensive any that are staunchly pro-Israel, no matter what occurs politically in the country. As the quote plays out, you see the subtle point that Shalom and others are making, the real costs of living with neighbours that are participating in existential conflict with, the role of the religious right in Israel versus those on the Palestinian side who wish to crush what they see as non-endemic enemy state.

In its best light, this film would be seen by those with a simple view of Israel, pro or con, and allow them to question some of their strongest held views. This film helps illuminate the real world dynamics behind the rhetoric - each man is of course a patriot, willing to sacrifice for his country, but remains introspective and frankly human enough to see the toll that this is taken.

While I'd love to see a similar reflection from Fatah or even Hamas/Hezbolah leadership, it's unlikely we're going to get something approaching this level of candour, at least not during current regimes. It's a testament to the dream of Israel as a liberal, democratic state that their most illiberal institutions of internal security are still under the yoke, for better or worse, of political forces. It's shown how sometimes the politics interferes, both for the better or for the worse, in decisions that are most certainly at the level of life and death.

The Gatekeepers is a humbling film, one with far reaching implications for a wide variety of nation states. It shows dramatically where esoteric notions such as morality are eschewed for pragmatic necessity, where a conflict with member organizations that do not abide by so-called rules in turn contribute to a rule-abiding state finding itself breaking its own codes of morality for the sake of a higher goal of security. More importantly, it shows at least the germ of why these things occur, of the reasons behind actions that in an ideal world one would not have to engage in, while recognizing that the Middle East in particular is far from an ideal neighbourhood.

There's a tremendous amount to unpack in the film, and it would do the work injustice to approach it in a superficial manner. It's easy to see how a few quotes pulled from the main could lead one to draw very radical conclusions, but as a whole work Moreh and his collaborators have managed something quite remarkable indeed.

At its best, the film would be seen by those staunchly anti-Israel in a more conciliatory and less ideologically blinded fashion, while for those who find no fault with Israeli behaviour being able to see that even for those at the knife's edge the decisions are anything but simple to make and without ramifications

The Gatekeepers is perhaps just the beginning of such a frank conversation, but it's one that goes beyond simple entertainment of a feature film, and gets to the real heart of how the competing forces of keeping a country safe continue to shape events in this most turbulent of regions. Powerful, poignant, this is easily one of this year's finest documentaries, its Oscar nomination well deserved.

More about The Gatekeepers