Now on Blu-ray: THE MASTER Remains A Compelling Mystery 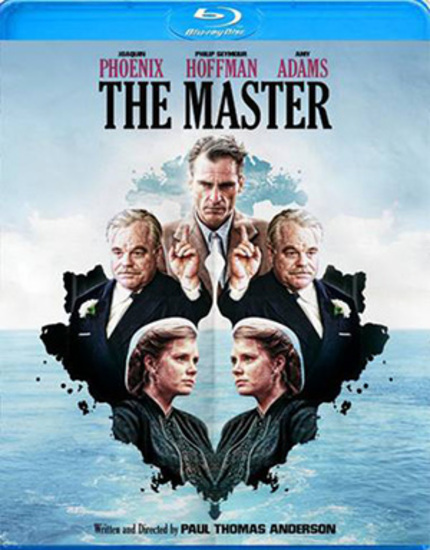 I've thought, argued and written more about The Master in the last year than almost any film in my life, yet it remains a hard work to love. Paul Thomas Anderson's paean to Hustonian excess, along with loads of debatable influences drawn from the work of one LRH and his Scientological church, did much to divide audiences, rally critics, and do what any interesting film should do - make people care about the work, whatever their reaction is to it.

The day after the TIFF screening, I wrote a manic, fever-dream version of a review. In a series of back-and-forth ramblings, I tried to bring across not only what the film was, but how at its best it made one feel watching it. We published a slightly more coherent version of that longer piece at ScreenAnarchy (thanks to so patient editing by our stalwart team here), but the shorter version kind of lacks the sheer madness the film engenders.

Forgive a minor spoiler, but this pretty much summed how I felt after the first take on the work:

They were just riding.

They were on that motorcycle, going as fast as they could, and it still took 2 1/2 hours. And it was brilliant.

And it was empty.

Days later, even after TIFF was over, I couldn't let the film go. I then wrote my take on the differences between the 70mm and 4K versions of the film - I'm still seeing some reviewers miss some of the salient points I raised in that article. The central aesthetic point remains, however, as it's on digital that this film will live long term. PTA's loving fetish for close film grain (there's still a bunch of 35mm shots in the work), cropped aspect ratios and the refusal to "dustbust" the Digital Master (or even, allegedly, the digital addition of such schmutz) makes for a unique look to the work, even at home.

That said, this is a film of big, broad emotions - even the fanciest of home projection setups cannot compete with how the director intended the film to be seen. This isn't something we can normally worry about, especially when tackling a Blu-ray release, but it's at least at the central core of PTA's desire/obsession with large format presentations, the laudable desire for a film of this nature (and caliber) to be seen with an audience on a properly calibrated, properly staged presentation.

So, given all these caveats, how does the damn thing look?

Not surprisingly, the harvested-from-mostly-70mm footage looks damn good, even at home. Without the wider colour space of both the 4K DCP and the 70mm print, there's a bit less of a sense of the rich, Kodachrome-like hues. Watching on a Kuro, one of the better sets ever made for colour reproduction, there's still a certain "punch" lacking in the browns, oranges, and lightning-like cyans that PTA's film could draw out theatrically. There's slight shimmer in some scenes that are backlit, mostly due to the changing choice in stock, with the jump down to 35 resulting in what some might confuse for "noise" after the more pristine look of the 65mm negative footage.

Sound wise, Greenwood's score is punchy and effective as always, the dialogue as clear as the filmmakers intended it to be (Joaquin's marble-mouthed delivery is intact).

What's clear about this disc from eOne is that this will not likely be the final word on home releases for this film. There are a few interesting bits added, but given PTA's proclivity for extensive extras, one can only hope/assume that the likes of Criterion are working on a definitive release.

Back Beyond runs about 20 minutes, and incorporates many of the numerous deleted scenes that had previously been assembled in a series of extended web-based trailers prior to the film's wide release. Some of these scenes are stunning (the jumping off the ship in particular is a sterling image), and while one can see that making things too explicit is sometimes a fault of lesser filmmakers, there really are a few bits that provide genuine clarity to a couple of the more opaque moments of the film.

Behind the Scenes includes an eight minute, fly-on-the-wall (well, cell-phone-in-hand) take on the filming of a few sequences. Clearly the extensive b-roll shot on set is deserving of something a bit more thorough than this, but it's actually a pretty fun watch, with the musique concrete vibe of the walkie-talkie sounds, mixed with onset hijinks and gratuitous dolly setups. Give me a few more hours in this format (ideally with slightly better camerawork) and I'd be more than happy.

Man Is Not An Animal is a minute long assemblage of deleted scenes, one of those web-based trailers mentioned above. The 2 minute long original Theatrical Trailer is also included.

Finally, Let There Be Light is perhaps the most interesting supplement. This hour-long documentary from 1946, directed by John Huston, played a central role in the development of The Master. Its inclusion is very much a welcome one, and with all the talk of Hubbard, it's quite fascinating to see another facet that PTA drew from to create his dreamlike, perplexing take on these fascinating characters. The film's in a bit of rough shape, including audio drop outs and loads of film damage (it's in the public domain, being a government film), but it's clearly an interesting document of what at the time would have been completely shocking to a general audience. Back in 2010, Let there Be Light was inducted into the US National Film registry, joining alongside that year the likes of The Exorcist, Airplane!, Malcolm X and The Empire Strikes Back.

I'm still drawn to The Master, despite its many flaws. Like anything hypnotic, the more you take it in, the more some of its more egregious moments are softened, its unanswered questions no longer a bother to you. I do think it's a film worth tackling more than once, and the disc certainly lives up to expectations for home presentation.

I can only assume we'll be seeing a bigger, more definitive take on the film, but given that it didn't quite have the awards push that the backers may have been expecting might mean that it'll be sometime before that happens. That might actually be for the best, I for one would like to see a few years out some more sober reflection upon the work, not to provide quick and easy answers about the films many riddles, but to better document the making of such a unique, sometimes dazzling, sometimes bewildering film.

Until that happens, what the heck, go pick up the disc. I guarantee it'll look a boatload better than watching it via any streaming method, and this film deserves the best possible presentation you can provide it. Until I get 70mm or 4K projection at home with a 70 foot+ screen, I'll be more than content with this disc.

Do you feel this content is inappropriate or infringes upon your rights? Click here to report it, or see our DMCA policy.
4K70mmamy adamsjoaquin phoenixPaul Thomas Andersonphilip seymour hoffmanThe Master

More about The Master