Jim Tudor
Featured Critic; St. Louis, MO
Tweet Post Submit
I'm glad everyone had a good time, really I am. Another Super Bowl has come and gone. Baltimore is happy, San Francisco is hurting, the Superdome is recovering, and we're all a bit fatter. The Super Bowl is the most watched television event each year, and with thirty seconds of ad time selling for $3.8 million, you better believe the NFL & TV network powers-that-be understand every cent of what that means.

Not to rain on a perfectly good power-outage addled pro sports mega-event, but it must be pointed out that in this day and age, what was once just a game has become the apex of hollow consumption in our culture. A mass media event with its high gloss tentacles in every facet of the culture it can reach, including the movies. Marvel chose to beat the kettle for their upcoming Iron Man 3. (Watch trailer below.) 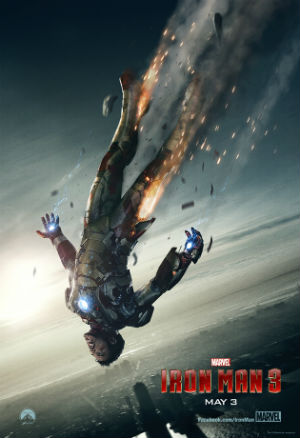 Okay. We get that in Iron Man 3, he can't carry everyone. As dynamic as this bit of business is, it's perhaps understandable that many viewers found it somehow underwhelming. Marvel used this ad to route people to their website for a sixty-second longer extended look at the movie, footage that offers a more fleshed-out pastiche of what they want us to believe the film will feel like.

But they must know that only a fraction of the people who saw the 30 second spot were likely to do that extra bit of homework, and those folks are probably the pre-sold fans, anyhow. So, from a business standpoint, should Marvel have ponied up the extra $7.6 million for the extra Game Day ad time? Or maybe tried a different half-minute of cool stuff? Would it have mattered if they ran a spot at all? Come May, will anyone remember that the Super Bowl ad was kind of lackluster? History actually says yes, although compared to where we currently are on the calender, summer seems a long ways away. But first, let's look back just a little bit. Back all the way to...

January. Grey, cold, overcast, desolate. As far from Christmas as you can get, yet the previous holiday still lingers longingly passed in the rear view mirror. From where I sit - the American Midwest - this is typical of the dreaded first month of the year. So I suppose it's no surprise that, culturally speaking, by month's end we are so desperate for a spark of celebration, we've manufactured a holiday out of a football game.

As the single biggest game of the year (advertisers who refuse to pay the NFL licensing fees to use the term "Super Bowl" go with "The Big Game"), in our Western culture of celebrity worship and sports obsession, this admittedly makes sense. But over the course of XLVII Super Bowls, the game itself has almost become a footnote in the face of the massive cash-driven media-blasting spectacle piled around it. The whole thing is inescapable. Even those who have no interest in football, maybe not even knowing who's playing, host and/or attend Super Bowl parties; so desperate are we for holiday. Forgive my detached cynical take on all of this. Perhaps this is the result of one too many Terry Gilliam movies. Or, just maybe, our veil is starting to be lifted just a little bit. (To what degree have we lived our lives too big, too blind, and too distracted for how long?)

I digress... No holiday in America would be complete without the mass selling of things. The Super Bowl holiday (sorry, "The Big Game"), for lack of any kind of more substantive bedrock, may just be the ultimate selling holiday that's not really a holiday. (In a world when we've managed to completely contort all the old standby major religious holidays into shopping marathons, and it's still not enough, it's really come to this.) Madison Avenue doesn't see a game. It sees a pie. A big, expanding, sickeningly sweet uber-indulgent pie, and after dismal ol' January, who can blame anyone for not wanting a slice. 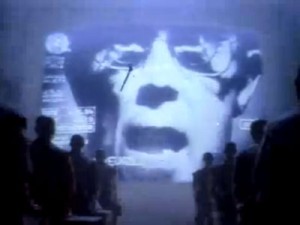 And so. Super Bowl commercials. An institution as ingrained as the game itself. Some say more viewers tune in to catch the big-dollar custom-built precisely orchestrated ads than the football. It's the only time each year when people gather recreationally for a televised event, and the crowds are shushed when the commercials come on. Some are highly admirable in their cleverness. These are the true quality ingredients in the pie: Mean Joe Greene's jersey. A thousand cats being herded by rugged cowboys. A giant dystopian video dictator smashed by the thrown hammer of (female empowerment? Ridley Scott? George Orwell? No...) Macintosh. A Master lock shot through but uncompromised. These are just a few of the all-time great commercials synonymous with Super Bowl advertising greatness.

Lesser ingredients include shameless use of animals (both real and CGI), grotesquely cute kid-sploitation, corporately appropriated patriotism, and disjointed celebrity shilling. Amid this tradition within the tradition, there is yet another rising tradition - the Super Bowl movie ads. Bunched up among everything else, they are admittedly easy to miss. No movie ad has ever scored highly on the annual USA Today Ad Meter. And yet, for geeks, tracking the reveals, the new footage, all the mind-numbing minutiae that Super Bowl specific movie ads can offer to fans, it's no surprise that they've become a point of anticipation in and of themselves. It's gotten to the point where the studios are actually releasing brief promos for their upcoming Super Bowl ads in the week beforehand. Hype for the hype! That Iron Man 3 commercial? It was preceded online by this clanking montage:

At nearly $4 million for thirty quick seconds, it's easy to see why advertisers are keen to make sure their thirty seconds is an event unto itself. But the movie ads don't ever break form the way, say Ridley Scott's incredible Macintosh "1984″ commercial did at the time. The uninformed novice will pre-judge the film in question based upon the appeal of the slammed-together footage. It's the exact same pre-judging that would be applied to any trailer, TV spot, or online clip that happened to catch their eye, only now they're presumably doing it while balancing nachos, beer, soda, and cake at a Super Bowl party. Ten years ago, the Super Bowl spot for Ang Lee's Hulk did not pass muster with this crowd.

That's an ad that I did not find uncool by any means, but apparently I was in the minority. The shredding guitar rock, quick editing and familiar line about not liking him when he's angry did little to dissuade the perception of poor visual effects. Universal Studios let it be known that the video game quality Hulk visuals witnessed in that ad were works in progress, but it was too little, too late. Although Hulk managed to open at number one the weekend it came out (about half a year later), it quickly fell off, its ill-fated Super Bowl commercial cited as a major reason for its own box office "failure."

Today, Iron Man 3 is generating similar shrugs like Hulk did. One thing's for sure - when Banner and Stark drove off together at the end of the The Avengers, neither of them could've known that they were heading for that shared fate. (Despite the disappointment many have expressed with the Iron Man 3 spot, it still ranked highest of all of the 2013 Super Bowl movie ads in the USA Today Ad Meter. Faring less well on that annual survey but better on Facebook and elsewhere were Fast & Furious 6 and Star Trek Into Darkness. The Lone Ranger might as well have stayed in the desert.)

All of this can put the thinking film fan in a torn state. Anticipation of certain movies is part of the fun, but the corporate/studio manipulation that we must learn to see through is a big part of that anticipation. On Sunday, we saw ads for film after film about characters who ostensibly dare to heroically buck the system, asserting individuality and machismo in the name of some sort of justice. So I ask this question: Would Tony Stark, Captain Kirk, Vin Diesel or the Lone Ranger simply sit back and passively ingest the steady stream of what the superstructure around them is telling them to accept? By all means, look forward to and enjoy movie marketing for what it is, but at the same time, we must not lose sight of the irony that the process of marketing and packaging such dashing rogues is the Machine at work.

And with that, January is officially passed. From here, it's a quick few weeks to a series of other ingrained holidays that have long since lost their original meanings for many people. Valentine's Day ... St. Patrick's Day... and Mardi Gras...! Amid all of that, movie fans arrive at their own Super Bowl, the annual Academy Awards, a smaller mass spectacle rife with its own set of issues.

But, once the film awards season is laid to rest that night, it's a beeline into Easter and then summer. And then, we can see for ourselves whether or not Iron Man really can't carry everyone. Good times ...