Jim Tudor
Featured Critic; St. Louis, MO
Tweet Post Submit
Previously in this column, I took a comparing/contrasting look at three of this year's Best Picture Oscar nominees, Zero Dark Thirty, Django Unchained, and Lincoln. Now it's time to continue the process of asking whether or not the nine Best Picture nominees are as much of a topically unrelated jumble as it appears, or are there some connections? The dot connecting continues with this year's current frontrunner: 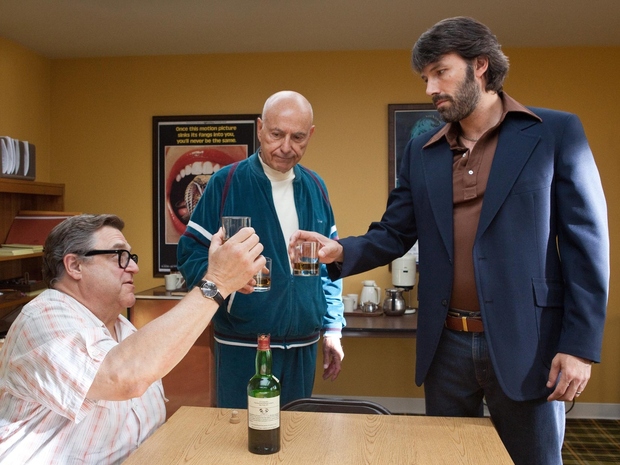 Argo is in the strange position of becoming the first film in recent memory to take the gold thanks to a snub. The fact that director Ben Affleck (who also stars in the film) was overlooked in the Best Director category seems to actually be doing the trick of elevating Argo over the one-time sure thing, Steven Spielberg's Lincoln. Typically, films that fail to garner a directing nom do not cross the big finish line. But this time, in this loopiest of modern Oscar races, things seem to be legitimately different. Why? Let's look at the film itself for a moment (Spoilers follow...):

Many have commented that narcissistic Hollywood has reason to love Argo because Argo let's Hollywood save the day. True enough. Generally speaking, movies are the key to a positive outcome in a serious global situation. But let's take a minute to consider another film in which that was the case, Quentin Tarantino's Inglourious Basterds. In that film, World War II history is rewritten with gusto when a movie theater is ignited, thus destroying the entire Nazi high command. The fuel for the fire is the highly flammable nitrate film archive housed in the theater itself. This instance, however, of movies themselves being the key to victory was too violent, too brazen, or too European to net Inglourious Best Picture (which it was in contention for).

Argo removes Tarantino's wonderfully insane flourishes, replacing them with reality-rooted plausibility, only a wee bit amplified from the true story. The scheme? Pass off the handful of Americans secretly holed up in hostile Iran as a Canadian film crew on a location scout, looking to make a Star Wars rip-off in an exotic location. Everything from phony visas and cover identities to fake movie announcements in trade publications must be fabricated. And it's Hollywood itself, with all its self-important yet lovable ticks and foibles, working in close conjunction with the C.I.A., which allows it all to happen. Hooray for Hollywood, indeed.

But beyond that, Argo is ideal Oscar bait for that certain type of year (one in which edgy relevance - but safe, edgy relevance - wins out over costume drama prestige), which we happen to be in. Telling the story of a real life C.I.A. agent who orchestrates the high stakes rescue of six stranded Americans during the Iran hostage crisis of the late 1970s, Argo is that appealing mix of entertaining, important, historical, of-the-moment, and just smart enough to impress. Those looking for an effective edge-of-your-seat process-oriented thriller will be satisfied, as will those who enjoy digging a little deeper for thoughts on extreme reality contrasting with extreme artifice. (i.e., What's more stark "real world" than a tense third world hostage situation? Not much. On the flip side, what's more inherently artificial than the act of making a movie? The act of not making a movie.)

Lacking the hot-potato stigma of fellow Oscar contenders Zero Dark Thirty and Django Unchained, but brandishing more grit, grain, and edge than Lincoln lends itself to, Argo is the safe-money bet. Like ZDT, Les Misérables, and Lincoln, there is a patriotic spark burning somewhere in the heart of Argo, and in the election year that it was released, that counts for something. The notion of dealing with the "other" is perhaps where Argo falls shortest, as the Iranian military are depicted as intimidatingly evil to a heightened degree; cheaply villainized as the unblinking foreign extremists that must be outwitted by America. Even if this is what happened in real life, Argo's caricatures can honestly be read as problematic in the face of most everything else that Affleck was attempting to do with his otherwise satisfying film.


Beasts of the Southern Wild

(This capsule review is a portion of my full length ScreenAnarchy review that can be read here.)

By contrast, our next film is all about the plight of "the other," in all their overlooked strife. Benh Zeitlin's debut feature, the handcrafted wonder Beasts of the Southern Wild, is, at a glance, an anomaly not just in this Best Picture grouping, but in almost any grouping. But, like Tom Hooper's massive and overly polished musical epic Les Misérables, Beasts demonstrates the virtues of resistance and the vitality of holding one's ground (in this case, against both an apocalyptic storm, and well-meaning strong-arming rescue workers).

The world of the film, known as "the Bathtub," with its ramshackle homes (lairs of abandoned signage, plywood and sheet metal rendered shockingly cozy), found-object boats (a hatch from a pick-up truck, a few rusty drum barrels - all of it strung together and somehow seaworthy), and unhinged community (the street celebration that opens the film features a most vibrant depiction of eating, drinking, and being merry, complete with children running loose with fireworks. Gloriously so), is absolutely not the world of the people who "keep their babies in strollers, and eat their fish from plastic wrappers." That's a quote (close enough, anyhow) from the film's 6-year-old lead, a pained but also blissfully wayward little girl who sees, knows, and processes her world as only a 6-year-old can.

Hushpuppy, amazingly portrayed by Quvenzhané Wallis, has known no other existence. She's elevated her gone mother's memory to fairy tale-like proportions, albeit the classically darker and unsanitized fairy tales. Her father, Wink, (Dwight Henry) comes and goes, an aggressively harsh man who loves his daughter intensely, and can't begin to know how to show it. Ruled by a frightening temper and perpetually broke (an epidemic in the Bathtub) but always with enough money for booze - he only wants what's best for his daughter, his only child and enduring legacy in an uncontrollable cataclysmic world.

Although life in the Bathtub is rough and, for the most part, not our own, there can be a certain cleansing that comes from wallowing about in it for a time. Zeitlin is skilled enough to evoke a certain universality in the struggles and apartness of the life experience of these people. Somehow, we are able to relate to them. This, despite the fact that their lives are incredibly different from the lives so many of us know, one of immediately heightened levels of comfort and convenience via ratcheted up artifice (air conditioning, processed foods, etc.). The give and take is made stunningly clear.

There it is again: Artifice. Artifice in our own lives, and the notion of how artifice in the movies does and doesn't pacify, perpetuate or underline such things. What a rough-hewn effort like Beasts comments on via impressively modest means, an overblown display such as Les Misérables can only pose as. (Ten Beasts could probably be made with Anne Hathaway's Les Miz face-dirt budget.) In my previous Oscar Connections column, I stated that of the nine Best Picture contenders, this is the only one unworthy of a spot on the list. Tom Hooper, director of the terrifically winning The King's Speech, loses his sure handed touch that made that film so rich, and this time is in over his head, made to pull a massive ship he cannot bear. 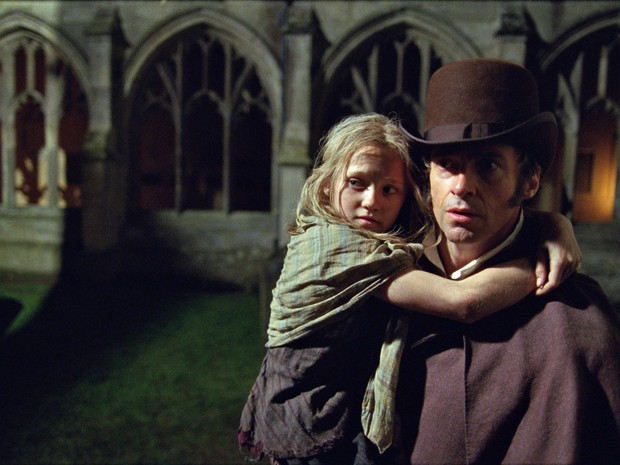 Tom Hooper's adaptation of the celebrated stage musical is one of the longest awaited adaptations to hit the screen, although it must be said that 2012 also yielded The Hobbit and On the Road, two in the transitional pipeline for considerably longer. Hooper's three-hour plus film boasts some impressive performances. Hugh Jackman positively owns this thing, and an on-and-gone Anne Hathaway redefines the idea of Best Supporting Actress.

Their singing throughout this operatic non-starter is not the biggest problem, although I do take suspicion with the ballyhooed notion that what we're hearing is PURELY the actors singing as they were filmed rather than any conventionally used lip-synch/voiceover/post-production magic. Maybe everyone really was singing day in and day out as they shot this, but honestly, there's little chance that's ever what we're hearing in any kind of unaltered presentation. This perpetual singing, however it was recorded (and really, does it matter??) is impressive in faint spurts, but more often than not is embarrassing, pedestrian, and even grating. Having never previously experienced the musical version of Victor Hugo's epic tale, I was taken aback by how utterly unmemorable so much of it is.

The accusation that Hooper doesn't know how to shoot the singing is more than valid, as he frequently resorts to "Glee"-like swooping camera moves and a mundane overabundance of medium shot framing. The musical lacks the scope it's begging for, and when scope is attempted, the improperly hyper-saturated digital falseness of it all undermines it completely.

Lots of people love this film, although upon further inspection, it turns out that they're generally responding to Hugo's story, or a single song performance amid the entire thing ("I Dreamed a Dream"). I'm not hearing a lot of comments about the quality of the visuals, the revolutionary message, the film's patriotism, or how taut the whole affair is. Musicals by their very nature are rife with artifice. This is not to say that they cannot be truthful, honest, or even real in their soft-shoe numbers and bombastic showstoppers. The genre's history, from Busby Berkeley to Arthur Freed to Bob Fosse, quite melodically tell us otherwise. The underlying problems with Les Miz lie not in it being a musical, but being a mediocre one. If it had been released, say, last March, we wouldn't be talking about it now.

Be sure to check back for the final installment of this series when I'll cover the remaining three Best Picture nominees, including my own pick for best film of last year.
Tweet Post Submit