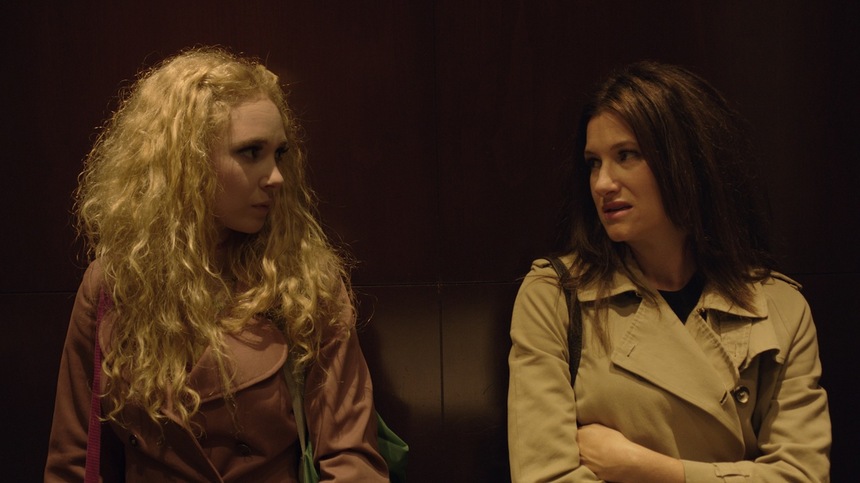 Poor Rachel (Kathryn Hahn). Although she's married to the man of her dreams, Jeff (Josh Radnor), leads a really nice lifestyle, and has a healthy son, she's bored as hell as a stay-at-home housewife. Her friends are starting to suck, because they all have day jobs and/or do normal mom things. And Jeff never wants to have sex. They high five in passing more often than they copulate, and Jeff even has an unspoken "no sex tonight" safe phrase when they're going to bed.

In an attempt to spice up their sex life, she, along with Jeff and some of their friends, go to a strip club. Here's where it gets, well, a bit odd. After getting a lap dance from a young stripper named McKenna (Juno Temple), Rachel's curiosity and boredom get the best of her, and she takes it upon herself to help McKenna out of her current unhealthy lifestyle. Things will go one of two ways: 1) Genius. 2) Stupidly bad.
Afternoon Delight explores the off-kilter world of Silver Lake, a highly hip neighborhood in Los Angeles, California, full of highly hip (and crazy) people. This will probably go unnoticed by folks who don't live in L.A., but it sure hits home for those of us who do. But don't worry, there's enough delightful entertainment packed into this movie, you don't need to be a native to enjoy. There is, however, one thing you should know about Los Angeles -- everyone here has a therapist. Even therapists have therapists.
Afternoon Delight is writer/director Jill Soloway's feature film debut, and she's brought together a lovely cast. Kathryn Hahn branded herself in small-but-memorable roles on TV and in films (Parks and Rec, Anchorman, Step Brothers), but she takes the lead as Rachel and knocks it out of the park. She's fierce, vulnerable, crazy, and courageous, all at the same time. Josh Radnor, who is better known as playing the hopeless romantic in long-running sitcom How I Met Your Mother, steps out of the norm in this film, but still manages to play a man with a gentle heart. Radnor is a very likable guy, and will always get a thumbs up from me for playing characters who wear their heart on their sleeve.
We also get a few scenes with the great Jane Lynch as Rachel's therapist, who mostly talks about her problems rather than listen to Rachel. Lynch is proof that a cinematic God exists. Without Lynch, sharp deadpan comedy with a splash of ignorance would not be as fun. Her presence is never a letdown. She makes every moment memorable in every movie she's in, and Afternoon Delight is no exception.
Juno Temple (Dirty Girl, Killer Joe, Kaboom) another raunchy performance. I can't remember the last time I've seen her in a movie with her clothes on. She's nice to look at, but she's also very talented, so it's great to see her as the not-so-much naked aloof-dame-in-distress for once. Temple differentiates this character by stripping away the adult dancer cliché and playing McKenna with a lot of heart. Temple makes this dirty girl lovable in an eerily fitting way.

What's especially delightful is that Soloway's confident direction maintains a steady balance between witty comedy and heavy drama. There are moments where you will laugh out loud, and there are moments where you will think to yourself, "better Rachel than me." And as cliché as it may be, that's life -- it's full of funny little moments, full of heartbreak and sadness, and full of love. Love, happiness, and finding peace take a little time. Afternoon Delight captures these feelings in the most sincere way possible.
(Follow Chase Whale on Twitter.)
Tweet Post Submit

Do you feel this content is inappropriate or infringes upon your rights? Click here to report it, or see our DMCA policy.
Jane LynchJill SolowayJosh RadnorJuno TempleKathryn HahnSundanceSundance 2013Sundance Film Festival