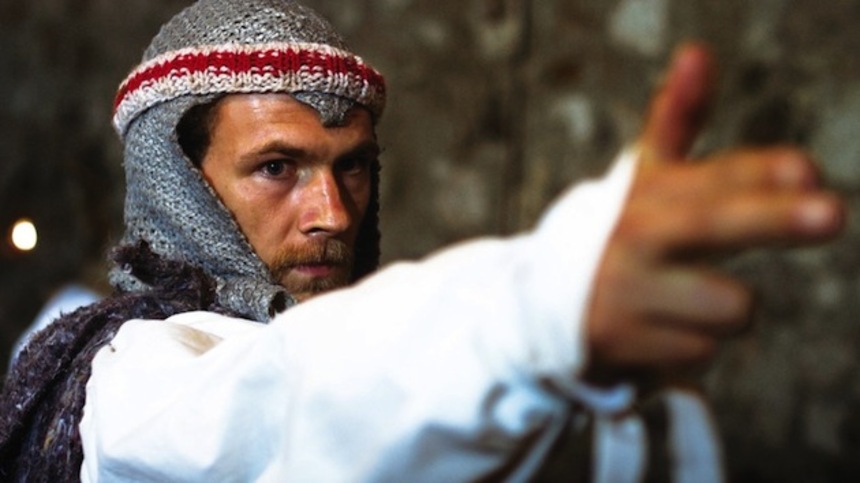 We all have visions that we hold dear, ideas and ideals that we keep close to our hearts, ready to share in that moment when we absolutely must go forth and claim our stake in the world. As German author Henirich von Kleist stated: "A free thinking man is not trapped where Destiny puts him."

Aron Lehmann's feature debut is and isn't an adaptation of Kleist's novel Kohlhaas. The best supporting example I can give of this is how Michael Winterbottom's Tristram Shandy: A Cock And Bull Story is and isn't an adaptation of Laurence Stern's 18th century meta novel. While Winterbottom's film is full of snark, focusing on the petty, excessive and narcissistic ailments  of the film industry, Lehmann's film, by turn, is a celebration of the human spirit, an equally comic and tragic tale of community, commitment and craft. At first we are watching two movies: One is the documentary about making Kohlhaas, the other, is the story of Kohlhaas the humble horse trader who, after experiencing the wrongs of a local lord, seeks justice in what is quickly revealed as an unjust world. Soon enough the line between each film fades away and we discover that while it may feel like we have been watching two movies, we have, in fact, been experiencing one, singular story.

Setting up shop in a small Bavarian village, Robert Gwisdek plays a film director also named Lehmann. He and his crew are making what they believe will be a great historical epic. The film is a few days into shooting when Lehmann gets the call that the producers have quit. There is no money, no props, no horses. But what Lehmann does have is his vision, his imagination, his steadfast crew and the support of the local village. Oh, and cows instead of horses. What more does one need to make a movie?

The line between what makes one a professional and one an amateur does not exist in Lehmann's mind. Authenticity of feeling and of the story trumps accuracy of the period. Be creative, set the mood. So what if the actor playing Kohlhaas (Jan Messutat) does not have a sword, he has his strength, and like the games we play as children, can draw a sword from thin air. In one moment when it seems all will be lost within the production, Lehmann takes his lead actors, the mayor and the locals into a field and makes them believe... believe that the enemy is on the offense, and it is now or never that they must defend. In a magnificent charge, Lehmann leads his men into a grove of trees, each one swinging an imaginary sword or shooting from an imaginary bow, yelling for blood, for justice, for their lives. Boris  Bojadzhiev's music swells, the sound effects of steel on steel clatter across the speakers, and here are these men bumbling through the grass, falling, fighting, committing to what looks like make believe, but that's just it... it is Make. Believe. However absurd, they are making it real.

What's so extraordinary to me about Kohlhaas is its sincerity and heart is not oversold. While the film is indeed hilarious, Aron Lehmann never undermines or makes fun of his subjects. The film's theme of belief in oneself in the face of utter destruction may not be anything new, but that's the wonderful thing. The story of Kohlhaas and Lehmann, fighting for what they believe in, is timeless and vital. It is the building blocks of our humanity and of our mythologies across the globe. If we just look at Kohlhaas as a comedy then it is one of the most gorgeously shot comedies in recent memory. Cinematographer Christian Pirjol captures the richness of the countryside in melancholic golds and misty blues, lensing the face of our dreamer, Lehmann, with hope. And when you have hope, you have the world. And if you can let go of hope, and just be in the moment, then you still have the world.

Aron Lehmann's vision is one of the truest, most deeply-felt, exceptionally unique and innovative I have seen in a long time. This kind of film is the reason why I go to festivals, the reason I do what I do, and the reason why I believe in the power of cinema. To. Make. Believe. Is. Everything.