Review: STAND UP GUYS Stands Up to Scrutiny 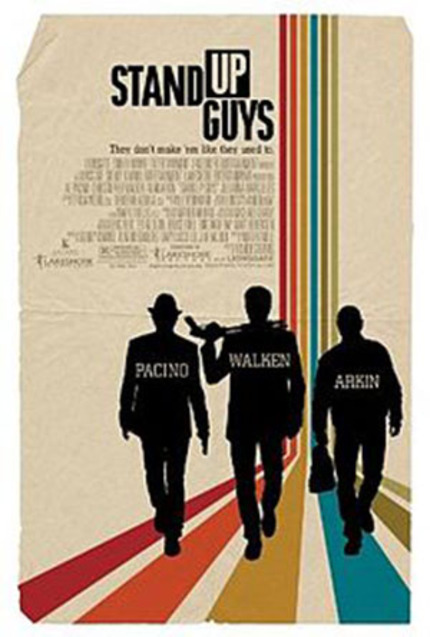 Put Al Pacino, Alan Arkin and Christopher Walken together on screen, and it's a laconic dream team. Each is so delightfully quirky and menacing in their own unique style that it's clear the film's greatest coup is casting. Stick these guys together in a car, let them kibbitz -- in a terse, concise manner, of course -- and you're halfway to a classic.

The first 40 minutes or so of Stand Up Guys plays out exactly as you'd expect, a kind of Cocoon for old gangsters, another toothless reunion film like 1986's Tough Guys. We see Pacino get released from jail in that gettin-out scene that always shows up in these films, and yet always manages to remind of The Blues Brothers, however seriously they're taking the proceedings. After an awkard hug between Walken and Pacino, the two men go off to reacquaint themselves with one another.

Soon they find themselves scratching certain itches that have accumulated after years in the joint, and we get the sort of rambling, silly, 'old guy making do in a modern world' thing that you might expect. They even spring Arkin, who's cooped up in a retirement home, and go on a rambunctious ride in a stolen car.

Inside the car, the tone begins to shift. Pacino drops his jokey manner, and we realize that he realizes the fix is in. There's a dark current under the mirth that's been there from the start, and it becomes apparent that the characters are smarter than they look. So is the film. From this point, through to the finale, the actions of the characters seem spot on, the bigger-than-life moments earned.

It's a great magic act, one pulled off due to a fine cast and assured direction by Fisher Stevens. Stevens is probably best known for playing the character Ben Jabituya/Jahveri in brownface for the Short Circuit films, but since then he's been in a slew of TV productions, as well as directing or producing a number of fine documentaries.

Alas, there are those who might not stick it out until this little switch happens, pulled out of the film from the outset. This would be too bad, and Stand Up Guys provides an excellent example of how one often needs to stick with a work despite initial reservations, never judging something less than the whole. I left the screening having thoroughly enjoyed my time with these guys, finding solace that even the most telegraphed moments were done so in a deliberate way.

All three of the stars have been in terrible films in the past, but also have put in some of the finest moments ever seen on screen. What's great about this film is that, in a very unshowy manner, you've got actors who appear completely at ease with their characters, totally convincing without much bombast or charade. We're not talking Oscar-caliber performances from these Oscar-winners, but it's a much better film than it might appear to be on first blush.

Kudos to both the ensemble and Stevens for crafting something fun and unique out of a pretty tired concept. Stand Up Guys certainly stands up to scrutiny, and proves to be a enjoyable time spent with some A+ caliber guys doing their thing on screen.

More about Stand Up Guys