Euro Beat: France In Uproar Over Gérard Depardieu and Actors in General 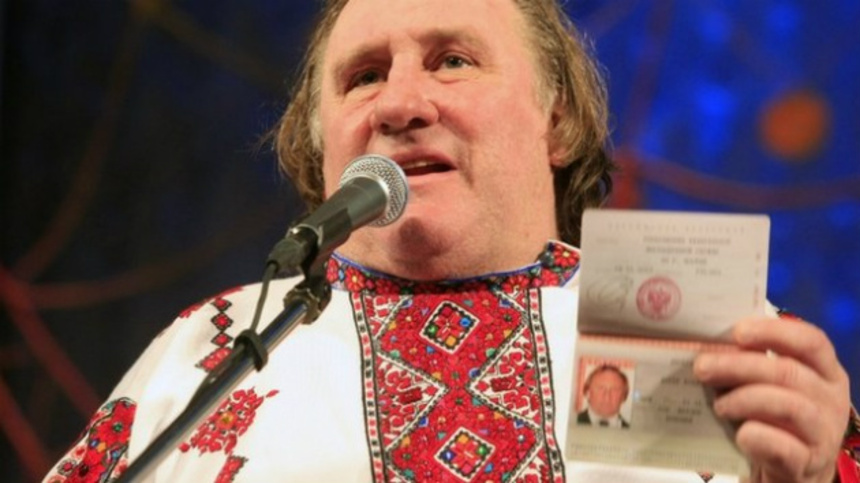 French stars are under attack! First the president François Holland promised to instate a 75% tax on salaries over a million euros, which is almost solely aimed at famous entertainers, and now a big player within the industry is arguing that their salaries should be capped at 400,000 euros per film. Which would, ironically, solve that tax problem. Partly in response to this, and perhaps partly because he really has nothing left to prove, Gerard Depardieu threatened to renounce his French citizenship and live in Belgium, where taxes are lower.

A quick aside on that tax law: While the French parliament rejected it, but the government is now drafting a new version of it to submit this Fall. Even Holland has admitted that it's mostly a symbolic law.

Anyway, then things got wacky. Vladimir Putin invited Depardieu to become a Russian citizen and take advantage of their flat 14% income tax. Depardieu then wrote an open letter to Russia saying, among other things, "I love your country...  your culture, your intelligence." He then called Russia "A great democracy, and not a country where the prime minister calls one of its citizens shabby." Days later, Depardieu collected his new Russian passport from Putin personally, then showed it off while dressed in the folk garb of the picture above.

Given that he was the poster boy for French cinema for so many years, France was a bit distraught over this whole ordeal. Most recently though, Depardieu has said that he will not revoke his French citizenship and will likely live as a dual citizen of France and Belgium, and that if he wanted to escape French taxes, he would have done so long ago like others in the French entertainment industry.

But Maybe All Stars Are Paid Too Much!

Sometime after the controversy started and before Depardieu received his passport, Vincent Maraval, co-founder of the huge French sales and distribution outfit Wild Bunch, entered the fray. In an editorial penned for Le Monde under the headline "French Actors are Paid too Much," Maraval takes the country to task for obsessing over Depardieu rather than addressing the bigger systemic problems in France's film finance system. He even makes a fairly compelling defense for Depardieu, pointing out that he acted in Mammuth for free just so that the film could be made, and that he offered to do the same for Abel Ferrara's upcoming Dominique Strauss-Kahn biopic.

According to the system in question (which is messy, so forgive the oversimplification), films are normally financed with a combination of money from a public organization called the CNC and France television stations, which pay for rights to show the films after their theatrical run. The part that uses tax payer money is referred to as the "cultural exception," that is, a way for France to continue its rich cinema tradition without giving into the whims of the market.

The problem? According to Maraval, because of absurd actor salaries, French films cost too much and are not at all profitable. Statistics for this year back him up, since according to the newspaper Liberation, only 14% of all French films made a profit this year. In the article, Maraval demands (paraphrasing here -- I'm not a professional translator), "Why are there so few new voices in French Cinema? Because there's nothing new under the sun? Because Alain Delon, Johnny Hallyday and others have stayed in the acting game too long? Or because Danny Boon (Welcome to the Sticks, other middle-brow French comedies)... got paid 3.5 million euros for The Perfect Plan, the total box office gross of which won't even pay his salary?"

So yep, according to Maraval, it's the actors. And the system, which, because of public funding, allows so many financial failures. In order to cover themselves for these failures, producers try to hire bankable French stars so that they can sell the rights to television for more money. And because of the latter demand, French stars are paid exorbitant salaries. Maraval makes several comparisons, like the fact that Vincent Cassal was paid 226,000 euros for The Black Swan, which grossed over 200 million euros worldwide, while he was paid $1.5 million euros for the French film Mesrine, which made about a tenth of that. Or the fact that, according to him, French populist director Philipp Lioret makes twice as much as Steven Soderbergh and seven times more than James Gray and Darren Aronofsky.

He gets more into the in's and out's of film finance, and finally proposes a solution: cap actors' salaries at 400,000 euros, and in true auteur spirit, at a slightly higher rate for directors. The article caused debate across the spectrum in France, with everyone actors to Newspapers to the Cinematheque Français chiming in about the strengths and weaknesses of Maraval's argument.

Boon and Lioret both issued angry responses, saying that Maraval got his numbers wrong and completely misrepresented their salaries. I'm not sure who wins that war of numbers, but it's true that most of Maravel's comparisions are between the norm for France and the exception in the US. For example, he talks about The Black Swan as if it was totally expected to gross over $200 million when in fact, it was a huge surprise for everyone. He also compares French actor salaries to that of Benecio Del Torro in Che, which was clearly a passion project where all involved took a hit. At the same time, Lioret's assertion in his rebuttal that he spends an entire year researching the subject of his movies before getting paid for the script seems a bit disingenuous as well.

Still, the fact remains that public money is being poured into an industry which produced an unprofitable product 86% of the time this year. If this entire 86% was on the quality level of, say, Holy Motors or even Farewell to the Queen, then maybe there'd be less protest. But that brings me to the elephant in the room, which Maraval hints at when he compares Philipp Lioret to James Gray, but never really directly says: The nouvelle vague has been finished for a long time, and these days, most movies that France produces in a given year using public money are mediocre and forgettable at best.

Since this entire column has been about money, I'll be brief: Finland, France, Greece, Iceland, Norway, Spain, Sweden, UK, Germany and Italy finally, really and truly, united over something: The Hobbit: An Unexpected Journey. The film reigned in pretty much every European territory. In Spain, The Body has been doing fairly well, having pulled in a total of $3.8 million, and in Finland, the nicely-titled Gloriously Wasted took the number two spot with close to half a million dollars. Also, France's answer to 80's American buddy cop comedies, The Other Side of the Periphery, has done well by locally produced standards with a total of around $10 million. But really, The Hobbit destroyed everything.

Do you feel this content is inappropriate or infringes upon your rights? Click here to report it, or see our DMCA policy.
Euro BeatEuropean Film NewsFrench FilmFrench Film FinancingGerard DepardieuVincent CasselVincent Maraval