Opening: DJANGO UNCHAINED, in a Time of Blood, Awards, and Massacres 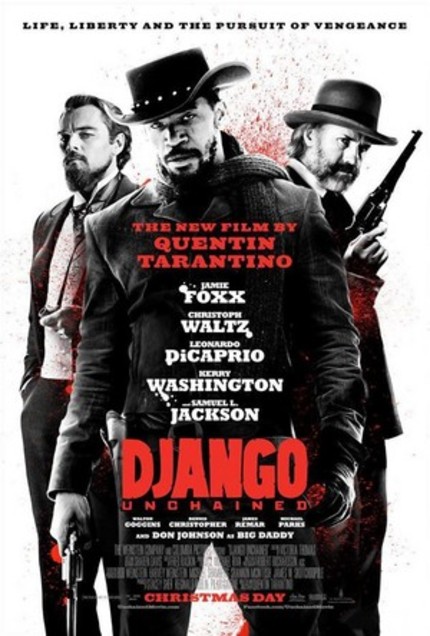 Soon after Quentin Tarantino's Django Unchained began screening for critics and industry members, a man made his way into a school in Newtown, Connecticut, shot and killed 20 children and six adults, and then killed himself. The massacre ignited yet another national debate on gun control, with further fuel added to the fire by a spokesman for the National Rife Association, who assigned blame to violent films and video games, among other things; he described violent movies as "the filthiest form of pornography."

And now comes the bloodiest movie of the season, opening on Christmas.

Eric D. Snider, one of our featured critics, wrote an excellent review, providing balance and perspective on the film. In his opening paragraph, he observed:


The godfather of modern gonzo filmmaking addresses American slavery and race relations the same way he has addressed other sensitive issues: by making a boisterously entertaining movie that couldn't be less interested in sensitivity. He's in it for the fun. If his amusing story about a resourceful ex-slave seeking vengeance against his tormenters happens to convey a message about the absurd moral wrongness of racism and slavery, well, that's cool. But the main thing is to have fun.

Eric addressed the conflicting feelings that arise when watching the director's work:


To enjoy a Tarantino film is to enjoy feeling a little dirty now and then. His condemnation of slavery and racism is unequivocal here -- probably so much so that certain insecure types will find the movie guilty of being anti-white -- but he clearly enjoys rolling around in the filth of it. To see two men compelled to fight until one of them is too broken to continue is disgusting ... yet we have to admit, the fight itself is kind of cool. The same goes for Tarantino's fondness for realistic (perhaps even exaggerated) violence, emphasizing how bloody and painful bullet wounds are (and there are a lot of bullet wounds in this movie). On the one hand, it's more accurate than traditional Westerns are. On the other hand, you kind of just like watching people bleed, don't you, QT? As do we all.


If the slightly rambling Django Unchained is "lesser Tarantino" -- you know, only a B instead of an A -- it's still a heady, delirious good time. ... I'll take a misshapen but audacious effort like this over a timid one any day.

As for the timing of the film's release on Christmas, Tarantino has acknowledged that awards consideration played into the decision. If nothing else, it provides counter-programming, and the early portions of the film represent Tarantino at his most baldly comic, which makes for a refreshing contrast from other awards-seeking contenders.

The Newtown massacre was a terrible tragedy, but it is, to my mind, a completely separate issue from whether Quentin Tarantino's movie deserves to be seen. His use of blood and violence may be exploitative, yet it fits with his body of work, which is all about borrowing liberally from others and then endeavoring to make it his own.

Tarantino has always been rambling and excessive; in the past, he was reined in to a certain degree by his longtime trusted editor Sally Menke. With her untimely death last year, Django Unchained represents Tarantino at his purest and most personal, however raggedly imperfect that may be. It's wild entertainment that still manages to provoke thought, and if it leads to further debate, so much the better.

Do you feel this content is inappropriate or infringes upon your rights? Click here to report it, or see our DMCA policy.
Christoph WaltzJamie FoxxQuentin TarantinoLeonardo DiCaprioKerry WashingtonDramaWestern