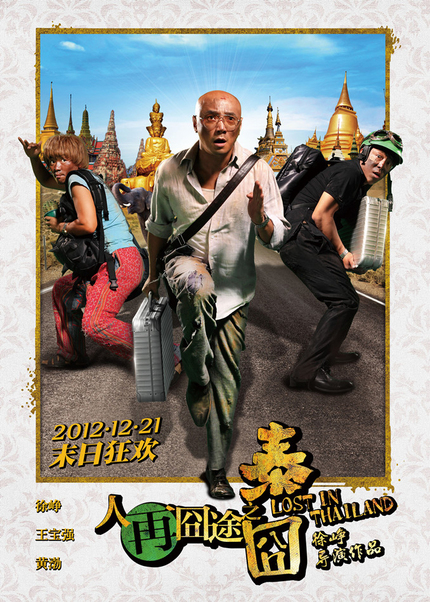 Writer / director / star / producer Xu Zheng has just set the bar phenomenally high for himself, absolutely shattering a literal handful of Chinese box office records with his debut directorial effort Lost In Thailand. Best known to fans in the west for his roles in Ning Hao's Crazy Stone and Crazy Racer and Pang Ho Cheung's Love In The Buff the wild success of Lost In Thailand has easily eclipsed any of those films and established Xu as a legitimate force in his own right.

Lost in Thailand is the story of two rival business managers, Xu (Xu Zheng) and Bo (Huang Bo), who are fighting over a revolutionary new in-house technology for control of their company. If Xu wins, his future will be secured. The critical task is to secure control over the shares of the chairman, who is at a retreat in Thailand. Xu catches the first plane to Bangkok, where he meets the happy-go-lucky Wang (Wang Baoqiang), an unexpected travel companion who will open his eyes to life's true priorities.

Since opening December 12th, Lost In Thailand has broken five Chinese box office records including the biggest December opening day ever ($6.25 million US), the biggest Wednesday opening ever, highest number of daily screenings for a mainland Chinese film ever (33k screenings on December 15th as exhibitors adding showings to meet demand), and the highest single day take ever (2.78 million admissions on December 15 for a take of $14.9 million US, topping previous records held by Painted Skin 2, Titanic 3D and Transformers 3).

Twitch is happy to share the English subtitled trailer for the Xu Zheng phenomenon, check it out below.

More about Lost In Thailand