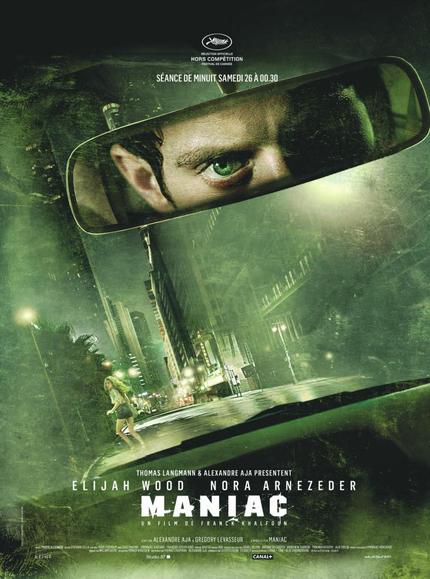 Are you ready for Elijah Wood, serial killer? We've had images and trailer for the Franck Khalfoun directed remake of Maniac - with the former Frodo in the titular role - but now the powers that be are going one better, releasing the first six minutes of the film, a block that includes the picture's first kill.

Just when the streets seemed safe, a serial killer with a fetish for scalps is back and on the hunt.

Frank is the withdrawn owner of a mannequin store, but his life changes when young artist Anna appears asking for his help with her new exhibition. As their friendship develops and Frank's obsession escalates, it becomes clear that she has unleashed a long-repressed compulsion to stalk and kill.

A 21st century Jack the Ripper set in present-day LA, MANIAC is a re-boot of the cult film considered by many to be the most suspenseful slasher movie ever made - an intimate, visually daring, psychologically complex and profoundly horrific trip into the downward spiralling nightmare of a killer and his victims.

Make no mistake about it, this is dark and nasty stuff. Check it out below.

Do you feel this content is inappropriate or infringes upon your rights? Click here to report it, or see our DMCA policy.
alex ajaelijah woodfranck khalfounhorrormaniac

wow looking good! Can't wait till this comes out.

It's kind of funny to see the WB logo in something so disturbing.

I cannot find any information on the opening date for this film. It's like the producers are begging people to bootleg it. Horrible marketing.

Its coming out in 2013, not sure if they have a US distributor or not.

U.S. distribution is IFC Midnight, I heard it is going to be released in March. I hope it's sooner ;)

Looks like the One Ring really fucked him up.

Just saw it, for some reasons, we get an eralier release in Germany :)

Awesome soundtrack, great camera, but the movie itself is at times ridiculously illogical and the second half gets a bit boring and tends to drag on a bit. But the ending itself is great, Elijah plays a great psycho and the violence is comfortingly raw. Overall recommended.

Excellent film I saw at Cannes, with the
team just invited to be involved in visual film, using pictures of models I
realized (http://davidlaw.fr/). The careful plunges us into the world through
the eyes of the killer, mannequins are ubiquitous, visual stifling. It is
efficient and beautiful, this is what struck me the aesthetics of the image
outside the norm, in reflections and mirrors ... I agree and I love it.

Interview for Maniac for Allo Ciné!

The Interview for Maniac for Eklecty
City