Blu-ray Review: GRAVE OF THE FIREFLIES (Sentai Filmworks) Transcends Its Methods, Becomes Its Own History 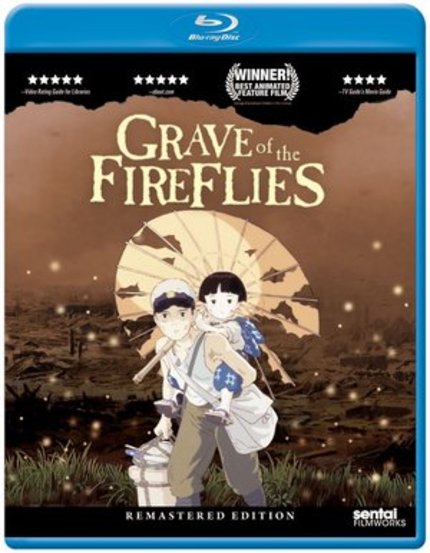 On November 20th, Sentai Filmworks brings Isao Takahata's masterpiece, Grave of the Fireflies to Blu-ray for the first time in the US. The film was previously released in Japan to great acclaim among fans of HD anime, and this release actually marks the first vintage Ghibli production to appear on US shores before its UK counterpart, largely due to the fact that Fireflies is one of the only Ghibli titles not owned by the Disney company. Fortunately, this disc, sporting a svelte $17 price tag these days on Amazon, compares extremely favorably with the Japanese import disc which hovers around $65 right now. If that's not reason enough to purchase this version instead of the Japanese disc, read on...

Our own Niels Matthijs took a detailed look at the film in his Personal Favorites series, and was right on the money when he explained this,

Hotaru no Haka [Grave of the Fireflies] is one of the best anti-war movies out there, even though there's hardly a glimpse of all the fighting involved. Instead it focuses on the people who are left behind, families torn apart and children turned orphans. There are some agonizing scenes hidden away in this film so it's probably best to avoid showing this to very young children, but anyone else should take the time to sit down and watch this. It's not the ideal film for a fun evening on the couch, but it reaches well beyond the boundaries of traditional animation films and delivers an experience you'll be hard-pressed to find anywhere else.

If anything, Niels understates the brilliance of Takahata's work with Grave of the Fireflies. This film is one of the finest humanist piece of art ever created, and I'm not usually the type who is prone to hyperbole. Japan has a messy history with war and wartime, and the fact that they've been able to look back on their own history with some insight is impressive, especially considering some of the horrible acts committed in the name of the Emperor. If one were to compare this film to the other major animated work based around WWII, Barefoot Gen, it becomes even more obvious what a delicate hand Takahata was able to wield with Grave of the Fireflies.

Perhaps the most impressive part of the whole film is that Takahata avoids demonizing anyone wholesale as many films of this type are prone to do. In this case our hero, Seita, is fighting for his own survival and that of his sister, but they aren't necessarily fighting against any external enemy, they are only trying to keep up their own spirits as he attempts to comfort his dying sister through her diminishing health. Think of it as a classier and less obvious version of Life is Beautiful. Rather than a hammy Roberto Benigni, we have a gentle, concerned brother attempting to shelter his young sister from the ravages of war and the spirit of selfishness that followed the surrender when Japan was effectively crushed by the Allied powers. At no point in the film are we really expected to hate anyone; the Americans aren't the enemies, the Japanese aren't' the enemies, there really are no enemies, only people trying to make the best of what they have.

Grave of the Fireflies must be seen, don't prejudge it because it is animated, simply let go and allow your heart to feel. You will not remain untouched.

Grave of the Fireflies comes to us on Blu-ray from Sentai Filmworks in an incredibly good looking edition that far exceeds my expectations. I had never seen any films from Sentai, so my hopes were moderate, but having seen the finished product, it favorably compares with any Disney Ghibli offering we've seen so far. The detail in the animation is astounding, even to the point where fine line art is easily discernible and sometimes you can even see when one animation cel slides under another, something I've never seen on DVD. There is some visible film grain, but it isn't overpowering, and for those of you who are a fan of that sort of thing, you shouldn't be disappointed. As usual, Ghibli's gorgeous matte paintings really shine in HD, and there were a couple of instances in which I was stunned to see images that were so well rendered that I thought they were photos for a second before shaking it off and remembering what I was seeing. Really amazing stuff. For image captures and comparisons to the Japanese disc, you can visit DVDBeaver at the link below (I'm working on doing screencaps from my computer, but I'm not quite there yet).

The audio is another area in which Sentai Filmworks' presentation excels. In addition to the classic Japanese audio track, we are given two English audio dub tracks. One is a vintage track for which the materials are moderately damaged, and the second is a brand new dub, created by Sentai Filmworks, which sounds excellent and is really a worthwhile addition. I know that many of you out there are not fans of English dubs, but I think it is acceptable for animation, and this track, devoid of Disney music superstars and celebrity actors rather than voice actors, is a fine addition to the Grave of the Fireflies legacy.

In the extras department, what we get here is a bit thinner than those of the Disney Ghibli discs, but still worthwhile. There is the customary feature length storyboard comparison which has become something we expect with all Ghibli special editions. There are also two deleted scenes in story-board/animatic style, so if your heart hasn't been ripped from your chest by the closing credits, you can finish the job with these little pieces. Lastly we get a couple of trailers for the film, which emphasize its odd pairing with Hiyao Miyazaki's My Neighbor Totoro at theater, what traumatized children those must've been.

In closing, Grave of the Fireflies from Sentai Filmworks is a must own disc, and at $17, it's a bargain. Highly recommended!