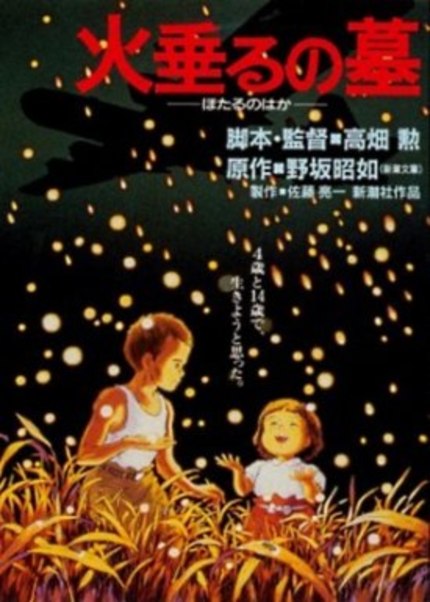 Hotaru no Haka (Grave of the Fireflies) is a very depressing film. So much in fact that Ghibli made an entirely new film (Tonari no Totoro) to cushion the blow upon its release. They even packaged it as a double bill to make sure people walked out of the theater with a smile rather than a tear. Your mileage may vary of course but I think that Ghibli definitely had a point there, so beware when you sit down in the hope of enjoying an nice evening of cinematic escapism.

I honestly believe that Hotaru no Haka is one of the most important anime films ever produced. Sure enough, films like Akira and Kokaku Kidotai made anime popular in the West, but those films catered to a very specific (techy/nerdy) niche. Hotaru no Haka definitely transcended the niche market and rose up to become the anime fan's ultimate defense against popular criticism that anime is only for kids/geeks/whatever other minority group. With a little help from film critic Roger Ebert the film reached out to an audience that didn't care for animation and in that way it helped to broaden the mind of many film fans out there.

Isao Takahata (co-founder of Ghibli) has always worked in the shadow of Miyazaki, which is a shame because I think he's definitely the better director of the two. More versatile, less moralistic and always able to lend his films a remarkable humanistic and natural touch. Together with Okiura's Jin-Ro Takahata's films are probably the only ones that qualify as truly mature cinematic works.

Hotaru no Haka is an adaptation of a semi-autobiographical novel by Akiyuki Nosaka, going by the same name. The film follows Seita and Setsuko, two war orphans who are left in the care of their aunt. But times are harsh and as the two contribute little or nothing to the family they are somewhat ignored. Too proud to submit to the unequal treatment Seita and Setsuko take off on their own, confident in their chances of survival.

The artstyle betrays the film's age. It's definitely starting to look a bit outdated, but the quality of the animation is so staggeringly beautiful that it's hardly an issue. It's not so much the frame rate that awes, but the subtle details that nail some of the character's movements. The way Setsuko moves when she takes out her small wallet, the way she behaves when she feels something is wrong without knowing exactly what is going on. This is definitely Takahata at his very best.

The music is beautiful, striking a chord even outside the context of the film. Whenever I hear the theme song I get a little tingly, as it accompanies some of the more emotional scenes in this film. Maybe Takahata could've used the soundtrack a bit more sparingly throughout, the music isn't always as subtle as it could've been either, but the result is captivating and underlines the emotional moments of the film.

I actually watched part of this film in English once, I advise you never to do the same. The Japanese actors are way better, putting more love and emotion into their characters. Especially the voice of Setsuko is spot on, little girl lisp and everything. The English track is a lot harsher and gives off a very cold and unpleasant vibe, so be sure to stay clear of it.

If you look around you'll find some comments of people who consider the film over-sentimental. While in fact there are some very depressing scenes, accompanied by sad music and aimed to crush the heart of the audience, there is also a darker and harsher undercurrent of self-critique that sets it apart from typical tearjerkers. The writer of the novel is actually present in the form of Seiko, who is directly responsible for the demise of Setsuko. His pride and inability to cope with the treatment they get from their aunt (which, considering the situation they were in, wasn't exactly strange) is exactly the reason why things turned out the way they did. Nosaka atones for his childhood sins through the novel, his fictional destiny being the best indication of his own feelings of guilt. Takahata does a very good job transferring those feelings into the film, though many people still seem to miss that aspect of Hotaru no Haka.

Hotaru no Haka is one of the best anti-war movies out there, even though there's hardly a glimpse of all the fighting involved. Instead it focuses on the people who are left behind, families torn apart and children turned orphans. There are some agonizing scenes hidden away in this film so it's probably best to avoid showing this to very young children, but anyone else should take the time to sit down and watch this. It's not the ideal film for a fun evening on the couch, but it reaches well beyond the boundaries of traditional animation films and delivers an experience you'll be hard-pressed to find anywhere else.