NYFF 2012 Review: FINAL CUT - LADIES AND GENTLEMEN Might Be The Greatest Film About Film Ever Made 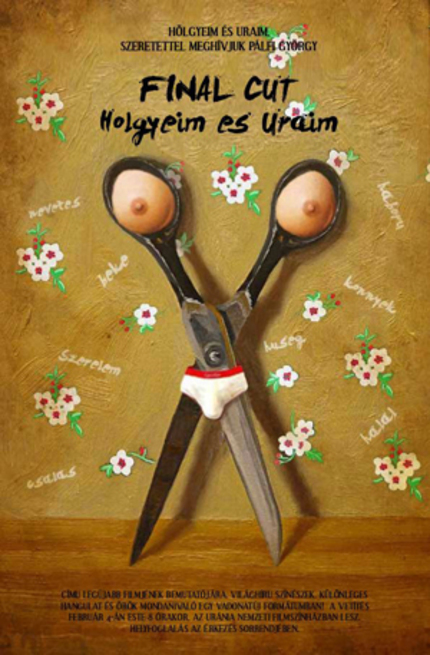 Gyorgy Palfi's Final Cut - Ladies and Gentlemen might be the greatest film about film ever made. Hyperbolic quote baiting? I assure you, I'm being sincere. It's not often I see a film that I'm impelled to gush about, let alone compelled to. But before I do, let me put my finger in the dike and make sure you are properly informed. Then, you can seek out this gem of a film and decide you love it for yourself.

I've been a lifelong Palfi fan ever since I saw Taxidermia at the Tribeca Film Festival in 2007. After that it was the understated murder mystery Hukkle on DVD. Then finally, I Am Not Your Friend, which has never been released this side of anywhere civilized, by nefarious means. Why would I throw that out there? Because I don't think Palfi would begrudge my needing to see his art by any means necessary. But more on that later.

In the last few years, it has been very difficult to get films made in Palfi's native Hungary. The State cut funding and Hollywood producer Andrew G. Vajna was put in charge of overhauling the existing system. Hungarian filmmakers like Palfi and Bela Tarr were concerned this would lead to less variety in Hungarian film, and took part in a protest against the dismantling of the old, democratic system. For a while there, there was no money available to Hungarian filmmakers at all. Since Palfi couldn't raise the money to make his own movie, he decided to make a movie using other people's movies instead.

Final Cut - Ladies and Gentlemen is a compilation film scavenged from over 100 years of cinema. Palfi refers to it as a "recycled." It uses carefully edited bits and pieces from almost 500 films and their scores to tell the quintessential cinematic story: the love story. Boy meets girl, boy loses girl, boy wins girl back, they live happily ever after. ScreenAnarchy's own Peter Gutierrez felt Palfi could have done something more interesting story-wise, but I feel the technical complexity of the experiment only benefits from the simplicity of the narrative. Wasn't one of the first films ever made Thomas Edison's The Kiss? That is cinema right there. Cinema is romance. Not only romance in the amorous sense, but romance as in fanciful or idealistic. Adventurous. And in that respect, Final Cut might be the most romantic film ever made as well.

Final Cut is the first film in forever that has elicited such wonderment in this jaded cineaste. It thrilled me to see many of my favorite films and filmmakers represented: David Lynch, Stanley Kubrick, Casablanca, The Big Lebowski, Akira Kurosawa, Ingmar Bergman, Star Wars, Back to the Future. But it goes beyond the perceived gimmick of the film's composition-- the "name that film" trivia of it all, which in itself is worth your time and brings endless re-watch value. It goes beyond the meticulous technical craft that goes into putting together a scene in which a musical number from Gilda is performed by multiple actresses from a variety of films, the clips edited so it appears they are all singing along to the same song. Final Cut is the embodiment of 100 years of escapist magic, emotional manipulation, and high art. Final Cut is film itself.

But unless you catch it at a festival, you might never get to see it. You see, Palfi didn't get clearance to use all these clips; he just did. And from the quality of some of the clips, it looks as if they were culled by any means necessary (which is why I don't think he'd frown upon my method of "acquiring" I Am Not Your Friend. He even goes as far as thanking isohunt.com in the credits). Distribution entity Wild Bunch has come aboard to help him with the rights, but you never know how something like this will play out. James Cameron, whose blockbuster Avatar is the first film featured, might be all, "It doesn't matter that my movie made 72 trillion dollars. Palfi has to PAY." So if you get a chance to see it, FUCKING SEE IT. If I were Palfi, and Wild Bunch didn't come through, I would just upload the thing to the internet and give it to the people. I don't normally go in for that sort of socialist hippie nonsense, but I feel it is in the spirit of how the film was made.

But I hope they are successful. I need this film on Blu-ray (although nothing will match seeing it in a theater), and I would gladly put money in Palfi's pocket so he can make more amazing films. The man hasn't repeated himself once, and if you watch the below video he mentions a number of projects he has in the wings, from big budget adventure/romance to Hungarian folk epic to low budget sci-fi. I want to see them all. Somebody, somewhere-- GIVE THIS MAN SOME MONEY.