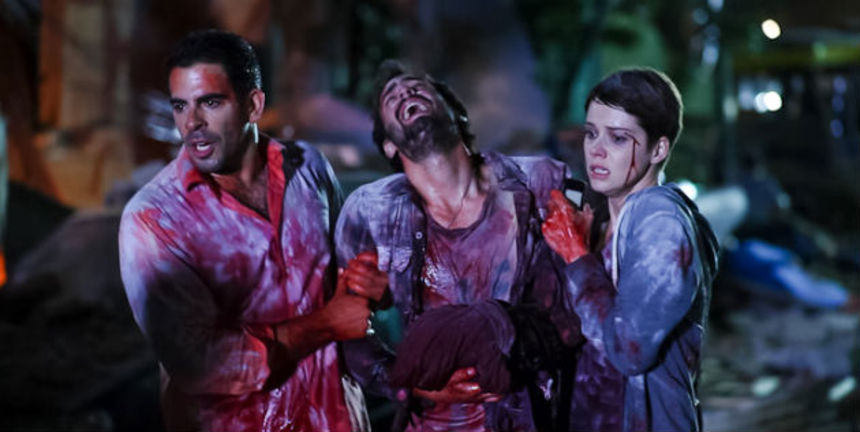 Playing in the Midnight Madness section to a ravenous audience expecting thrills every reel, the fact that Aftershock takes its sweet-ass time to get going feels like a bold move indeed.

At the outset, it appears to be another placid film about how cool it is to go clubbing in Chile. We see wine tours with tourists, eager or not, sipping away at a Cabernet, feigning interest in winespeak. We attend throbbing outdoor festivals, with DJs spinning away and drugged out, barely-clothed throngs dancing away to an incessant beat. We're even taken into an exclusive club, where the likes of Selena Gomez shows up, only to smack down the advances of one of our leads, none other than Midnight Madness stalwart Eli Roth.

This prelude should be deadly boring past the witching hour, but it proves to be one of the more effective points of the work - we genuinely do get to know these characters, the half sisters with their conflicts over drinking, the Russian woman with a daughter, the nebbishy "Gringo" played by Roth who looks downright foolish trying to fit in with a club culture that he clearly should have grown out of by now.

Roth is joined by Ariel Levy and Nicolás Martínez, forming a kind of mustekeer trio that seems quite genuine, the banter back and forth certainly typical of such kibitzing that occurs between friends. Just when we finally settle into the dynamic, when we're really getting to know these characters and their sometimes petty problems, it hits.

Like the prologue, this could easily have been a silly and jarring transition, but from this point in the film onwards director Nicolás López does a remarkable thing in sustaining a rapidity of pace and genuine sense of doom that elevates the project from many pitfalls that could have befallen it. Essentially, the lives of our characters change immediately; past grudges and concerns are forgotten about, saving tedious recollections and avoiding hesitations. The only motivation from this point forward is to survive.

To the credit of screenwriters López, Roth, and Guillermo Amodeo, the characters do not become suddenly, or at least unconvincingly, heroic. Stupid decisions are made, but not simply because the plot demands that they metaphorically go to the basement to check out the scary noise. The film's strongest asset is its ability to tie the resulting moments of horror to the milieu of a post-disaster environment, while cleverly using the tools generated by the chaos of the situation.

With the name Eli Roth attached to the project, love him or hate him, you'd be foolish to expect that when things do go bad for our characters they don't go really, really bad. This is certainly a "rape-y" film, a device far overused for shock value, often to truly tasteless results. The fact that the film comes close to providing a plausible context for such brutal assaults is again testament to the fact that the filmmakers have created a sufficiently detailed world to set their miserable affairs within.

Aftershock is the result of a 70s disaster film being ravaged in some concrete-strewn back alley by the torture-porn genre that Roth helped popularize. We perhaps need a new name for such a flick, something that conveys the Disaster Movie silliness with the violence and dread brought out by extended scenes of suffering.

It's clear once the ball gets rolling that the filmmakers are not afraid to go truly macabre and miserable, yet still manage to thrown in a few twists that makes the inevitable descent into horror  extremely entertaining. The film shows the hallmarks of a mature genre filmmaker, as it is well shot, with good ensemble acting and a well paced narrative. López and crew have taken a premise that should really be quite preposterous and produced an entertaining and nicely-assembled piece.

Certain to generate a slew of lesser imitators, Aftershock manages to shake free from expectations of banality, creating an extremely effective, unsettling experience.