THIS BOOK IS FULL OF SPIDERS: Seriously, Dude, Don't Touch It!!! 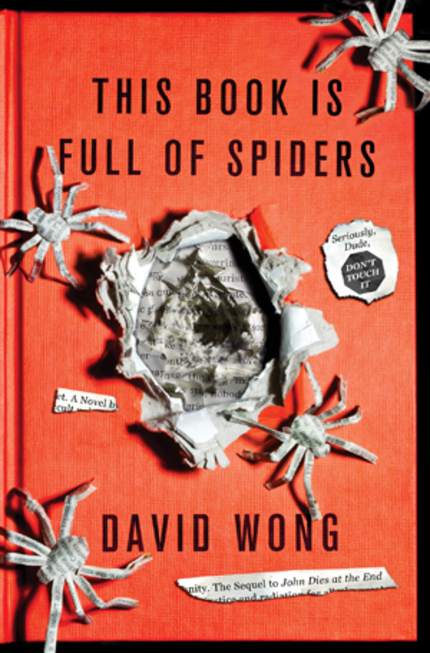 Waitaminute! A trailer for a book? When that trailer is for the book sequel to David Wong's breakout cult hit John Dies at the End? Oh, hell. And yes. While reactions to the film adaptation of Wong's book have been mixed, there is no denying that the source material is cracking stuff. We want this book. Now.

As the sequel opens, we find our heroes, David and John, again embroiled in a series of horrifying yet mind-bogglingly ridiculous events caused primarily by their own gross incompetence. The guys find that books and movies about zombies may have triggered a zombie apocalypse, despite a complete lack of zombies in the world. As they race against the clock to protect humanity from its own paranoia, they must ask themselves, who are the real monsters? Actually, that would be the shape-shifting horrors secretly taking over the world behind the scenes that, in the end, make John and Dave kind of wish it had been zombies after all.

You know you want this book. Now. Need more convincing? How about an excerpt from the book?

"I'm not crazy," I said, crazily, to my court-appointed therapist.

He seemed bored with our session. That actually made me want to act crazy, to impress him. Maybe that was his tactic. I thought, maybe I should tell him I'm the only person on Earth who has seen his entire skeleton.

Or, I could make something up instead. The therapist, whose name I had already forgotten, said, "You believe your role here is to convince me you're not crazy?"

"You don't think you need the sessions."

"I understand why the judge ordered it. I mean it's better than jail."

He nodded. I guess that was my cue to keep talking. Man, psychiatry seems like a pretty easy job. I said, "A couple months ago I shot a pizza delivery guy with a crossbow. I was drunk."

Pause. Nothing from the doctor. He was in his fifties, but looked like he could still take me in a game of basketball, even though I was half his age. His gray hair was cut like a 1990's era George Clooney. Type of guy whose life had gone exactly as he'd expected it. I bet he'd never shot a delivery guy with a crossbow even once.

I said, "Okay, I wasn't drunk. I'd only had one beer. I thought the guy was threatening me and my girlfriend Amy. It was a misunderstanding."

"He said you accused him of being a monster."

"The neighbors heard you shout to him, and I'm quoting from the police report, 'Go back to Hell you unholy abomination, and tell Korrok I have a lot more arrows where that came from.'"

"So you do believe in monsters."

Now you want this book. Go my children. Buy this book!