Today, Monster Pictures announced a new UK dual-format steelbook Blu-ray/DVD release of Tom Six's controversial body horror film The Human Centipede (First Sequence) together with its reprehensible sequel The Human Centipede 2 (Full Sequence) in time for Hallowe'en. The four-disc limited edition set will include a bounty of features for both films, including exclusive new interviews with the cast and crew of the second film, and is set to hit shelves on 29th October.

However, even more interesting for fans of the series was the news contained in the press release about the series' third as-yet-unfilmed installment. Ilona Six, producer of the films and sister of writer/director Tom Six, is quoted confirming a number of details about the production of The Human Centipede 3:

"For all you fans of the Centipede Sequence Series, Principal photography on Human Centipede 3 will take place in the Southern states of the U.S and Writer-director Tom Six himself will play a supporting role in the film. The American finale will be 100% politically incorrect and will answer questions left lingering from the first films. The Human Centipede 3 will have a 500+ person pede. XXXXL American style!" 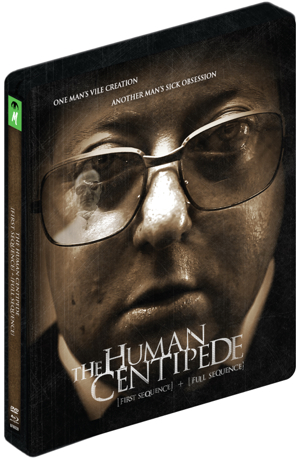 Special Features for the new release include:

Since its release, The Human Centipede (First Sequence) has become a worldwide cultural phenomenon. Inspired by a conversation over what punishment would be appropriate for convicted paedophiles, Tom Six's bizarre biological horror film has the distinction of being 100% medically accurate. The film went on to win more than 10 international awards including the awards for "Best Horror Film" and "Best Actor" at Fantastic Fest 2009, "Best Picture" at the 2009 Scream Fest and "Most Memorable Mutilation" at the 2010 Scream Awards.

The highly anticipated follow up, The Human Centipede 2 (Full Sequence) premiered in 2011 as the opening film at Fantastic Fest in Austin, Texas and made instant worldwide headlines when the BBFC banned the film outright in the UK claiming the film could potentially harm viewers. The controversy led to worldwide debates and major articles across the world press. After nearly four months of detailed discussion and debate, an agreement with the BBFC was reached and a viable cut of the film that did not compromise the level of horror, was released theatrically and on DVD and Blu-ray in the UK.

The Human Centipede films broke the mould, set a new standard in the horror genre and in the process went on to become major cult hits. Now for the very first time, both films will be released together by Monster Pictures as a collectable Four-disc Special Limited Edition Dual Format (Blu-ray & DVD) SteelBook, available from 29 October 2012.

The Human Centipede series of films are without doubt, the most original and demented horror films for many a decade - sick, twisted, deranged, and perverse, they are films that only surgery will remove from your mind.

Producer of the Centipede Series, Ilona Six, confirmed today recent tweets by Tom Six with the following statement about The Human Centipede 3.

"For all you fans of the Centipede Sequence Series, Principal photography on Human Centipede 3 will take place in the Southern states of the U.S and Writer-director Tom Six himself will play a supporting role in the film. The American finale will be 100% politically incorrect and will answer questions left lingering from the first films. The Human Centipede 3 will have a 500+ person pede. XXXXL American style!".

Further updates about the release of The Human Centipede 3 in the UK will be announced via the official UK Human Centipede twitter feed https://twitter.com/HmnCentipede_UK and Facebook page https://www.facebook.com/humancentipedeuk

That is a lot of poo! Fell sorry for the person at the end of the Centipede! and really who would be a fan of this series! It is mental!

cant fucking wait for the 3rd sequence! my friends and i have been imagining hege, cgi, building-crawling centipedes since we saw the last one--and now we hear this! dont fuckin' stop, you sick-ass six siblings! you're making some of the grosest flix we've ever seen--my girl janet laughed while puking!--we need # 3 so fuckin bad!

I hope you're just kidding...this movie is just plain fucked up. And very poorly written as well. If you really enjoy watching movies like this, there is something seriously wrong with you...and I'm not even joking right now.

They are sick films but can't wait to watch number 3 when is it out in the UK.