Review: TROUBLE WITH THE CURVE is a Stale Box of Cracker Jack Corniness

That is the word Mickey (Amy Adams) uses to describe her aged, curmudgeonly father (Clint Eastwood) in director Robert Lorenz' Trouble with the Curve, a dull, paint-by-numbers baseball feature that runs afoul of the far superior lines set by last year's Moneyball.

Eastwood stars as Gus Lobel, a grizzled baseball scout for the Atlanta Braves whose relentless "Get offa my lawn!" old-man schtick so fiercely grated upon my nerves during the first five minutes (in which he roughly chastised an inanimate object - in this instance, his silent partner was a troublesome prostate), that any and all interest I may have had for him was effectively ground to dust. Unlike the breed of grumpy old men who somehow manage to endear and charm despite their gruffness, Eastwood's Lobel is so over-the-top "unpleasant" as to spoil the entire movie, which is essentially built around the premise that Gus is an underdog the audience need root for.

In the winter of his storied career, the legendary baseball scout is caught between failing eyesight and a tenuous job contract with the Braves. It is the height of baseball's draft season and the old man is on the chopping block of obsolescence, close to being replaced by the kind of modern, predictive and cost-effective technology espoused (ironically) in Moneyball. Lobel is too proud to get treatment, so the stubborn old-timer's boss Pete (John Goodman) convinces Gus' daughter, ambitious attorney-cum-baseball nerd Mickey (as in, "Mantle"), to join him for a few days on the road to help him out. 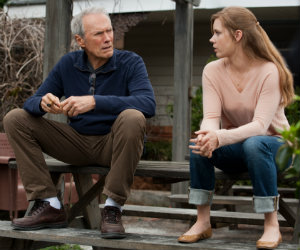 Theirs is a strained, contrary relationship ("daddy issues") that ultimately boils down to them being, essentially, exactly the same.  When Gus gets frustrated, he growls. And guess what? She does, too! Like father, like daughter. Grrrr.

Somewhere along the way, Johnny (Justin Timberlake), an ex-baseball player turned Red Sox scout who was discovered years ago by Gus, appears. Johnny is smitten with the complicated and emotionally aloof Mickey, impressed by her savant-level knowledge of obscure baseball trivia, bouncy hair, and ability to line-dance with local-yokels at the country bar. Gus encourages them to go on a really awkward, uncomfortable date that involves almost skinny dipping (this is a family film) and a kiss that contained a level of cinematic sexual tension reminiscent of the time Lorraine laid one on Marty in Back to the Future.

In his first outing (inning?) as director Robert Lorenz, who has made a decent career out of being Eastwood's Assistant Director (Million Dollar Baby, Mystic River, Midnight in the Garden of Good and Evil), strikes out by crafting a film that wallows in a stale brand of Crack Jack corniness that is made all the more frustrating because every actor in this picture has put in better performances elsewhere.

Here, in Eastwood's first appearance in a film he hasn't directed himself in decades, his saving grace as Gus is the audience's inherent familiarity of him; that self-effacing thing that happens when an actor's persona simultaneously plays into and obscures the good and the bad of whatever is happening onscreen. Separately, Adams and Timberlake are likable but as a romantic couple they are painfully miscast, every exchange between them an utterly transparent fallacy. 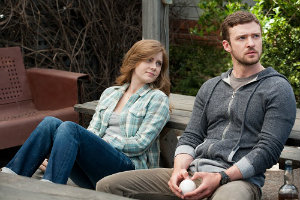 I would like to believe that bloated, emotionally manipulative Hollywood features with predictable three-act story structures ought to still have the potential to, at the very least, leave me feeling somewhat charmed. The real Trouble with the Curve was an unexpected and wholly unpleasant osmosis-like effect, inasmuch that I internalized its numerous failings and eventually caught myself growling (quietly) at the screen in the dark.

Trouble with the Curve

Do you feel this content is inappropriate or infringes upon your rights? Click here to report it, or see our DMCA policy.
Robert LorenzRandy BrownClint EastwoodChelcie RossRaymond Anthony ThomasEd LauterDramaSport

More about Trouble With The Curve