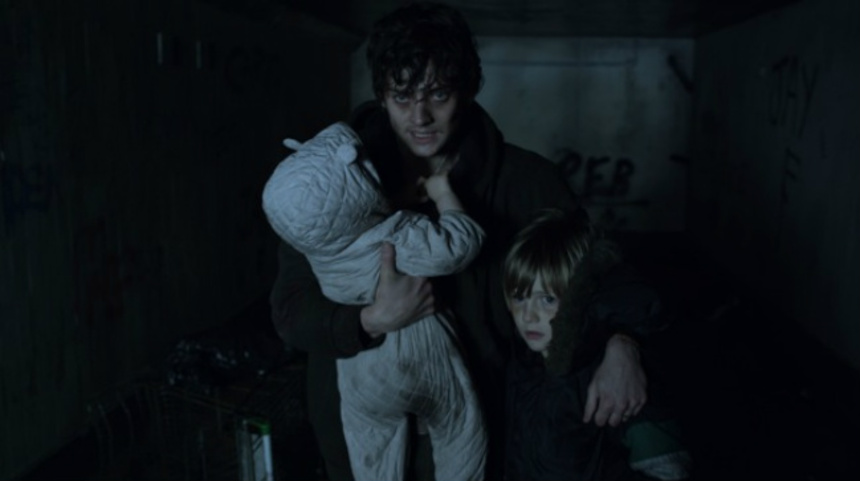 Normally, introductions by directors at film festivals are, at best, short, polite and a little funny and at worst, over-long, awkward and dull. But Ciaran Foy's brief introduction to Citadel at L'Etrange festival was something different altogether. Here, Foy explained briefly and without dramatic inflection that the film was inspired by a violent attack by children he survived and his own battle with agoraphobia that ensued. And thus, a film which remains planted firmly in the realm of the fantastic becomes infused with an unsettling sense of realism.

His story wouldn't be any more than an interesting, unfortunate aside if Citadel wasn't one of the most intense depictions of pure fear I've ever seen. In fact, the first hour is so nerve-racking and paranoia-inducing that I was a bit relieved when the film finally transitioned into slightly more traditional horror movie territory.

Set in a nearly abandoned neighborhood of housing projects, the film recounts a mental and physical battle between an agoraphobic man and a group of demonic, feral children who murdered the man's pregnant wife. Even if you didn't know the background information, Foy's connection to the material comes through viscerally and psychologically, and the result is a film that lingers for days. It especially lingered as I walked home to my apartment at 1:00 am after the screening.

The next day, I sat down with Foy to further discuss his personal history with agoraphobia and its relation to the film. What follows is an edited version of the interview. I'll publish part two, which delves deeper into Foy's personal history and gets into some spoiler-ish territory when the film is released stateside in October.

ScreenAnarchy: Let's start with your personal experience, which you mentioned in the introduction. Can you talk more about the attack and how the script developed through that?

Ciaran Foy: Well, when I was 18 I was the victim of a completely unprovoked and vicious attack by a gang of kids who were maybe 14 years old. I was beaten with a hammer and I had a dirty syringe held to my throat. The scariest part about it was that they didn't want anything or take anything -- There was absolutely no reason for it.

It left me with this trauma that eventually developed into agoraphobia. So I was housebound for a time, still living with my parents. At the time, I was scared shitless to even look at the front door, never mind contemplating walking outside. The door just became this Kubrick-like monolithic shape, which became important in Citadel eventually, with the design of the towers, the tomb etc.

Oddly it was the letter to say that I had been accepted into the national film school that prompted me to finally take the steps outside. At first I felt okay going out at rush hour when there were lots of people around. But if I was ever in a lonely area, if I was, for example, on a train alone, I would have a panic attack.

So how did you finally start to deal with it?

I met my wife back then my first year of school, and she encouraged me to go see this free counselor at college. I was very skeptical at first. I thought, "What, you sit here and talk to somebody and somehow you're cured?" But it ended up being the best thing I could have done.

One day, the counselor was discussing body language, and she said that research had indicated that a pedophile could walk into a room and immediately identify a former victim, just based on the tiniest amount of body language that you and I would take for granted. And she said similarly, these "street predators," which she called them; it's almost like they can see your fear. You can walk through the worst part of town and if you look like you know where you're going, they don't see you. But if you look like a victim, they see it.

That sentence stuck in my head for weeks. I just thought, what if that was literally the case? You know, that someone could see your fear -- that's a really creepy concept.

At the time I had no idea I was ever going to make a movie of it - I wasn't so narcissistic as to think I was going to make something based on my own life or anything like that. I was a geek and I just wanted to make sci-fi and horror films.

The idea for Citadel didn't come about until I left film school and I was toying around with various ideas and concepts. I had shot a short called The Faeries of Blackheath Woods, which had won awards and gotten me agency representation, so people started asking me, do you have any feature ideas?

The one thing I had was the idea of a creature that could see fear. Then it just occurred to me one day, "Why don't I make a nightmare version of what I went through?"  In a strange way, the more I thought about it, the more I thought that to really do an exploration of agoraphobia and the things I was going through, it almost required you to go into the fantastic. It's such an irrational fear and you're so paranoid... you really are sort of half seeing things and half hearing things. The world is painted in a different way, you see a different reality than everyone else. You see every street as a threat.

I really wanted to tell a story with a really subjective point of view, to put the audience in the head of an agoraphobic. So I began writing it, and it took six years to get it off the ground, but eventually we did it.

Were you still in an agoraphobic state when you were writing it or was it more like looking back?

It was certainly more like looking back, but in a very strange way. When I was writing the script, I had to place my mind into scenarios and situations that I'd rather forget. It brought back a lot of stuff. In the middle of writing it, I thought I was making myself take steps backward.

But, my personality sort of ended up echoing the arc of the character, so ultimately it was great because it is a story of redemption and of hope. By the time we were shooting it, I actually felt kinda good!

I wanted to ask about the setting, which is as crucial to the movie as the man's agoraphobia. It's like a nightmare neighborhood that he clearly doesn't have the means to escape. I was curious about your personal connection to this type of place and also just in terms of modern Ireland, how exaggerated is your portrayal of the neighborhood? Are there so many of residential wastelands?

There are a lot of wastelands, especially now because the construction industry has collapsed. And with the various cutbacks, a lot of the police stations near these working class communities which are isolated or further from the center have been completely neglected. Sometimes neighborhoods only have one bus, and if there's a problem with the bus, a strike or whatever, it's a no-go.

For example, there was a situation in the West of Ireland where, when the bus would come to this estate the kids would chuck rocks at the bus. So the company was just like, "Well, we're not going there." And then it just became completely isolated.

I haven't lived in a place that extreme, but my parents were working class people and I grew up in an estate. The attacks that happened to me took place a little outside my own area. In fact the main attack that happened took place when I was coming home from the cinema.

But certainly the palate of those types of houses with the larger tower blocks was a landscape which I grew up around and which I thought about when it came time to shoot the movie.
My parents are sort of proud of where they are, and it's true, there are so many great people in these buildings. But this nightmare version of the estates is my view of where I was at 18.

And that's why I was talking about subjective point of view. Sure, my area wasn't a ghost town and yeah, there weren't demonic feral kids everywhere, but it was that same kind of threatening location to me.

Can you tell me a bit about your history as a filmmaker? I know this is your first feature.

I went to film school, made a bunch of shorts,  and got out. Then I received funding for a short, The Faeries of Blackheath Woods. That was the most money I've ever had for a short: 15,000 euros. Most college shorts made for pounds and peanuts.

That film did very well, and since then I've just been writing Citadel. Also, the Irish film board offers a scheme called first draft loan where you can pitch them a project and, if they like it, they give you money to write that. I've written four of those, but mainly to pay the rent.

Are they receptive to genre projects?

It's harder. But, this year alone has seen the largest number of genre films come out of Ireland. For example, there's been Grabbers, Citadel, another one called Stitches.

And what are you working on now?

I'm working on a couple of things. Both are kind of in kind of embryonic form and both are sci-fi films. I'd really like to do a sci-fi movie next because making a really intense, dark horror film takes its toll on you. I can see why people write comedies set in the Bahamas. It's just easier.

Yeah, and you get to go to the Bahamas to shoot rather than dead-end housing projects...

Housing projects in the snow, exactly! But yeah, my two favorite genres are sci-fi and horror. But I've always felt that with sci-fi movies, you need a bit more of a budget. Whereas I think a lot of the best examples of horror actually benefit from a low budget.

On that note, are you being courted by Hollywood yet?

Yes, both of these would be for Hollywood. I've been trying to decide whether to move to London or LA, though I guess LA might be tricky with the visa thing. We'll see.
Tweet Post Submit