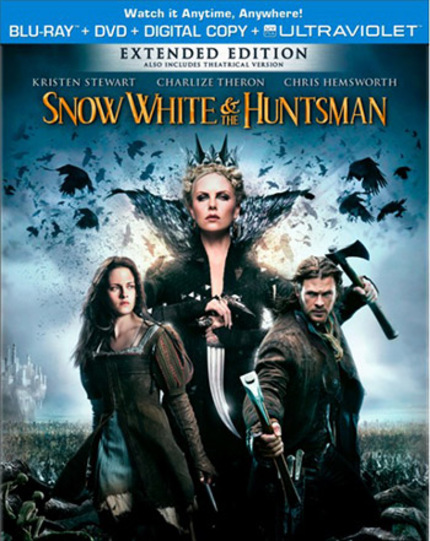 The instinct behind Snow White and the Huntsman is admirable, even if the execution ultimately falls flat: push the fairy tale into the realm of dark fantasy with a hint of political intrigue, with evil represented through the physical and emotional decay of the kingdom. There's even a dash of Miyazaki in there with an homage/direct lift (your mileage may vary) of the spirit of the forest scene from Princess Mononoke.

Unfortunately, in the push to handsomely design the hell out of everything, to cast it just right, no one was able to get this story of pure beauty versus pure wickedness to a place where audiences could give a damn about the characters in it. We're constantly told that Snow White is the fairest one of all who can restore the kingdom, but don't get a single emotion out of her besides sleepy-eyed fear until the final act (more on Stewart's performance later, but her performance isn't precisely the problem here), while her emotional connection to the Huntsman (Chris Hemsworth) and her Prince Charming (Sam Claflin, playing William) are barely sketched-in. The only character with any clearly defined motivation is Charlize Theron's Queen Ravenna, and she's simply a crazy person driven by childhood trauma.

The plot (such as it is): Queen Ravenna conquers the unnamed kingdom ruled over by King Magnus (Noah Huntley) after cleverly orchestrating her own "rescue" from an army of black glass warriors. The king is taken with Ravenna's beauty and makes her his Queen, and really he should have vetted his new wife more because on their wedding night, she poisons him and cuts out his heart. She then calls in her own army, led by her poorly-coiffed brother Finn (Sam Spruell), kills any and all resistance and has a pint-sized Snow thrown in jail.

Flash forward to a few years later, Snow White is now Kristen Stewart and Queen Ravenna is now having problems with her immortality spell and although she's been draining the life force and beauty from the local ladies, it's not enough--according to her magic mirror, the Queen can only keep the spell going using Snow White's blood (and handily, that's the same thing that could kill her, so...).

Well, Snow isn't having any part of that and makes her panicked escape into the Dark Forest. Cue Hemsworth's Huntsman, a brawny drunk grieving over the death of his wife who'll only do the job if the clearly established evil and manipulative Queen agrees to bring her back. From there it's a chase picture through the Dark Forest and later a siege picture as Snow marshals the kingdom's forces against the Queen.

But besides a couple of interesting setpieces (Snow's hallucinations), it all feels so slight. Beyond everyone telling us repeatedly how important Snow is, that never really manifests into any kind of character (she's mostly a prop dragged along until the final act where she's transformed into an action heroine). Hemsworth's character feels dragged out of a more energetic, light-hearted adventure until he's called on to do some serious brooding in the back half, and Theron...

Last year, she gave a career best performance as Mavis in Young Adult while here she might be showing us her worst as Ravenna. The outsized, slow-enunciating campiness of the role would be fine if she wasn't stuck attempting an awkward faux-Brit accent (the problem is that she extends her O's and W's making her sound like Elmer Fudd). Plus, the script slights the character by giving her a wounded little girl backstory that doesn't make us sympathize with her, but just makes hers and her brother's story seem more pathetic.

Plus, how can you cast seven great actors from the United Kingdom in the roles of the Seven Dwarves and then kind of shuffle them into a corner after that? I'd totally watch a movie with Ian McShane and those other six violent Dwarves getting into some trouble, but director Rupert Sanders and writers Evan Daugherty and John Lee Hancock don't really have time for much outside of the grim and dour.

Snow White and the Huntsman is by no means a terrible movie--it's just one with so few of the details penciled in that it's hard to remember. Stewart's perhaps lucky that she's not coming back for the proposed sequel since one film in, it's clear that no one involved really knows what do do with her character.

For all of my complaints about the actual film, Universal has given the movie a pretty packed home release. The Blu-ray/DVD combo set includes both the theatrical and four minutes longer extended cut of the film (I have no idea what the differences were here, sorry). Besides a technical but pleasantly conversational commentary featuring Sanders, co-editor Neil Smith, and VFX Supervisor Cedric Nicholas-Troyan, the disc includes:

Around the Kingdom 360-degree Set Tour: This basically allows users to select key locations from the film and rotate the camera around to get a better look during production. The interface is a little awkward, though, and it's sometimes a challenge backing in and out of screens.

The Magic of Snow White and the Huntsman: an approximately 13 minute special effects feature.

Citizens of the Kingdom: Three mini-docs focused on Queen Ravenna, Snow White, the Huntsman, and the Dwarves.

Reinventing the Fairy Tale: Sanders and co. talk about updating the fairy tale for modern audiences.

A New Legend is Born: Kind of a celebration of creating a brawnier take on Snow White (whether you feel that celebration is earned or not may vary by viewer).

Snow White and the Huntsman is available on DVD, Blu-ray, and VOD from Universal Pictures Home Entertainment.

Snow White and the Huntsman