Review: SNOW WHITE AND THE HUNTSMAN is Dwarfed By Its Messy Ending 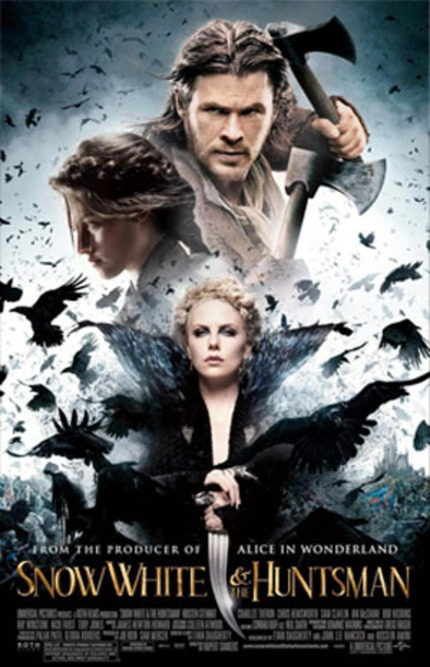 It's a long standing tradition that Hollywood brings us certain films in pairs. Antz came out around the time of Bug's Life, Volcano and Dante's Peak within weeks of one another, Armageddon and Deep Impact - the list goes on.

2012 saw this trend reignite with the release of two Snow White-themed films. Late Winter's Mirror Mirror starred Julia Roberts as the nasty queen, and for more than several reasons I skipped that flick. The one that actually looked promising, with its mix of genre actors capped by a dreamy monstrous Queen played by a genuinely capable actress was Snow White and the Huntsman (Shall we call it SWATH? Sure.). With its mix of Gothic-ish imagery and broad, brash character moments, one could hope based on the trailer alone that we were in for a back-to-basics take of the original grim, Grimm tale.

What's perhaps most confounding about the film is that it pairs even more fittingly with a genre flick that's one of the most anticipated of the year. From its sweeping prologue, its craggy vistas, and a mirror that has writing on it that looks more than a bit suspiciously like Tolkienian dwarvish runes, this isn't trying to be the second-ran Grimm tale, it's trying to be this year's first crack at The Hobbit tale.

First time director Rupert Sanders (there's not even a wiki page on the guy yet) has clearly spent his formative years watching the Lord of the Rings box set over and over. While shot in Great Britain, it's hard at times to separate the woods and craggy rock formations of SWATH from those found in New Zealand's Middle Earth. While we don't quite get the mountainous vistas that Jackson and co. provide, there's a slew of other visual cues that tie directly to the epic fantasy series.

Other elements borrow heavily from PJs take on this type of film. The first twenty minutes or so of the film are told in a sweeping prologue/flashback, situating the world of our characters quite effectively. There's some lovely shots during this period, establishing extremely well Charlize Theron's take on the evil Queen. From sensual milk baths to a slimy, oily mess towards the end, her take is equal parts psychotic and seductive. Theron is by far the best part of the film, her screeching, wide eyed menace unabashedly broad in its execution.

Naturally, the most iconic version of the Snow White story is the one that Disney brought forth as their first animated feature. There are plenty of allusions to that version despite the conscious effort to separate from the child-friendly take, such the Queen's headdress, with its drapery of metal sketching an outline that matches the animated original. There are other touches that speak to the iconic designs, from Snow White's billowing shoulders of her costume, to several shots of the party of our heroes and dwarfs walking through a cave. It's as if you come close to hearing subliminal whistles of "Hi-ho" at certain moments when they pass into the faerylands.

So far, so good - we've got a decent looking film, checking off the right boxes for homage while carving out its own thing. We have for the most part reasonably capable talent, a brilliantly cast Queen, and a suitably epic canvas to let the whole thing play out. We also have a pretty remarkable set of Dwarfs (boy hard to type that without resorting to the Tolkein use of "v"). The motley crew is made up of some of the finest British character actors going, from Ian McShane and Ray Winstone echoing their Sexy Beast banter, to Bob Hoskins, Nick Frost, and the fine talent of Toby Jones who was so damn good in Tinker Tailor.

There are bridges that end up being trolls, wild stags that transform into a flock of birds, and other moments of wonder and beauty that should all add up to be a terrific little film.

And yet, alas, it's a bit of a stinker. It's probably unfair to throw it all on the star of our film, but really the work does start to turn South the moment that Kristin Stewart shows up on screen. I've never seen a film from the Twilight series, but there's so much damn baggage with her pouty looks, especially when she's thrown into (another) love triangle, that it's hard to take any of her plight seriously. While all this excellent stuff is going on around her, we get a Snow White that's part Joan of Arc, part Arwen, and all pretty damn annoying throughout.

Chris Hemsworth doesn't quite step out from under his Thor role, and his accent is pretty preposterous, but he continues to show great on-screen charisma when brandishing a one-handed weapon. His backstory is pretty preposterous as well, and the hot/cold dynamic he shares with Ms. White is more difficult to believe than several of the magic creatures. The clunky addition of our dear Prince William is even more of an afterthought. Stiltedly portrayed by Sam Claflin, this Legolas-lite is an unwelcome addition to the plot, and makes for an even more turgid denouement.

By the time we reach our conclusion, with a seemingly interminable ride to storm a castle, whereupon it is breached in almost comically quick time, you simply don't care about the comings or goings of these characters. Only our dear evil Queen seems to have any stake in the game, a fact almost ruined by her own silly backstory that injects some unneeded humanity into her motives.

I can't help but think that on some level the whole shebang would have worked better if it weren't in English. Throw some subtitles on this, and it becomes some mad experimental film from Europe. Providing Spanish or French dialouge with more cleverly written text on screen might soften the edges of this misguided faerytale. In some ways, the entire thing is really is a severely dumbed down version of what Guillermo Del Toro might have brought to his version of the Hobbit, as under the missteps there's some lovely moments of wonder and play that remind of the likes of Pan's Labyrinth.

SWATH is more puzzling than it is unwatchable, squandering some really quite exceptional moments under the weight of a dreary and dull tale. Its appallingly incoherent ending (what, are you trying for a sequel?) does little to engender love for the work, but at the same time I felt myself thoroughly taken in by some of the more elegant parts of the piece. In the end, Snow White and the Hunstman is less a flawed success than a disaster with moments of transcendency.

Snow White and the Huntsman