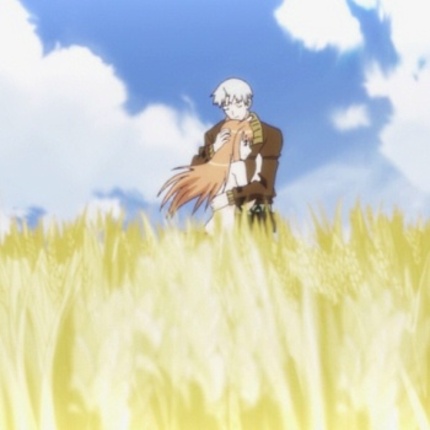 (If you watch only ONE bickering anime couple this year, watch THIS one!)

This week, Manga UK releases the second season of the anime "Spice and Wolf" on DVD. A few months back I reviewed the first season (link) and hopefully was able to convey how much I loved it. A fantasy anime about a guy and his goddess traveling through a medieval Europe, this is a series that could so easily be one of a dozen clichees yet manages to sidestep each and every one of them.

And the good news is: the second season does not falter, keeping the strong points of the series intact even when moving (literally) into somewhat different territories.
Which would conclude my shortest review.
Nah, I will elaborate anyway. Read on!

Holo and Lawrence are still travelling together on their horse-drawn cart, peddling wares from city to city. Their previous adventures has seen them successfully shake most of their burdens and they are getting closer to their final goals as they enter the more pagan lands in the North.
For Holo The Wise Wolf who is a harvest goddess in almost-human form, that goal is to return to her homeland after an absence of centuries. For Lawrence it is to get rich enough to stop peddling and set up shop somewhere.

But reaching their targets will also mean the end of their journey together as goddess and man, and both are loath to return to a life of loneliness. Witty banter and ceaseless bickering serve only to hide a growing fondness and desperation about a fate which seems inevitable... especially as neither of them will admit to their true feelings.
On top of that Holo and Lawrence manage to run into trouble again in every single city they enter. Both will have to trust each other more than ever, even though the very basis of their relationship is crumbling.

At the end of the first season we left on a pretty damn high point: Lawrence played a rather courageous and mean joke on Holo at a moment that was unwarranted and most hurtful to her. What made it such a great moment is that it finally got Lawrence some much-needed payback, and that he managed to get it without his throat being ripped out on the spot told volumes about both characters.

The second season starts with a "zero" episode, easing first-time viewers into the current situation by re-introducing Holo and Lawrence while they wrap up some leftover strands from the last episodes. And by wrapping up I mean getting spectacularly drunk.
After that it's going back on the road again. The series' main selling point is the excellently written developing relation between Holo and Lawrence, and the episodes in this season sure do not disappoint. As the two know each other a lot better now, the constant probing for each other's weak spots has entered a more poetic level. The caustic barbs become ever more eloquent and more bound by certain rules, and their courting of emotional disaster now looks exactly like that: a courtship.

This is not a straight romantic drama though: the two business partners get entangled in some pretty convoluted schemes again, resulting in immense financial risk or even physical harm to them both. That their mutual emotions are even more volatile than in the previous season only ups the stakes.
And the series once again deserves a medal for consistant world-building. The city-states visited in the second season are a noticeably different locale, but they obviously fit in the same world, surfing the same tide of history. Holo and Lawrence are still not in any way treated as having a big influence on local matters-of-state and can only hope to gain a bit by anticipating upcoming events correctly. Holo might be a goddess but "Spice and Wolf" keeps downplaying the 'superpowers' part, probably even more so now than in the previous season.

And that attitude really sums up the entire series. We have an extremely likeable cast of characters, a fantasy setting which is mostly rooted in harsh historical reality, and this is coupled with intelligent storytelling. I can only wish a third season will arrive sometime as there still do not seem to be any concrete plans for one. A pity, as the series of illustrated short novels on which the anime is based still provides plenty of stories past the last episode of this season...

Picking up where the previous season ended, "Spice and Wolf: Season 2" manages to keep the high quality of the series intact. It deepens the relationship(s) of Holo and Lawrence, never panders to easy fanservice, and takes place in a compelling world.
This release gets my highest recommendation, same as season 1 did. 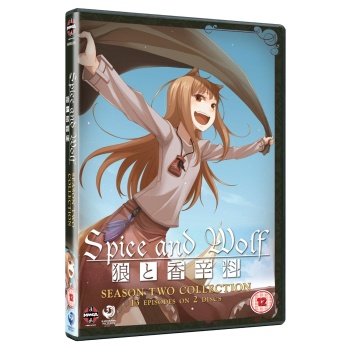 On to the DVDs:

Manga UK has released "Spice and Wolf: Season 2" on DVD only (PAL, coded for region 2), and there is no BluRay being planned, same as with the first season.
But also like with that release, I do not think this is a big deal and certainly no reason to miss out on this excellent series. The artwork still relies on "broad strokes" to get the message across and is never really all that intricate, meaning HD would not strictly be adding all that much. The presentation here is fully adequate in my opinion.

For sound we once again have Japanese and English soundtracks, defaulting to English (this is Manga UK after all). For the original track English subtitles are provided and these are very good.

What IS different between the first and second season is that this time, we have some honest-to-goodness extras! We have trailers and textless credits, same as before, but now we also get two small features: "Studying with Holo" and "Stretching with Holo - Yoitz Style". These two are fairly short pieces of harmless fanservice where Holo explains things to the viewer, and the stretching part even teaches you how to train wagging your tail and ears. It's all very silly and not even nearly approaching the level of the series itself, but it's a nice addition if you're a Holophile.

So once again Manga UK has provided a very decent (and decently priced) release of a truly excellent anime series. If people haven't already, I would urge them to check it out.

You can buy this discset through our affiliate (click here). 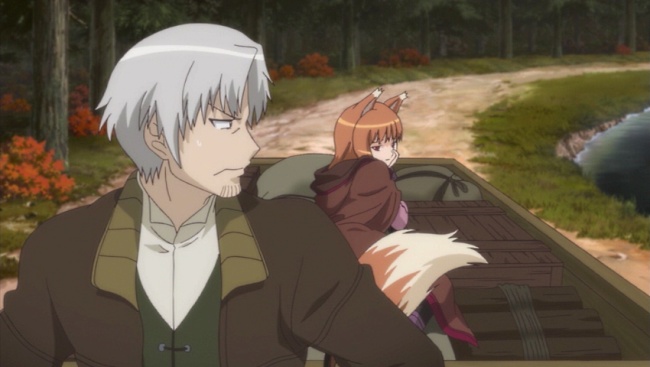