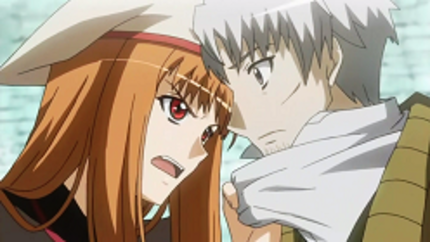 A slow, dialogue-heavy love story against a background of faux-medieval financial and political skullduggery, Spice and Wolf already stands out a mile in a medium where audiences frequently demand a battle to the death, a glimpse of cleavage or a snappy wisecrack every couple of minutes. Why should you be prepared to give it a shot? Review after the break.


Who was the last character in a Japanese animated television programme to strike you as an actual person? A fully realised individual with an inner life and dramatic impetus beyond giant robots locked in mortal combat, hackneyed pop-psychology or flashes of underwear? It's excusable to some extent when animators aren't [b]trying[/b] to make their cast do anything much beyond spout clumsy exposition, flash adolescent skin or carve up the landscape with psychic powers but when just one show turns up featuring principal roles that fairly leap off the screen, it's hard to shake the impression most studios' work is just wasted man-hours in comparison.

[i]Spice and Wolf[/i] takes place in a world very like medieval Europe (though in no clearly specified time period), where a travelling merchant by the name of Kraft Lawrence journeys from town to town doing business. After leaving one particular settlement where the villagers have been bringing in the harvest, he discovers he's picked up a stowaway named Horo, a naked girl with lupine ears and tail claiming she's the living incarnation of the local harvest deity. Times have changed; the influence of the church means the villagers are slowly discarding their older pagan beliefs; lost and abandoned, Horo wants to go home, back to the northern country where she was first born into the world hundreds of years ago.

So the two of them slowly journey north. Lawrence investigates what myths and legends he can uncover about Horo, while she puts her centuries of wisdom to good use helping him buy and sell his way to steadily bigger profits. Nothing explodes, more violence is threatened than ever takes place - there's skin, yet mostly just for the opening episodes, and even that relatively matter-of-fact (this being drawn from a world where fifteen was long past 'marriageable age') and not remotely graphic. There's bargaining, sleight-of-hand, currency dealing and political intrigue, like Neal Stephenson's [i]Baroque Cycle[/i] novels by way of Studio 4C's [url=https://screenanarchy.com/site/view/eight-rooks-review-of-princess-arete-from-studio-4/][i]Princess Arete[/i][/url].

This is not a visual show, in that most of the character development comes about through talking, and it clearly doesn't have the budget of the big franchises or the more successful niche productions. It is attractive enough, all the same; [i]Spice and Wolf[/i] started life as a series of light novels by Isuna Hasekura and the animated character designs are simple, clean and relatively faithful to artist Ju Ayakura's original illustrations. The world is obviously short on fine detail, but the pastoral colour palette out in the countryside and flat grey masonry in the urban sequences give the it a solidity and sense of place lacking in shows with many times the funding.

So, talking; [url=http://en.wikipedia.org/wiki/Light_novel]light novels[/url] (think that catch-all term 'young adult fiction') are a fairly pragmatic, direct form of writing (even reading fan translations makes this fairly obvious). Often formulaic, they progress rapidly from introducing a lead, to some contrived dramatic event setting the world on its head which gets the ball rolling, then into an episodic setup which intentionally mirrors sequential art - they are comic books in text form, basically, with few pretensions beyond a quick fix of pyrotechnic set-pieces or moderate titillation.

[i]Spice and Wolf[/i] the animation still lays everything out similarly explicitly. Characters launch into lengthy speeches come every new plot point to make sure the audience hasn't missed anything. Much of its success lies not only in how it makes even the most obvious exposition feel genuinely human but also in making it serve a [b]purpose[/b], something most of the competition rarely bothers to do. Yes, people will spend fully five, ten minutes detailing the vagaries of medieval coinage, the process of adulterating it, the political implications and the profits to be made as a result, but this is communicated in casual, witty back-and-forth repartee rather than a history lecture and it is made plainly obvious how everything that happens as a result affects the relationship between the principals.

This is doubly important given [i]Spice and Wolf[/i] is a love story at heart - period wheeling and dealing is only going to go so far - and a startlingly affecting love story thanks to Horo the wolf goddess, who is arguably one of the most memorable female leads ever realised. The idea of an ancient soul in a young person's body is hardly anything new, but Hasekura and television writer Naruhisa Arakawa take an archetype like, say, Anne Rice's Claudia (Kirsten Dunst' role from [i]Interview with the Vampire[/i]) and give it wholly unexpected levels of depth and subtext.

Given Horo [b]asks[/b] Lawrence to let her travel with him, their relationship could easily have been portrayed as seedy adolescent wish-fulfilment, yet [i]Spice and Wolf[/i] neatly sidesteps this while at the same time avoiding the self-conscious teenage bluster of most male-oriented action franchises. Horo sees time passing, feels herself being marginalised, knows on some level she's now always and forever alone. Her reaching out is portrayed as an honest request rather than any admission of weakness; she doesn't [b]need[/b] Lawrence, but she longs for company. Similarly, she's flirtatious, girlish (Horo's dialogue and speech patterns echo those of [url=http://en.wikipedia.org/wiki/Oiran][i]oiran[/i] high-class courtesans[/url]), but this is always with the clear understanding there are irreconcilable differences between the two of them. Lawrence is an obvious father figure to Horo, a mentor who's happy to learn from his student yet it's clear he's attracted to her - but also frightened by everything she represents.

Much of this is down to Ami Hoshimizu as Horo, who distinguishes herself among the Japanese cast with a breathtaking performance of exceptional range and nuance, never descending into stereotype or cliché. The voice acting on the whole speaks volumes; the growing bond between the two leads, the implications of everything they do and the things they can't bring themselves to say all come across in tone and delivery as much as the script.

[i]Spice and Wolf[/i] is hardly for everyone - slow and thoughtful, where the viewer's enjoyment depends on warming to the central couple, not to mention having the patience to sit through a primer on various aspects of medieval history which will strike many as deathly dull right from the first episode. For those willing to put in the effort, however, it is a hugely rewarding experience that becomes utterly compelling watching, witty and intelligent on a level far beyond most of its peers. Horo and Lawrence's relationship is beautifully drawn in every sense, moving and often heartbreaking stuff - warm, charming, sharply observed actual [b]people[/b] - that gets the highest possible recommendation.
Tweet Post Submit

Funimation has licensed the first series of [i]Spice and Wolf[/i] for US release later this year - their official website is [url=http://funimation.com/SpiceandWolf/]here.[/url]