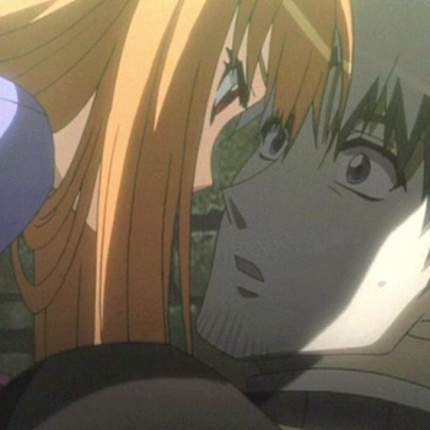 (Even if you bought it for the Spice, you'll love it for the Wolf...)

This week, Manga UK is releasing the first season of the Japanese animated series "Spice and Wolf" on DVD. And about time too as this initially aired in 2008.
But, as they say, all good things come to those who wait. "Spice and Wolf" is based on a series of illustrated novels, the last of which was published last year. The two seasons now in existence cover only part of that whole story but even if no further seasons are made, these ones cover separate story-arcs and each finale can be used as a valid stepping-off point.

Who would want to step off though? "Spice and Wolf" is one of the best anime I own, a fantastic mix of relationship comedy, historical drama, and some pagan legends.

The short review would be that I loved every minute of it. For the longer review, read on!

Lawrence is a young peddler who travels to cities and villages on a horse-drawn cart, selling his wares. One day he discovers a stowaway in his cargo: a naked girl with wolf ears and a fox tail who claims she is Holo The Wise Wolf, a pagan harvest goddess.
The two make an uneasy pact: Lawrence will guide Holo back to the Northern lands she calls home, and in return Holo will bring Lawrence luck with her divine powers.

But in a land where the Church is growing ever more powerful, having a pagan goddess at your side can be a major liability. As the balance of power shifts, so do the markets, and Lawrence is forced to enter some shady schemes to try and realize his dreams of getting rich. On top of that he starts to develop serious feelings for the chaotic Force of Nature called Holo...

Based on some of the screenshots and fan-art that are to be found online I thought it prudent to watch a couple of episodes of "Spice and Wolf" by myself prior to showing them to my wife. She has no built-in filter for any kind of fanservice bullshit whatsoever, and this means unfortunately that she just isn't able to enjoy most anime.
But nudity is not always the same thing as fanservice and I quickly asked her to join me for the first episode. In no time we had gone through the entire season, and immediately went on to the NEXT season.

You can put aside any preconceptions you might have about this being yet another typical Japanese animated series concerning some guy who shacks up with some superpowered girl(s), leading to all sorts of lewd and hilarious consequences.
There is none of that foolery here.

Instead, "Spice and Wolf" goes for depth and tries to keep the world as reality-based as possible. Holo has special powers but as she tries to avoid being spotted by the church authorities there are few opportunities for her to use them. The bulk of the series is therefore made up of Lawrence and Holo traveling and trying to make their latest business scheme work. You see their relationship develop to friendship (and maybe even beyond) but it starts purely on a business level, from which a game of underestimation and mutual respect commences. Their bickering contains an ever increasing amount of wit (season two will later ramp that up even more) and, after the first few tiny betrayals, occasional menace. Lawrence comes across as a push-over at first but is a bit more devious than meets the eye. Holo is haughty, expects to be suitably worshipped and constantly plays the naivety card while being all-knowing. (Sidenote: my wife kept referring to her as "That Little Bitch" which I think is hilarious.) As for the occasional nudity: Holo just doesn't give a shit if Lawrence sees her naked or not, even using it as a weapon against him at times, proving it to be HIS problem instead of hers. She is never shocked, bashful or subservient when unclothed and this is a big part of why the nudity is never irritating. And before you think nudity is a constant factor of the series, a selling point so to speak, it almost totally disappears after the second episode.

More importantly, quite a lot of time and effort is spent on conveying the economy of the lands Lawrence and Holo travel through. Basically the world is a patchwork of late-medieval to early-industrial city states, each with its own labyrinthine rules and currency. These cities all are the playground of Merchant Guilds, Governments, Banks and the Church(es), factions which are often at odds with one another and which require careful navigating when done business with.
The level of detail and believability of this economy is extraordinairy, and I do not know of its equal in anime. If I would be forced to compare it with something it would be the world in Neal Stephenson's "Baroque Cycle" books, or even Dorothy Dunnett's "Niccolo" series: a cunning mixture of conjecture and known practices based on historical research. The plot of "Spice and Wolf" never gets as epic or sprawling or world-changing as the stories in those books, but it sure dips its toes in the same quality pond. It makes you feel like Lawrence and Holo are only small cogs in a big world who, despite having their own plans, are constantly swept along in a grander scheme of things.

I'll refrain from gushing too much lest I either start to spoil plot points or overcharge people's expectations. This is a slow series but it gains weight because it adheres firmly to an iron sense of continuity. Even stand-alone episodes leave effects which alter things further on in the series, and actions always have permanent consequences.
Lawrence and Holo's initial plans of getting rich (him) and getting to the North (her) do not change, but both quickly realize that it will never be quite as simple as they once thought...
Seriously folks: "Spice and Wolf" is an absolute delight.

This is one of the best fantasy series I have ever seen. I was impressed by the complexity and believability of the described world, I was intrigued by the story and I cared about the characters. In fact, I loved this delightful series from start to finish and "Spice and Wolf" comes with my highest recommendation. 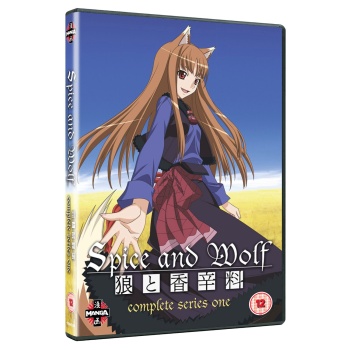 Manga UK is releasing "Spice and Wolf: Season 1" as a two-disc DVD set which is region 2 Pal encoded. While I understand people are disappointed that there is no BluRay being planned at this point, do know that the artwork used here does not rely much on fine detail or intricate patterns, meaning that there isn't THAT much difference between an upscaled DVD and a BluRay. Yes these are normally sacrilegious words, especially coming from me, but in this specific case I seriously do not expect SD to be a big issue except maybe on the largest screens.

So video is fine in my book. For audio there is both an English dub and the original Japanese soundtrack, with excellent English subtitles.
As for extras, there hardly are any. You get some trailers and the textless versions of the opening and closing credits, and that's it. Mind you, that is exactly what you got on the US version as well so do not feel short-changed. The series itself is well-represented here and is a treat, especially since the UK edition is very attractively priced (meaning: low, as I'm Dutch).


"Spice and Wolf: Season 1" is on sale in the UK from the 18th of June onward. You can buy this discset through our affiliate (click here). 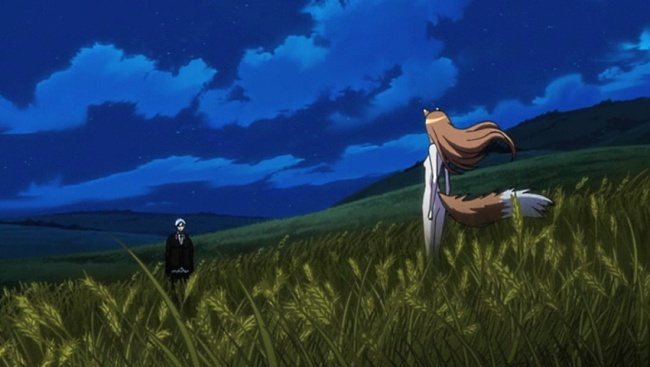